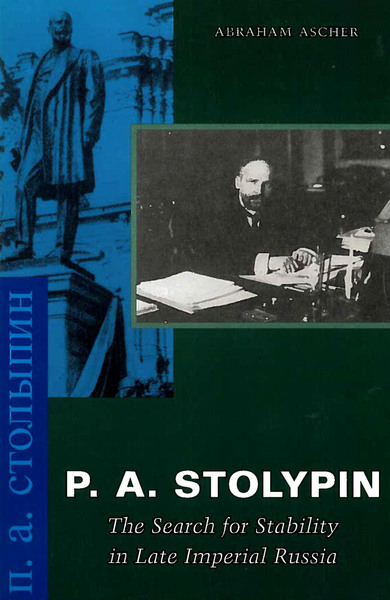 P. A. Stolypin
The Search for Stability in Late Imperial Russia
Abraham Ascher

This is the first comprehensive biography in any language of Russia’s leading statesman in the period following the Revolution of 1905. Prime Minister and Minister of Internal Affairs from 1906 to 1911 (when he was assassinated), P. A. Stolypin aroused deep passions among his contemporaries as well as subsequent historians.

In the twilight of Nicholas II’s reign he was virtually the only man who seemed to have a clear notion of how to reform the socioeconomic and political system of the empire. His efforts in that direction—in agriculture, local administration, religious freedom, social legislation, the legal system—were radically new departures for the Russian state. His detractors disdained him as a power-hungry, coldhearted politician who was unscrupulous in pursuing his own career and would use any means to restore the tsarist autocracy following the frightening turbulence of 1905. Stolypin’s admirers, however, argued that he was a man of vision who pursued policies that would have transformed the country into a modern state with social and political institutions comparable to those of the West.

Lenin’s celebrated denunciation of Stolypin as “hangman-in-chief” set the tone for official Soviet work on his career. In the West, some historians and émigré writers, most notably Aleksandr Solzhenitsyn, erred in the opposite direction. By contrast, this book—on the basis of extensive Russian archival documentation only recently available to historians—seeks to provide a balanced portrait of Stolypin that encompasses the complex, even divergent, impulses that motivated him.

Although Stolypin did not shrink from the use of force to stamp out unrest, he lamented the shedding of blood and much preferred nonviolent means to curb the opposition. In foreign affairs, he was uncompromising in his insistence that Russia should avoid entanglements that could lead to military conflict. To be sure, he was deeply committed to monarchical rule, but he did not consider it advisable to abolish the elected legislature or to deprive it of its authority. Stolypin’s program, a blend of reformism, authoritarianism, and nationalism, was more likely than any other to lead Russia toward social and political stability. But Tsar Nicholas II, his entourage, and ultra-conservatives could not bring themselves to yield a portion of their privileges and prerogatives in return for a reduced, though still significant, role in a changed Russia. They succeeded in undermining the Prime Minister’s attempts at fundamental reform and thus scuttled Imperial Russia’s last such attempt before its demise.

Abraham Ascher is Distinguished Professor of History at the Graduate Center of the City University of New York.

"In a major speech last year, Russian President Vladimir Putin referred to Stolypin in laudatory terms, . . . presumably a signal of Mr. Putin's own intended balancing act between reformer and authoritarian tough-guy. With Mr. Ascher's highly readable biography, we're all better placed to understand the legacy that Mr. Putin inherits. . . . A book well worth waiting for. . . . P. A. Stolypin is carefully researched, well argued, and highly readable."

"The first major biography of Petr Arkadevich Stolypin, prime minister and minister of internal affairs of the Russian Empire from 1906 unitl his assassination in 1911. This is a major contribution to our understanding of these important years following the 1905 revolution and will be welcomed by all students of the period."

"This book makes a significant contribution to our understanding of Stolypin . . . more than any previous work, it examines thoroughly and in detail the major episodes of Stolypin's political career. Ascher's treatment of these controversial issues is invariably careful, judicious, and illuminating. . . . Ascher has plumbed archives not just in Russia, but in Helsinkin, Bonn, and Vienna and in a wealth of documentation goes far beyond previous studies. . . . There will always be a place for thoroughly researched, carefully thought-through, and well written narrative history. Abraham Ascher's Stolypin is a fine example of this genre and is required reading for any serious study of Russian history."

"His work may well set off a new trend in the scholarly investigation of prerevolutionary Russia."

"Ascher's masterful account gives the prime minister the credit that he deserves, but it also creates the sad image of a well-intentioned reformer who was the victim of his devotion to the monarchy (so inadequately embodied in Nicholas II), of his own uncompromising nature, and of his readiness to use illegal means to implement reforms."

"...this elegantly argued and well-written book throws new light on a controversial figure...and deserves the wider audience that a paperback edition would make possible."