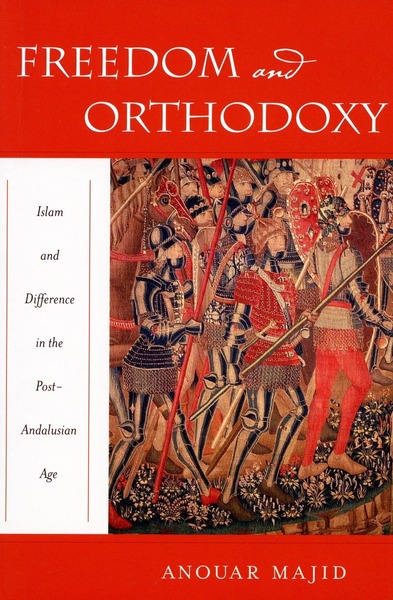 This book argues that the "clash of civilizations" that is supposed to be a feature of the post-Cold War environment is not necessarily caused by the dogma of world religions or cultural incompatibilities but by the inflexible and hegemonic universalisms that have characterized world history since 1492—a cultural outlook that Majid terms post-Andalusianism. The all-encompassing worldviews of Euro-American ideologies have resulted in the retreat of Islam and other non-European traditions into dangerous orthodoxies and a growing climate of suspicion, fear, and terror.

Freedom and Orthodoxy offers an alternative to perennial discord, suggesting that the world needs a philosophy of the "provincial," one that reattaches individuals and societies to their heritages and memories but connects them to the rest of the world in solid, non-alienating, meaningful ways. For this to happen, Majid contends, globalization must be reimagined as a network of human solidarities and rigorous conversations across the world's multiple cultures, not as a mechanical process of economic expansionism.

Anouar Majid is Professor and Chair in the Department of English at the University of New England in Maine.

"In Freedom and Orthodoxy, Majid presents a strong argument for demolishing of what he sees as 'the homogenizing tendencies' (religious, cultural, and economic) of Western universalism . . . Majid shows an impressive understanding of the critical moments and issues of the twentieth century world . . . "

" . . . Majid presents an all-encompassing view of significant aspects of history and suggests new conceptual avenues that may enable the world (including Muslims and non-Muslims) to move toward peace and harmony."

" . . . Majid's book is an ambitious work that weaves back and forth between writings by contemporary scholars, journalists, and political pundits, to great sweeping reviews of post-1492 world history centering on Europe, the American Revolution, and the treatment of indigenous peoples by Spanish and English colonists."

"This is an impressive book, written by an unrelenting scholar. The book is very well researched in terms of facts, very analytical, systematic and compelling in its arguments and above all unassailably profound, even passionate, in its substance."

"Freedom and Orthodoxy is a brilliant apology for dismantling the hegemonic and false pretensions of western universalism in favor of a world in which local groups are allowed to construe their own strategies for cultural, political, and economic flourishing Majid expands and deepens his historical and philosophical analysis, exhorts both Muslims and westerners to search their souls, remove the roots of their own cherished certainties that exclude the Other (i.e., fundamentalisms), and engage in the path of creative dialog."American Journal of Islamic Social Sciences