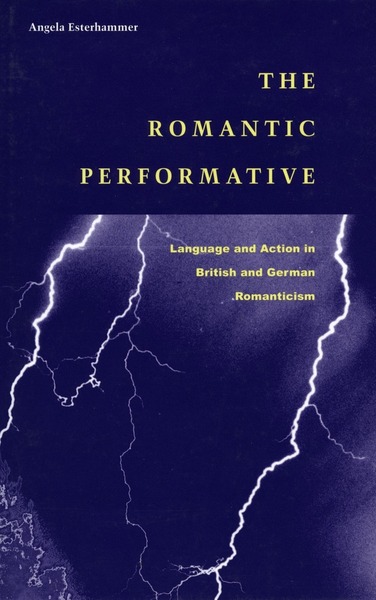 The Romantic Performative develops a new context and methodology for reading Romantic literature by exploring philosophies of language from the period 1785-1835. It reveals that the concept of the performative, debated by twentieth-century theorists from J. L. Austin to Judith Butler, has a much greater relevance for Romantic literature than has been realized, since Romantic philosophy of language was dominated by the idea that something happens when words are spoken.

By presenting Romantic philosophy as a theory of the performative, and Romantic literature in terms of that theory, this book uncovers the historical roots of twentieth-century ideas about speech acts and performativity. Romantic linguistic philosophy already focused on the relationship between speaker and hearer, describing speech as an act that establishes both subjectivity and intersubjective relations and theorizing reality as a verbal construct. But Romantic theorists considered utterance, the context of utterance, and the positions and identities of speaker and hearer to be much more fluid and less stable than modern analytic philosophers tend to make them. Romantic theories of language therefore yield a definition of the "Romantic performative" as an utterance that creates an object in the world, instantiates the relationship between speaker and hearer, and even founds the subjectivity of the speaker in the moment when the utterance occurs.

The author traces the Romantic performative through its diverse development in the moral, political, and legal philosophy of Reid, Bentham, Kant and the German Idealists, Humboldt, and Coleridge, then explores its significance in literary texts by Coleridge, Godwin, Hölderlin, and Kleist. These readings demonstrate that Romantic writers mounted a deeper investigation than previously realized into the way the act of speaking generates subjective identity, intersubjective relations, and even objective reality. The project of the book is to read the language of Romanticism as performative and to recognize among its achievements the historical founding of the discourse of performativity itself.

Angela Esterhammer is Professor of English and Comparative Literature at the University of Western Ontario.

"In her learned and wide-ranging The Romantic Performative: Language and Action in British and German Romanticism, Angela Esterhammer demonstrates, among other things, that there was something like a proto-Austinian reflection on the often performative character of language. . . . This is a book that anyone studying performative language in the Romantic period will have to reckon with, and from which they will learn a good deal in the process."

"Into an atmosphere charged with the recovery and reengagement of literary texts, Angela Esterhammer's effort to recover the notion of history as "intrinsic rather than extrinsic to Romantic texts" comes as a welcomed contribution."

"Through its close attention to philosophical detail, its bold comparatist approach, and its awareness of contemporary debate, this book is a rich and rewarding exploration of Romanticism's hidden riches."