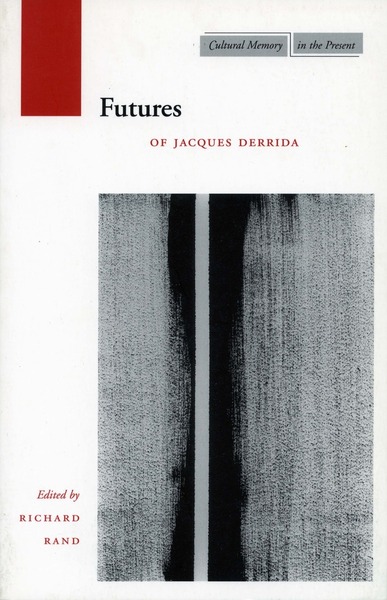 Seven eminent authors, all known for their work in deconstruction, address the millennial issue of our “futures,” “promises,” “prophecies,” “projects,” and “possibilities”—including the possibility that there may be no “future” at all. Speculative in every sense, these essays are marked by a common concern for the act of reading as it is practiced in the work of Jacques Derrida. The contributors—Geoffrey Bennington, Paul Davies, Peter Fenves, Werner Hamacher, Jean-Michel Rabaté, Elisabeth Weber, and Jacques Derrida himself—study a range of authors, including Pascal, Kant, Hegel, Leibniz, Marx, Benjamin, Koyré, Arendt, and Lacan.

These readings are neither prescriptive, definitive, nor definitional. Each essay seeks out, in the work it studies, those moments that pronounce or propose futures that enable speculation, moments in which the speculator has to make promises. As Derrida says in his essay, “Between lying and acting, acting in politics, manifesting one’s own freedom through action, transforming facts, anticipating the future, there is something like an essential affinity. . . . The lie is the future.” Or, in the words of Werner Hamacher, “The futurity of language, its inherent promising capacity, is the ground—but a ground with no solidity whatever—for all present and past experiences, meanings, and figures which could communicate themselves in it.”

These essays, though arising from deconstruction, point out the ways in which deconstruction has yet to occur, and they do so by scanning the unattainable horizons marked off by thinkers at the forefront of our modern era.

Richard Rand is Associate Professor of English at the University of Alabama (Tuscaloosa). He has translated texts by Derrida and is the editor of Logomachia: The Conflict of the Faculties.

"This book, which includes a major piece by Derrida, may serve as a switching station, a relay that amplifies the legacy of deconstruction, demonstrating its continuing vitality and even more its necessary relevance for the questions of politics and ethics that face us in the new century."

"At its best moments. . . . this collection. . . . is no longer a representation of a label or a proper name, but a weave of exceedingly probing questions that traverses labels, legacies and proper names in an unexpected pattern."