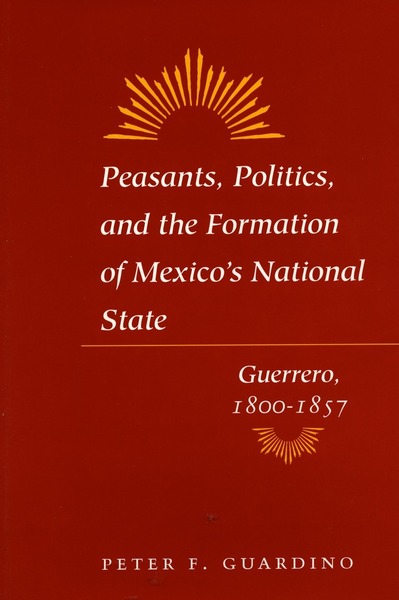 This is a study of the important but little-understood role of peasants in the formation of the Mexican national state—from the end of the colonial era to the beginning of La Reforma, a moment in which liberalism became dominant in Mexican political culture.

The book shows how Mexico's national political system was formed through local struggles and alliances that deeply involved elements of Mexico's impoverished rural masses, notably the peasants who took part in many of the local regional, and national rebellions that characterized early nineteenth-century politics. These rebellions were not battles over whether or not there was to be a state; they were contests over what the state was to be. The author focuses on the region of Guerrero, whose peasantry were deeply involved in the two most important broadly based revolts of the early nineteenth century: the War of Independence of 1810-21, and the 1853-55 Revolution of Ayutla, the rebellion that began La Reforma.

The book's central contention is that there are fundamental links between state formation, elite politics, popular protest, and the construction of Mexico's modern political culture. Various elite groups advanced different models of the state, which in turn had different implications for, and impacts on, the lives of Mexico's lower classes. Contesting elites formed alliance with segments of Mexico's peasantry as well as the urban poor and these alliances were crucial in determining national political outcomes. Thus, the participation of wide sectors of the population in politics for varying reasons—and the subsequent learning of tactics and elaborations of discourse—left an enduring mark on Mexico's political system and culture.

"This is an outstanding book. I know of no other work on the first half of the nineteenth century for Mexico (or elsewhere in Latin America, for that matter) that so consistently addresses the complexities and multiple facets of postcolonial political conflict. The author takes rural people seriously, and shows convincingly how they affected and were affected by state formation and attempts to build national policies."

"[Peasants, Politics, and the Formation of Mexico's National State] tell[s] us a great deal about the so-called Mexican Dark Ages and show[s] that the decades of apparent chaos and conflict were based on popular participation in state builing."