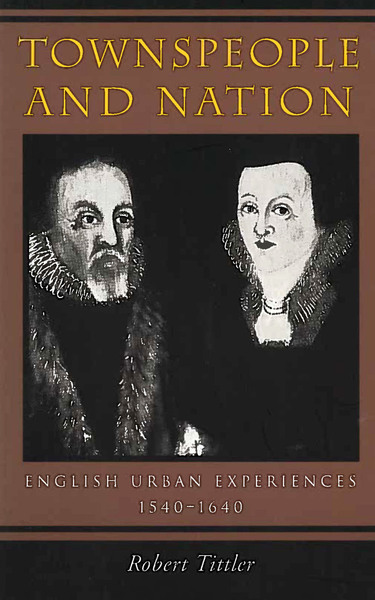 The century bounded by the Henrician Reformation and the Civil Wars marked an important stage in the development of urban institutions, culture, and society in England. At the outset of this period, England was still very much an agrarian society; by its end, it was well on the way to becoming an urban one as well. The complexity and subtlety of those developments become especially vivid when we experience them through the lives of more or less ordinary townspeople, which Tittler allows us to do here.

These biographical studies not only have much to tell us about the time and milieu, but also provide an array of interesting and varied characters: Henry Manship, the historian of his native Yarmouth; Henry Hardware, who removed “the giant, the naked boys and the devil in feathers” from Chester’s Midsummer Show; Robert Swaddon the swindler and John Pulman the “thief-taker” of London; Joyce Jeffries, the spinster money-lender of Hereford; John Brown, the speculator in dissolved monastic lands in Boston; John Pitt, the overseer of guildhall construction in Blandford Forum; John and Joan Cooke, the Mayor and Mayoress of Gloucester, the subjects of a most revealing posthumous portrait; and Sir Thomas White of London, the philanthropist and “merchant hero.” Tittler introduces these studies with a comprehensive but succinct description of English towns and cities of the time.

Robert Tittler is Professor of History at Concordia University, Montreal. His most recent book is The Reformation and the Towns in England: Politics and Political Culture, c. 1540-1640.

"We know much more about the court and the country in early modern England than we do about urban society and life. What Tittler . . . does successfully in this fine and innovative book is to tell us about this relatively hidden England and to give it a human face by discussing specific individual lives."

"This brief book will enhance Robert Tittler's reputation as a sensitive interpreter of the early modern English urban experience. . . . All of the stories are interesting and well told. . . . Robert Tittler has written a short, but fascinating book on English urban life from about 1540 to 1640. Everyone interested in early modern England will profit from reading it."

"In this very readable and engaging collection of essays, Tittler aims to "help us understand 'the ordinary' to an extraordinary extent," and he succeeds admirably by fully exploiting the chance remains of a few individuals' lives to re-tell their stories. . . . The book is a model for historians willing to broaden their source base and their methods, and committed to keeping people and their stories at the center of urban studies."

"Townspeople and Nation is dedicated to the notion that scholarly reconstructions of the lives of individual townsmen and women can reveal much about the history and structure of towns and cities in the past. Each of the author's eight detailed biographies succeeds splendidly in this avowed purpose . . . .Tittler's essays have established that taking a biographical rather than a 'communal' or 'town-based' approach to urban history is not just a valid approach, but an exceptionally revealing one . . . .[Townspeople and Nation] represents an implicit challenge to urban historians to make more sustained attempts to uncover the processes underlying urban history via the reconstruction of the lives of townsfolk. The material for such work is plentiful, and there are of course scattered examples or urban biographies or case-studies, but few which draw out the general lessons from the particular example with as much skill and clarity as Professor Tittler."

"Tittler has painted for us a series of portraits in words of some significant and interesting townsmen, and his book will be read with profit by students and their teachers."

"We have here a book that brings into sharp, human focus some of the many people who shaped and energized English towns between the Reformation and the Civil War, and for that we are grateful."