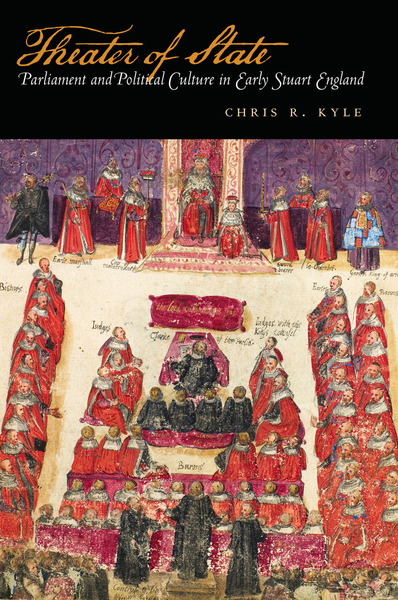 This book chronicles the expansion and creation of new public spheres in and around Parliament in the early Stuart period. It focuses on two closely interconnected narratives: the changing nature of communication and discourse within parliamentary chambers and the interaction of Parliament with the wider world of political dialogue and the dissemination of information. Concentrating on the rapidly changing practices of Parliament in print culture, rhetorical strategy, and lobbying during the 1620s, this book demonstrates that Parliament not only moved toward the center stage of politics but also became the center of the post-Reformation public sphere.

Theater of State begins by examining the noise of politics inside Parliament, arguing that the House of Commons increasingly became a place of noisy, hotly contested speech. It then turns to the material conditions of note-taking in Parliament and how and the public became aware of parliamentary debates. The book concludes by examining practices of lobbying, intersections of the public with Parliament within Westminster Palace, and Parliament's expanding print culture. The author argues overall that the Crown dispensed with Parliament because it was too powerful and too popular.

Chris R. Kyle is Associate Professor of History at Syracuse University. He is the editor ofParliament, Politics and Elections (2001) and The Oxford Works of Francis Bacon, Vol VII: Legal and Political Writings 1613–1626 (forthcoming).

"This study is a very major effort to reassemble the culture of parliamentary politics in a way that is historically and historiographically innovatory and welcome."

"In cleverly framing his study, Kyle gives himself every chance to write a new and substantial account of early Stuart parliaments that are fully contextualized in contemporary metropolitan culture . . . Kyle's fine empirical work is suggestive of a host of processes that explain the transforming and transformative role of parliament in English society"

"The picture of Parliament that emerges from Kyle's study is one of a robust institution taking on new functions and responsiblities, and despite (or because of) conflict with the Crown, deeply engaged with a public that eagerly followed its affairs."

"Chris Kyle illuminates for us a much broader portrait of parliament, especially by bringing to life the character of the sessions and the nature of the environment in which the houses met."

"Concise and well written, the volume makes a contribution to the political atmosphere that provided the context for the destruction of trust in 1640. It was theater in one sense, but it had real consequences."

"This graciously written synthesis of the growing interaction between Parliament and the public sphere will prove to be a useful book for scholars interested in the institutional and cultural worlds of politics and print in early seventeenth-centruy England. It is particularly valuable for the meticulous annotation and full bibliography that provide the reader with ready access to all of the archival and printed primary materials of the period as well as to relevant secondary works."

"Kyle concludes that during its eight sessions in 1621-29, Parliament became too powerful and too popular for Charles I. . . . Kyle's somewhat controversial conclusions are thoroughly researched and vigorously argued. Summing Up: Recommended."

"Kyle frames the demotics, theatrics, and staging of parliamentary speech in terms of the history of communication. No account of early modern politics will be complete without reference to the murmuring, hissing, shouting, and silences that this books reveals."

"Kyle will wake everyone up. He has an inspired idea of setting parliamentary history firmly within contemporary political culture, arguably the most influential mode of scholarly analysis in the period. This book could well transform the field."