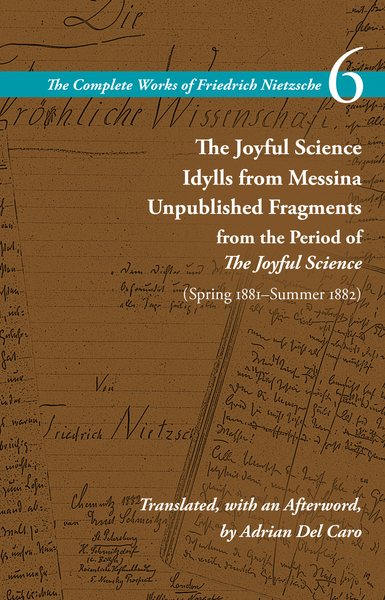 Written on the threshold of Thus Spoke Zarathustra during a high point of social, intellectual and psychic vibrancy, The Joyful Science (frequently translated as The Gay Science) is one of Nietzsche's thematically tighter books. Here he debuts and practices the art of amor fati, love of fate, to explore what is "species preserving" in relation to happiness (Book One); inspiration and the role of art as they keep us mentally fit for inhabiting a world dominated by science (Book Two); the challenges of living authentically and overcoming after the death of God (Book Three); and the crescendo of life affirmation in which Nietzsche revealed the doctrine of eternal recurrence and previewed the figure of Zarathustra (Book Four). Invigorated and motivated by Thus Spoke Zarathustra and Beyond Good and Evil, Nietzsche in 1887 added a new preface, an appendix of poems, and Book Five, where he deepened the critique of science and displayed a more genealogical approach.

This volume provides the first English translation of the Idylls from Messina and, more importantly, it includes the first English translation of the notebooks of 1881–1882, in which Nietzsche first formulated the eternal recurrence. Structurally and stylistically, The Joyful Science remains Nietzsche's most effective book of aphorisms, immediately after which he took on the voice and alter ego of Zarathustra in order to push beyond the boundaries of even the most liberating prose.