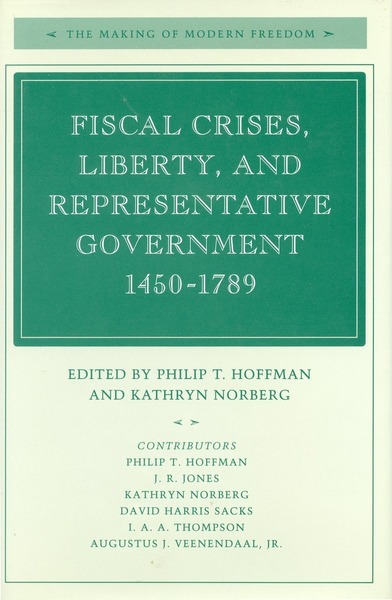 This volume, one of the books in the "Making of Modern Freedom" series, is a collection of essays by eminent historians who explore the relationship between state finance and political development in fifteenth and sixteenth century Europe. They analyze how during this period European states were engaged in nearly continuous warfare and how those warfares produced fiscal crises. As a result, rulers were forced to enter into novel fiscal agreements with their subjects, often providing their subjects more political power, in exchange.

The volume begins with two essays on England. David Harris Sacks traces the politics of government finance from the fifteenth century to the eve of the Civil War, and J. R. Jones carries the story forward into the eighteenth century, when representative government was jeopardized by new and powerful financial interests. The third essay, by Augustus J. Veenendaal, Jr., explains why the Netherlands' exceptional ability to raise money by taxes and loans allowed them to wage war without the severe financial difficultes experiencd by other European powers. Two essays on Spain by I. A. A. Thompson follow the changing fortunes of the Cortes of Castile, relating its role to the desperate manipulation of Spanish fiscal policy as it came into conflict with the dearly held liberties of Castilian citizens.

The two final essays deal with the consequences of absolutism in France. Philip T. Hoffman details the fiscal effect of noble privileges and explores the political ramifications of the country's repeated financial crises, and Kathryn Norberg explains why the fiscal crisis of 1789 finally brought down the monarchy.