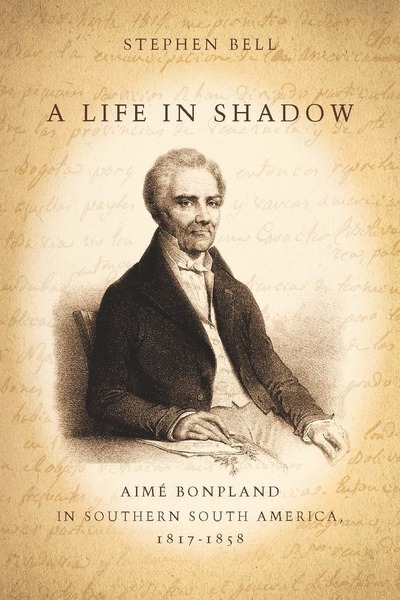 French naturalist and medical doctor Aimé Bonpland (1773–1858) was one of the most important scientific explorers of South America in the early nineteenth century. From 1799 to 1804, he worked alongside Alexander von Humboldt as the latter carried out his celebrated research in northern South America, but he later returned to conduct his own research farther south. A Life in Shadow accounts for the entire span of Bonpland's remarkable and diverse career in South America—in Argentina, Paraguay (where he was imprisoned for nearly a decade), Uruguay, and southernmost Brazil—based on extensive archival material. The study reconnects Bonpland's divided records in Europe and South America and delves into his studies of rural resources in interior regions of South America, including experimental cultivation techniques. This is a fascinating account of a man—a doctor, farmer, rancher, scientific explorer, and political conspirator—who interacted in many revealing ways with the evolving societies and institutions of South America.

Stephen Bell is Associate Professor of Geography and History at UCLA. He is the author of Campanha Gaúcha: A Brazilian Ranching System, 1850–1920 (Stanford University Press, 1998), which was awarded the 1999 Warren Dean Memorial Prize.

"[A Life in Shadow] is a wonderful contribution to scholarship on science in Latin America, and also to the understanding of the relationship between science and culture during the first half of the nineteenth century. It is also a perfect illustration of how scientific thought and location work together . . . [W]ithout a doubt, this book will be a mandatory reference for all future publications of the subject, as it will be for anybody interested in the science of this period, whether from a Latin American or European perspective."

"Stephen Bell's book convincingly shows that Bonpland deserves much more than a quick footnote in the historical studies of nineteenth-century European and Latin American natural history, science, and agriculture . . . The greatest strength of the book is the superb research in archives and primary sources carried out by the author . . . Bell has produced an excellent work that will interest many scholars. By constantly and aptly contextualizing Bonpland's life the book turns out to be about much more than just this French naturalist; rather, it conveys important reflections on southern South American history."

"Along the book, Bonpland emerges as a key element of the circuits of exchange of data, information, and natural history collections that connected European and South American worlds. Moreover, this book displays how the scientific endeavors of Bonpland cannot be separated from his interests in commerce of local products, the adaptation of exotic species to South American environments, his connections with the French merchant houses, and the importance of the navigation routes of the Parana river for scientific exploration, the trade and international politics. Bell's book is a clear indication that history of science and rural history can learn from each other."

"Bell's book is a praiseworthy, highly readable, and most welcome account of Bonpland's last forty years of life, spent in various places and in different activities in the southern part of the continent. This account is based on a thorough effort to collect and systematically analyze, from an original perspective, a wealth of documents that until now had remained only partially or poorly executed . . . [A Life in Shadow] also illuminated often overlooked, but highly significant aspects of the social and economic dimensions of life in various regions of the southern part of the continent during the first half of the nineteenth century. Thus, the book is recommended reading for an audience whose interests range beyond the biographical dimensions of a unique European intellectual with broad domains of activity and deep involvement in American life, to readers who are also interested in the early history of scientific activities in the continent."

"This most impressive work of historical scholarship is the result of research conducted over the better part of two decades by Stephen Bell, who is indubitably the world authority on Bonpland . . . Bell gets the very best out of his materials in etching this monographic portrait, as well as augmenting the larger, cosmopolitan portrait that we know rather better by dint of those letters that crossed the Atlantic eastwards. As a professional geographer, he helps the reader with the (many) scientific terms required for a close understanding of Bonpland's experiments, and his department at UCLA has provided us with a ne map through which to trace the peregrinations of four decades. The book is densely populated with learned footnotes (wherein one can almost follow a subsidiary story as well as the comprehensive references)."

"This well-researched, insightful book is recommended to students and professionals in Latin American history and political science."

"Bell's book is both the best and the most complete study ever written on this key figure in South American science and exploration. Bell should be congratulated for having put together a veritable jigsaw of materials on an important topic and having done so in a readable, well-focused way." 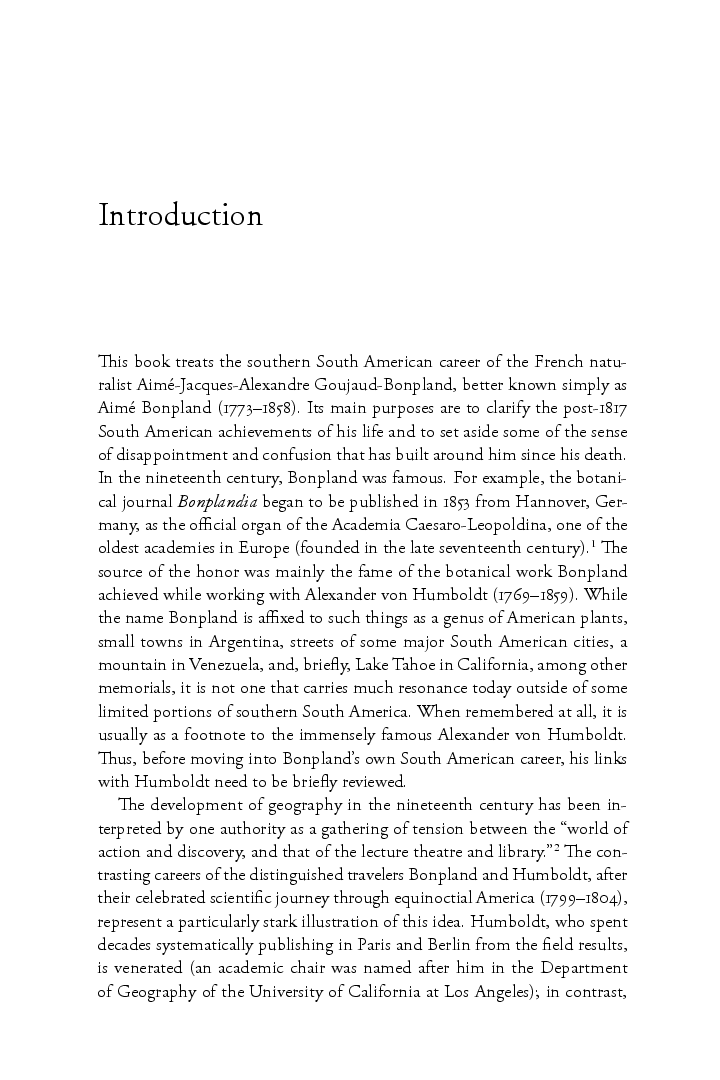 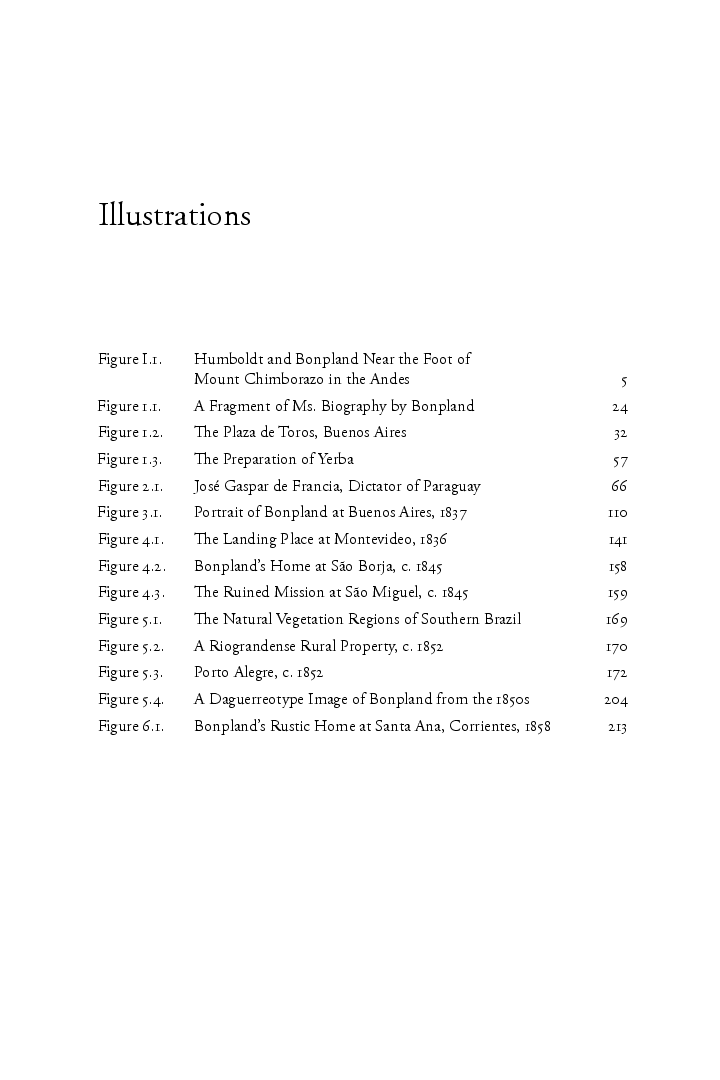 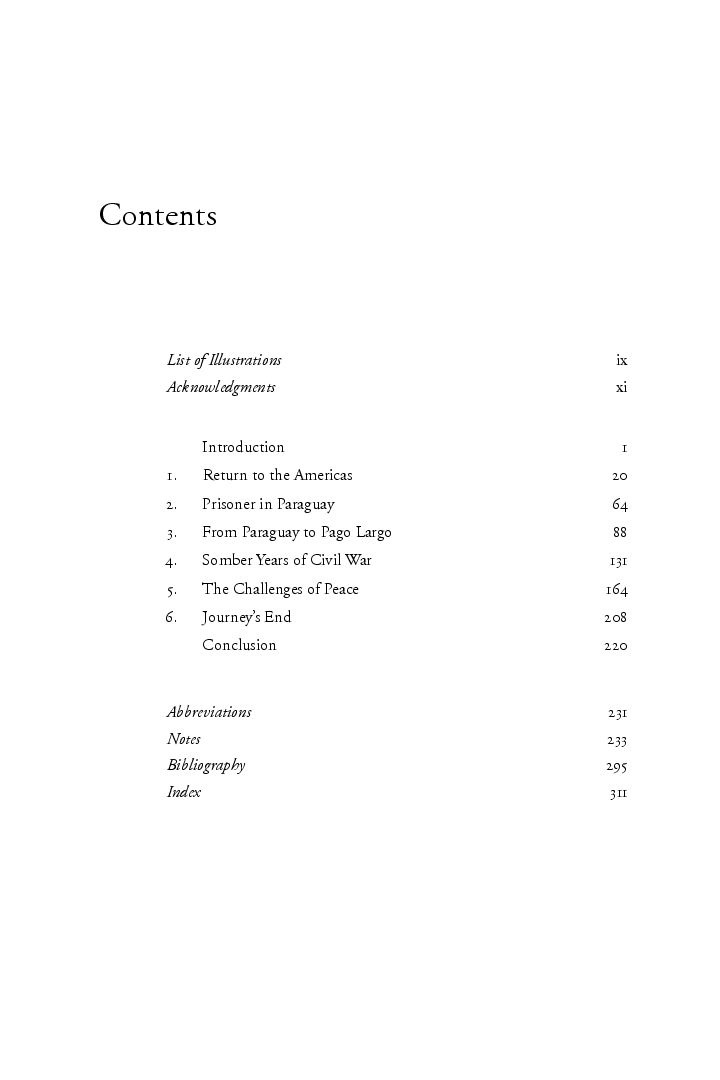