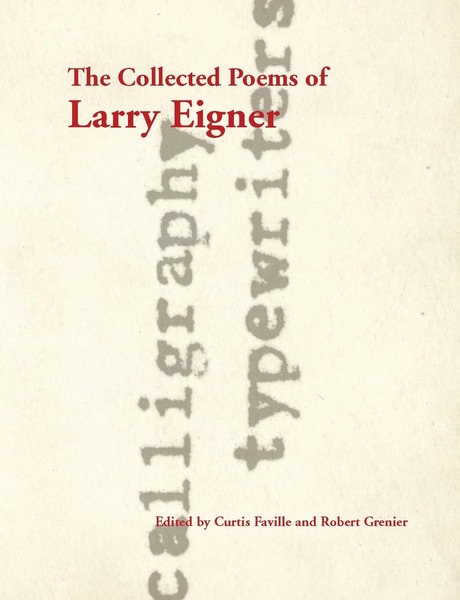 The Collected Poems of Larry Eigner brings together, for the first time, all of the approximately 3,072 published and unpublished poems composed by Larry Eigner (1927-1996), a prominent American poet of the second half of the twentieth century and one of the principal figures of the influential Black Mountain School. Scrupulously edited by Robert Grenier and Curtis Faville from the extensive archives of Eigner typescripts at the University of Kansas and Stanford University, this monumental, four-volume, 8 1/2 by 11 inch edition sets forth in chronological sequence the story of Eigner's achievement, from his modest beginnings as the boy-author of traditional rhymes to his highly original (and often profoundly moving) constructions made of letters in the space of his typewriter page, which have gained him widespread recognition and placed him in the forefront of the literary avant-garde.

For over 40 years, beginning in the early 1950's, Larry Eigner's writing was a wonder and a delight to readers of contemporary poetry, appearing in countless little magazines and in over 75 books and pamphlets. With the publication of The Collected Poems—faithfully reproducing the precise visual and aural relationships envisioned by the author in an equivalently spaced Courier computer font which preserves typewriter spacing—the fact of Eigner's amazing accomplishment can finally be known, appreciated and appraised by a much-better-informed, wider audience.

Palsied from hard birth, growing up in a close-knit, nurturing household in Swampscott, Massachusetts, Eigner courageously overcame a series of physical obstacles and limitations to achieve a mastery over the material text, producing his typescripts on his 1940 Royal manual typewriter using only his right index finger and thumb to create shifting constellations of words in space whose musical and visual designs are realized in a language at once immediate and highly abstract.

Perhaps the best realization to date of the idea of "composition by field" proposed by Charles Olson in his landmark essay "Projective Verse," The Collected Poems of Larry Eigner is a literary event of the first order.

Poet, essayist and drawing poem text artist Robert Grenier, a leading figure in the Language Writing movement, attended Harvard College and the Iowa Writers' Workshop and has taught literature and creative writing at U.C. Berkeley, Tufts, Franconia College, New College of California and Mills College. He has held an Amy Lowell Travelling Scholarship and two NEA Fellowships in Creative Writing. Working together with the author, Grenier previously edited three books of poems by Larry Eigner: Waters/Places/A Time, Windows/Walls/Yard/Ways and readiness/enough/depends/on. From 1979 to 1989, as part of a shared living arrangement in Berkeley, Robert Grenier and Kathleen Frumkin provided for Eigner's daily needs (including him in their family), and Grenier (working with Eigner) completed the preparation of some 1,800 'established texts' of Larry Eigner's poems, in contemplation of the future occasion of a Collected Poems. An archive of Grenier's work over the years, the Robert Grenier Papers, is housed in Stanford University's Green Library.

Curtis Faville has worked as a teacher, editor, publisher, bureaucrat and—since 1998—rare book dealer. He holds degrees in English, creative writing, and landscape architecture. He has published four collections of poetry—Stanzas For An Evening Out, Ready, Wittgenstein's Door, and Metro—and published books by Bill Berkson, Ted Greenwald, and Larry Eigner, among others, under the L Publications/Compass Rose Books imprimatur. He lives with his wife in Kensington, California.

"There is no 20th century American poet more present, more pertinent, more necessary than Larry Eigner. The editorial focus in this definitive collection is to present Eigner's work in a manner that rigorously adheres to the author's typewritten manuscripts as the best guide to the visual shape of each poem. As a result, this astonishing edition is the first full-scale publication of Eigner's serial poetry that gives a comprehensive experience of both the epic scale and meticulously intricate details of his aesthetic vision. Grenier and Faville have done a heroic job assembling the poems of an American hero, whose splendor shines through each and every one of these pages and whose spirit lingers in the spaces between the words."

"Larry Eigner's oceanic body of work is composed almost entirely of discrete particulars, available to the senses in ordinary time. By means of an insistent, restless movement, quick shifts of attention again and again record the harvest of the moment, the manifest, contingent phenomena of temporal existence. A cosmic ecology in fractal, the truth of the mortality of the subject is thus built into the apperception of the world at large. "By going around enough it may be perfect." What more could you ask?"

"Because his physical vocabulary was so finite, Larry Eigner took nothing for granted. Discovering the poem, Eigner took responsibility for every element that showed up on the page, attaining a thoroughness of control unmatched in the history of English. These stripped down works have a sculptural—one wants to say "architectural"—logic that can escape a casual reader. But once you open yourself up to these poems, you will discover yourself entering one of the great kingdoms of the imagination."

"Larry Eigner was the first poet to realize the syntactic potential of the page, creating a new kind of grammar out of the spatial arrangement of words. Other poets relied on conventional grammar to maintain coherence as their words spread out on the page. Eigner wanted coherence to be discovered as well as maintained, and he found a form for that desire in scatter. But Eigner's gift only begins in formal innovation. Where it takes him is out, into the world, perception by perception, word by word, one keystroke at a time. Imagination creating the universe it inhabits, feelingly. The result: more than three thousand poems, a lifetime's record of perception and discovery, now assembled for the first time thanks to Robert Grenier and Curtis Faville. A beautiful, sensation-rich body of work, Eigner's poetry will arouse your delight, and wonder, and puzzlement, and understanding. An unforgettable experience of language."

"Larry Eigner lived intensely in the world and in language, lived in the material, sensual world intensely through the sensual materiality of language. His poems, at once concisely focused on the immediate moment yet wide open to its implications, score the movement of those acts of perception— what he saw and heard and thought and felt—through the cuts and turns of lineation, the flow and pause of spatial arrangement. It is a remarkable body of work, and this edition, meticulously edited by Robert Grenier and Curtis Faville, is an extraordinary achievement that presents all of Eigner's poems exactly as he graphed them on his typewriter."

Here, in this magnificent 4-volume edition, lies Larry Eigner's life—a life lived physically in these words. With his right index finger and thumb pressing the keys of his old Royal manual typewriter ("stone-cutting all the way" as Olson put it) to 'make' each letter, each word, each line of each poem, Eigner's 'invention' of space on the two-dimensional page registers a world of perception and thought that is a gift to lovers of American poetry—'itself'/'alone' yet (mysteriously) 'shared'/'public' (like Emily Dickinson's)—helping us to define (in words), and see, and therefore know what's going on. Enormous thanks to Grenier and Faville for giving us this definitive edition of this major American poet's life's work. –Stephen Ratcliffe

"There are two labors to be celebrated with the publication of The Collected Poems of Larry Eigner—or three, if one includes (as I think one should) the publication itself, so generously undertaken by Stanford University Press. But underlying this publication are the prodigious labors of its editors, whose many years of archival research and textual interpretation, and whose powerful understanding of Larry Eigner's conceptual and material intentions, have produced this meticulous edition of his poems, as true to them as technology can effect. And of course the original labors are Eigner's own—labors of articulation and experience. This Collected Poems testifies to the assiduousness of his work, evidenced not only in the sheer number of poems he wrote and the number of years that he dedicated to that writing, but in the persistence of his perceptual labors—to see truly, to see presently, to see not only things but time, and space, and the interrelations for whose sake perception struggles. In Eigner's poems it struggles through to that which is: "oooh//the twigs.""

"For readers and poets alike, Larry Eigner's poems are without parallel in my own experience. I have never read anything so particular to the edge of one's own physical body and the surrounding "world" in which it lives. Nor have I often met with such lively intellect and such mastery of poetry's resources. I find him still as impressive and wondrous as I did those fifty years ago. I was his first publisher, as it happens, and I recall the great excitement and approval given that first collection, From the Sustaining Air, by W.C. Williams. The fact that he had to deal with cerebral palsy as a poet means that his engagement with and proposal of the given world has always that factor present. Paradoxically, his physical state proves not a limit of his powers as a poet but, rather, an unexpected sponsor of its exceptional intellectual and perceptual authority. For me the importance of his work is absolute—as would be Robert Duncan's, or John Ashbery's, or Denise Levertov's, or Allen Ginsberg's."

"The name LARRY EIGNER should be written and read large in the minds of all who care about American poetry post-William Carlos Williams, post-Charles Olson."