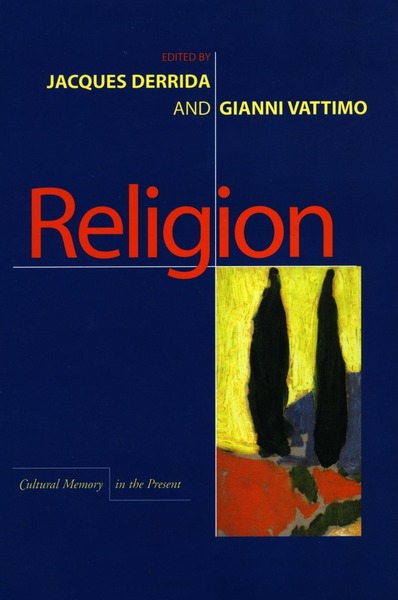 Religion
Edited by Jacques Derrida and Gianni Vattimo Translated by David Webb and Others
SERIES: Cultural Memory in the Present

What should we make of the return to the sacred evidenced by the new vitality of churches, sects, and religious beliefs in many parts of the world today? What are the boundaries between the essential traits of religion and those of ethics and justice? Is there a "truth" to religion? This remarkable volume includes reflections on such questions by three of the most important philosophers of our time—Jacques Derrida, Gianni Vattimo, and Hans-Georg Gadamer. Together with other distinguished thinkers, they address a wide range of questions about the meaning, status, and future prospects of religion.

In his meditation on the "return of religion," entitled "Faith and Knowledge: The Two Sources of 'Religion' at the Limits of Mere Reason," Derrida addresses the ways in which this return is intrinsically linked to transformations of which the new media are both the carriers and the symptom. Derrida coins this process one of globalatinization. This neologism signals, among other things, the process of a certain universalization of the Roman word or concept of religion, which tends to become hegemonic, as well as a certain performativity discernible in the new media and in contemporary structures of testimony and confession. Examples of this include, Derrida reminds us, not only the phenomenon of televangelism and televisual stagings of the pope's journeys, and not only the portrayal and self-presentation of Islam, but also the fetishization and becoming virtually absolute of the televisual and the multimedial as such.

Using Being and Time as a point of reference, Vattimo suggests that religious experience is both an individual experience and a manifestation of a historical rhythm within which religion regularly appears and disappears. A commentary by Gadamer summarizes and enriches the contributions by Derrida and Vattimo.

Four essays by Maurizio Ferraris, Eugenio Trias, Vincenzo Vitiello, and Aldo Giorgio Gargani complete the volume by examining other facets of the "religious."