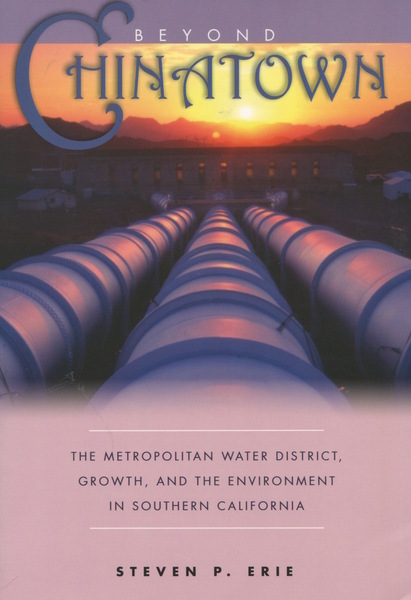 Beyond Chinatown
The Metropolitan Water District, Growth, and the Environment in Southern California
Steven P. Erie

As urban growth outstrips water supplies, how can the global challenge of providing "liquid gold" be met? Mixing history and policy analysis, Steven Erie tells the compelling story of the Metropolitan Water District of Southern California (MWD)—one of the world's largest and most important public water agencies—and its role in building the world's 8th largest economy in a semi-desert. No tawdry tale of secret backroom conspiracies—as depicted in the famed film noir Chinatown—this fresh telling concerns an unheralded regional institution, its entrepreneurial public leadership, and pioneering policymaking.

"This book is a must-read for anyone interested in the politics of Western cities, the politics of urban development, and especially the future politics of cities that are likely to be contenders in the increasingly competitive arena of global trade. . . . Erie's analysis will forever direct us to look first at certain public agencies to begin to understand larger patterns of economic growth in any metropolitan area."—Journal of Urban Affairs

"[A] fascinating history of the Los Angeles region's great assets and the forces that drove their development. . . . One hundred years ago, it was improbable that the Los Angeles region would become the 10th largest economy in the world. In Globalizing L.A., Erie explains how that happened and then, fingers crossed, offers lessons on how California's largest and most diverse city and region can keep playing a leading role."—Los Angeles Times

"Erie has built a potent political-economy of urban development that recognizes the crucial role of the public sector in mediating globalizing processes . . . and this is a valuable lesson for academics, dockworkers, community developers, and environmental activists alike."—Economic Geography

Steven P. Erie is Professor of Political Science and Director of the Urban Studies and Planning Program at the University of California, San Diego. His previous books include Globalizing L.A.: Trade, Infrastructure, and Regional Development (Stanford University Press, 2004) and Rainbow's End: Irish Americans and the Dilemmas of Urban Machine Politics (1990).

"Erie's persuasive argument that the Metropolitan Water District is one of the creative but flawed designers of Southern California is haunted by forgetfulness: We forget where our water comes from....We forget who manages it for us and why water policy is the most important political decision we never get to make....Unfortunately forgetting is what we're best at. It helps explains why we can't move beyond the myths of Chinatown without stories about Los Angeles as reasoned and convincing as Erie's."

"Water history is tough to write, and no one has done it better than Steven P. Erie in this fast-paced narrative based on monumental research. I marvel at the multi-faceted inclusiveness of this story of water, region, politics, engineering, growth, and the environment."

"Professor Erie lays out for serious students and readers alike a compelling study of the perception and reality of the MET and the major figures and events that define it. The history of real life intrigue revealed is worthy of the Chinatown title, but there is much more here for today's leaders seeking to find a model of success for regional cooperation and accomplishment."

"In this sweeping history, Erie gives us not only the people, plans, and decisions of a public agency that has allowed a semi-arid region to take water for granted, but also the consequences of those decisions that have assisted in the creation of one of the world's great economies. And then, like a scout at the horizon, he confronts the global challenges facing the future of water for this region—indeed, the future of California. Beyond Chinatown indeed. It's a great read and an important book."

"This revisionist history of the Metropolitan Water District transforms its long accepted "black hat" to pale gray. Steve Erie solidifies his reputation as the contemporary authority on Southern California water politics with this highly engaging book. It is a must read for everyone interested in water policy. "

"This is an extremely important work. . . . 'State of the art' in terms of its research and findings on one of the most important water agencies in the nation."

"This is a first-rate study. It is valuable both for the important story it tells and for the broader lessons it suggests on the role of government in urban development and on the importance of entrepreneurial leadership in meeting complex public needs."

"Steve Erie knocks another one out of the ballpark. Having written a superb book on machine politics in Rainbows End, and having brought the state back into urban politics in compelling fashion in Globalizing L.A., Erie does path-breaking work once again in his analysis of water politics in Beyond Chinatown showing us the importance of regionalization and how to study it. The second of a trilogy on infrastructure in southern California, Erie's new book is another fascinating saga in how the west was developed. "

:"Beyond Chinatown is a valuable blend of economic history, policy analysis, and political science about a huge governmental institution charged with bringing water to the part of the country that best typifies the American economy and society in the latter half of the twentieth and early twenty-first centuries -- Los Angeles and Southern California."

"Beyond Chinatown should be required reading for anyone concerned with how successful the agency that provides water to so many clients has been, and whether MWD can sustain that success in meeting the challenges of the future."

"Beyond Chinatown's merger of history and policy study, set against debunked myth, should serve as a major reorientation for teaching, researching, and planning, not only in Southern California, but in metropolitan regions throughout the world." 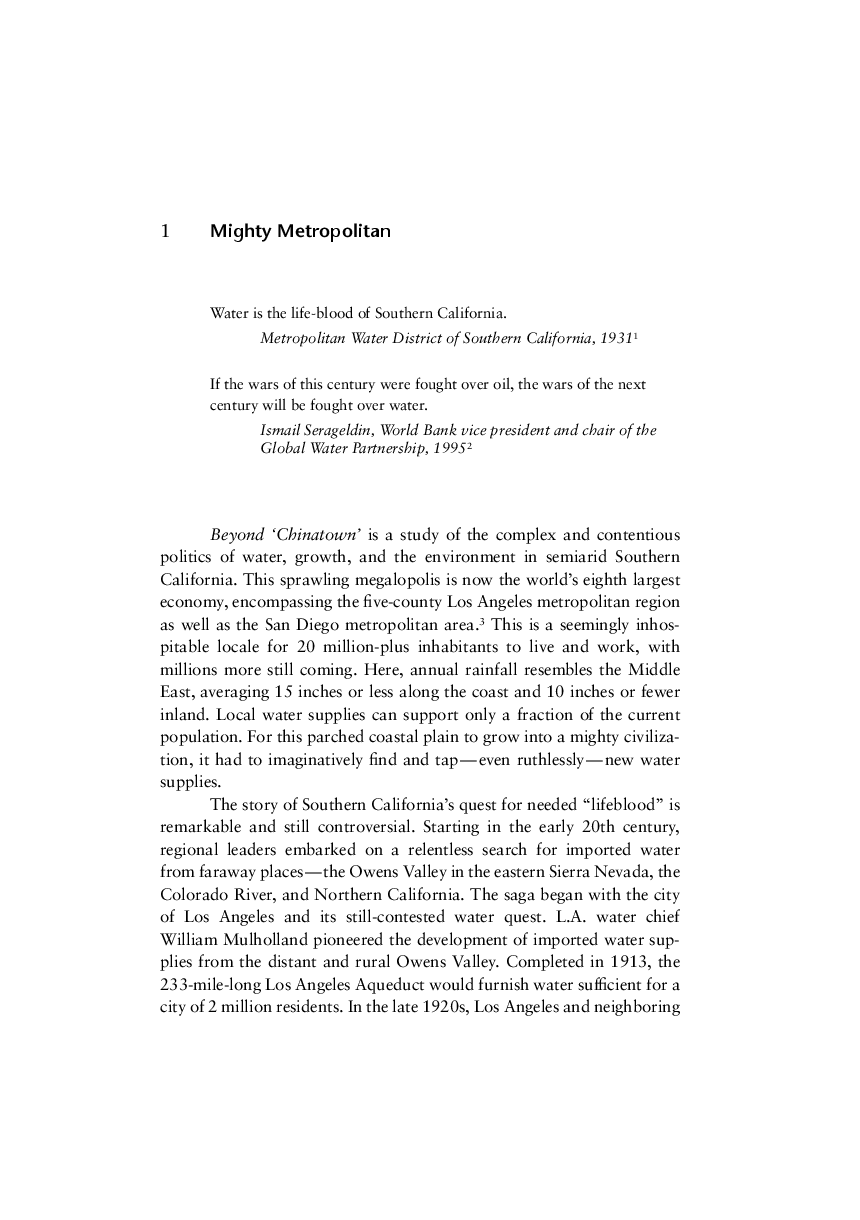 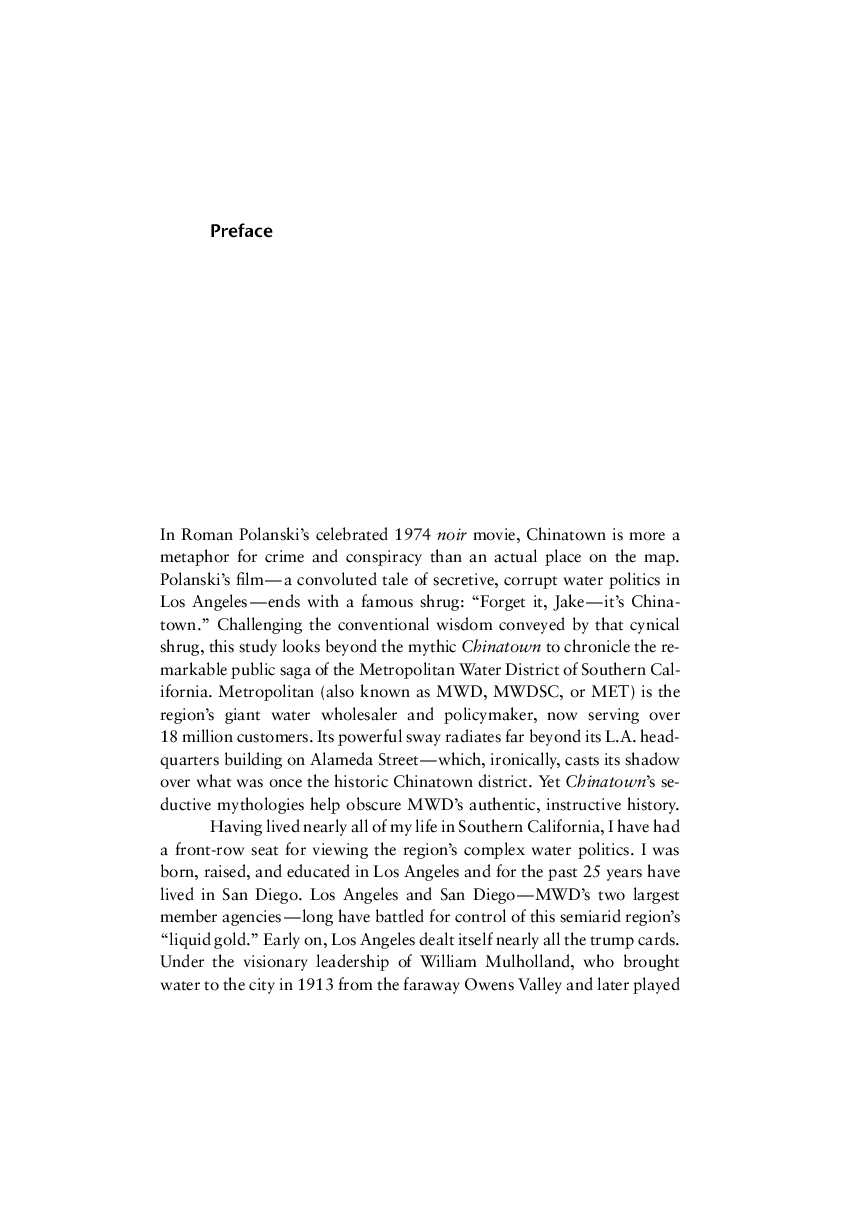 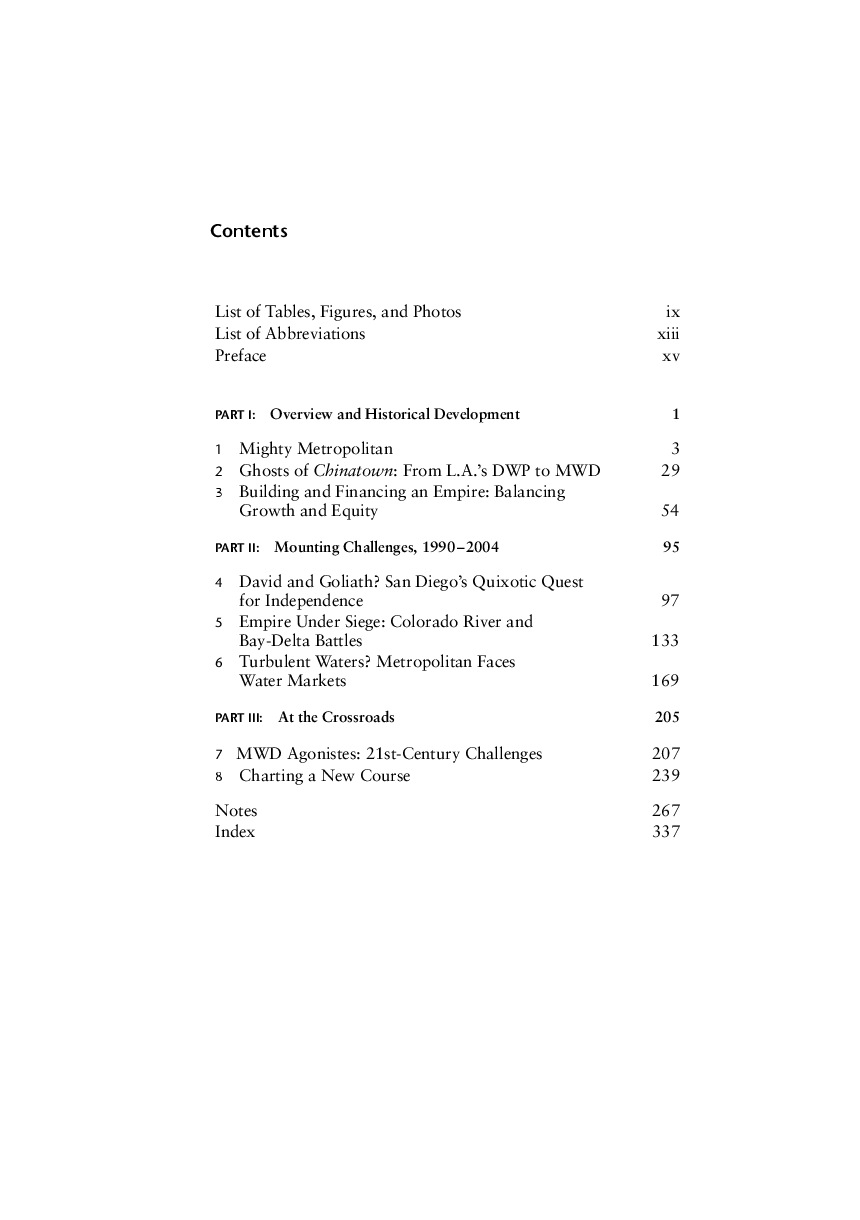