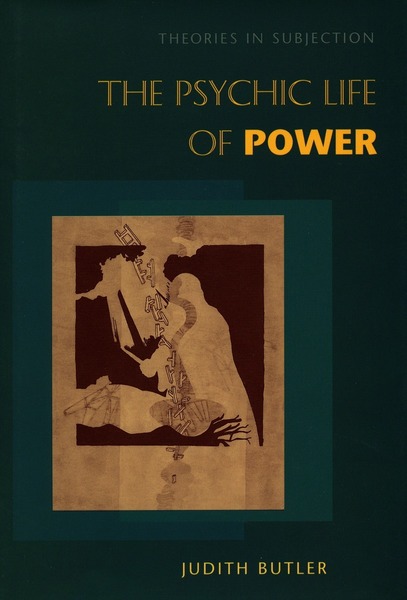 The Psychic Life of Power
Theories in Subjection
Judith Butler

As a form of power, subjection is paradoxical. To be dominated by a power external to oneself is a familiar and agonizing form power takes. To find, however, that what "one" is, one's very formation as a subject, is dependent upon that very power is quite another. If, following Foucault, we understand power as forming the subject as well, it provides the very condition of its existence and the trajectory of its desire. Power is not simply what we depend on for our existence but that which forms reflexivity as well. Drawing upon Hegel, Nietzsche, Freud, Foucault, and Althusser, this challenging and lucid work offers a theory of subject formation that illuminates as ambivalent the psychic effects of social power.

If we take Hegel and Nietzsche seriously, then the "inner life" of consciousness and, indeed, of conscience, not only is fabricated by power, but becomes one of the ways in which power is anchored in subjectivity. The author considers the way in which psychic life is generated by the social operation of power, and how that social operation of power is concealed and fortified by the psyche that it produces. Power is no longer understood to be "internalized" by an existing subject, but the subject is spawned as an ambivalent effect of power, one that is staged through the operation of conscience.

To claim that power fabricates the psyche is also to claim that there is a fictional and fabricated quality to the psyche. The figure of a psyche that "turns against itself" is crucial to this study, and offers an alternative to describing power as "internalized." Although most readers of Foucault eschew psychoanalytic theory, and most thinkers of the psyche eschew Foucault, the author seeks to theorize this ambivalent relation between the social and the psychic as one of the most dynamic and difficult effects of power.

This work combines social theory, philosophy, and psychoanalysis in novel ways, offering a more sustained analysis of the theory of subject formation implicit in such other works of the author as Bodies That Matter: On the Discursive Limits of "Sex" and Gender Trouble: Feminism and the Subversion of Identity.

"The emergence of self-consciousness is rooted in paradox—for becoming a subject is intricately bound up with being subjected. This insight . . . is explored and developed as [Butler's] book unfolds, taking the reader through a tour de force of its rhetorical, linguistic, philosophical, psychoanalytic, and social and political implications."