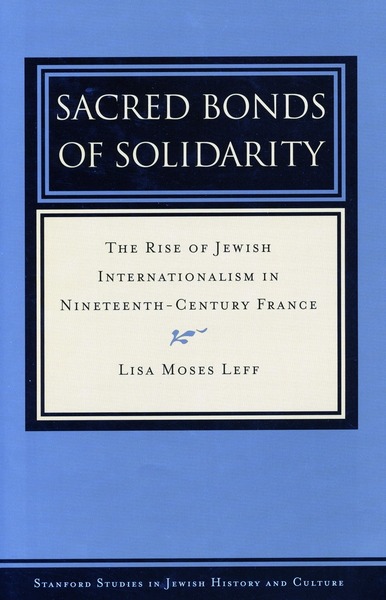 Starting around 1840, French Jews began to reach out in new ways to Jews elsewhere, especially in North Africa and the Middle East. In describing these activities, they spoke of feelings of solidarité and a mission to bring civilisation to Jews everywhere, a language more meaningful in the French public arena than in Jewish tradition. Far from a remnant of ancient feelings, Jewish solidarity is a modern phenomenon with roots in its inventors' integration into French political culture. Why did acculturation inspire elite French Jews to affirm their Jewishness through international aid? What did their actions mean in the French public sphere, and how did they transform Jewish identity?

In a book that speaks to French historians and Jewish historians alike, Sacred Bonds of Solidarity explores the historical roots of Jewish international aid and the language of "solidarity" that accompanied it. In using this language, French Jews redefined Jewish identity in lasting ways. At the same time, they helped shape state secularism and the "civilizing mission" in French foreign and colonial policy.

"In her path-breaking book... Lisa Moses Leff shows that what seems natural today—international Jewish solidarity—emerged out of very specic nineteenth-century circumstances, especially in France... Sacred Bonds of Solidarity is extremely well written and meticulously researched... This story is therefore of interest both to specialists in Jewish history and to French historians more generally."

"Leff's analysis rings true and her book has certainly provided a valuable service by elucidating several aspects of both French and Jewish history in the nineteenth century, showing, among other things, that the progress of Jewish emancipation and integration had an important international component, and helping reveal the roots of modern-day Jewish feelings of interconnectedness."

"This is an exciting and unique contribution to the history of Jewish internationalism. In contrast to an earlier generation of scholars, Leff shows quite convincingly that French Jews did not abandon their Jewishness in order to become integrated French citizens. Rather, they re-conceptualized their Jewishness to reflect the new political and social realities they faced."

"This is the story Lisa Moses Leff has to tell, a story of emancipation and religious fellow feeling, and she tells it with lucidity and a deep sympathy for her subject matter...She has recounted a tale of hope and optimism, of a community energized by the prospect of its own emancipation and mobilized to make its contribution to a France itself in the process of transformation."

"By integrating treatises and works of fiction into her research, Leff successfully illustrates the cause and effect element in the Jewish quest for a political and social role in nineteenth-century France as well as the international stage."