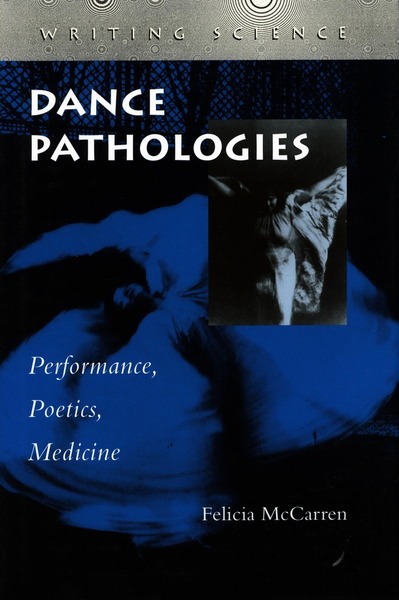 A history of dance’s pathologization may startle readers who find in dance performance grace, discipline, geometry, poetry, and the body’s transcendence of itself. Exploring dance’s historical links to the medical and scientific connotations of a “pathology,” this book asks what has subtended the idealization of dance in the West. It investigates the nineteenth-century response, in the intersections of dance, literature, and medicine, to the complex and long-standing connections between illness, madness, poetry, and performance.

In the nineteenth century, medicine becomes a major cultural index to measure the body’s meanings. As a particularly performative form of madness, nineteenth-century hysteria preserved the traditional connection to dance in medical descriptions of “choreas.” In its withholding of speech and its use of body code, dance, like hysteria, functions as a form of symptomatic expression.

Yet by working like a symptom, dance performance can also be read as a commentary on symptomatology and as a condition of possibility for such alternative approaches to mental illness as psychoanalysis. By redeeming as art what is “lost” in hysteria, dance expresses non-hysterically what only hysteria had been able to express: the somatic translation of idea, the physicalization of meaning.

Medicine’s discovery of “idea” manifesting itself in the body in mental illness strikingly parallels a literary fascination with the ability of nineteenth-century dance to manifest “idea,” suggesting that the evolution of medical thinking about mind-body relations as they malfunction in madness, as well as changes in the cultural reception of danced representations of these relations, might be paradigmatic shifts caused by the same cultural factors: concern about the body as a site of meaning and about vision as a theater of knowledge.

Felicia McCarren is Assistant Professor of French at Tulane University.

“This book harvests the fruits of a decade of critical rethinking about Freud and Lacan and historical research into the history of medicine to rewrite the history of dance in literature, as literature, and against literature. In that way it is without rivals.”—Joseph Roach, Yale University