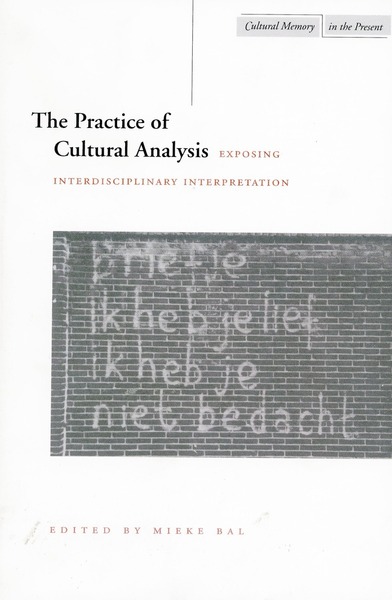 This volume presents an interdisciplinary approach to humanistic scholarship, one that can be situated somewhere between cultural studies and cultural history while being more specific than either. Cultural analysis as a critical practice is based on a keen awareness of the critic's situatedness in the present—the social and cultural present from which we look, and look back, at objects that are already of the past, objects that we take to define our present culture. Thus it can be summarized by the phrase "cultural memory in the present." Far from being indifferent to history, cultural analysis is devoted to understanding the past as part of the present, as what we have around us.

The essays gathered here represent the current state of an emerging field of inquiry. At the same time, they suggest to the larger academic world what cultural analysis can and should do, or be, as an interdisciplinary practice. The challenge for this volume is to counter the common assumption that interdisciplinarity makes the object of inquiry vague and the methodology muddled. In meeting that challenge, it offers close textual and visual readings of subjects ranging from Vermeer to abstract expressionism, from the Book of Ruth to Djuna Barnes's Nightwood, from the history of cinema to popular culture in Zaire.

The essays in Part I, "Don't Look Now: Visual Memory in the Present," explore in detailed case studies centered on the theme of visuality or looking, the tricky consequences of the uncertainties regarding history that the presentness of the past entails. Part II, "Close-ups and Mirrors: The Return of Close Reading, with a Difference," demonstrates and advocates "listening" to the object without the New Critical naïveté that claims the text speaks for itself. Instead, the essays create the kind of dialogical situation that is a major characteristic of cultural analysis; the text does not speak for itself, but it does speak back. The essays in Part III, "Method Matters: Reflections on the Identity of Cultural Analysis," do not propose any "directions for use" or authoritative statements on how to do cultural analysis. Arranged in pairs of opposites, the essays represent the kind of fruitful tension that stimulates debate. Though no definite answers are proposed, and conflicting views are left in conflict, the essays stimulate a (self-)reflection on cultural analysis, its practices, and its understandings.

Mieke Bal is Professor of Literary Theory at the University of Amsterdam and co-founder of the Amsterdam School for Cultural Analysis, Theory, and Interpretation. The most recent of her many books is The Mottled Screen: Reading Proust Visually (Stanford, 1997).