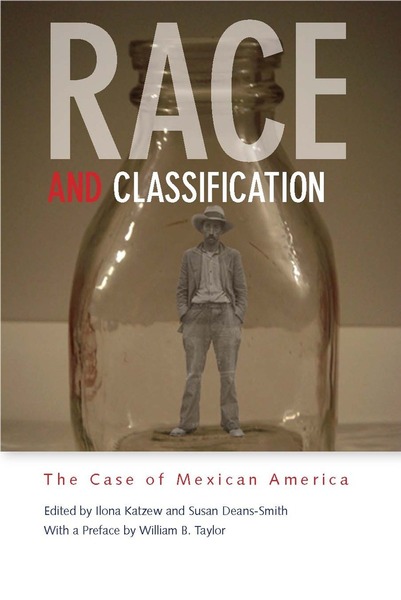 Race and Classification
The Case of Mexican America
Edited by Ilona Katzew and Susan Deans-Smith With a Preface by William B. Taylor

This innovative and provocative volume focuses on the historical development of racial thinking and imagining in Mexico and the southwestern United States over a period of almost five centuries, from the earliest decades of Spanish colonial rule and the birth of a multiracial colonial population, to the present. The distinguished contributors to the volume bring into dialogue sophisticated new scholarship from an impressive range of disciplines, including social and cultural history, art history, legal studies, and performance art. The essays provide an engaging and original framework for understanding the development of racial thinking and classification in the region that was once New Spain and also shed new light on the history of the shifting ties between Mexico and the United States and the transnational condition of Latinos in the US today.

Ilona Katzew is Curator of Latin American Art at the Los Angeles County Museum of Art. Her books include New World Orders (1996), which received the prestigious Henry Allen Moe Prize, and Una visión del México del Siglo de las Luces (2006). Susan Deans-Smith is Associate Professor of History in the Department of History at the University of Texas at Austin. She is the author of Bureaucrats, Planters and Workers: the Making of the Tobacco Monopoly in Bourbon Mexico (1992)

"The wide range if topics found in this collection—including a highly readable discussion of Chicano film by Adriana Katzew and an interview with the photographer and performance artist Guillermo Gomez-Pena—engages the reader, as every chapter addresses a new subject with a distinct, invigorating, analytical approach."

"This engaging collection offers some of the best recent scholarship on race and ethnicity in Mexico and Mexican America . . . [T]his volume is extremely relevant as the present political and social debates over race and classification in the Unites States and Mexico intensify."

"I think this book will be highly valued by scholars and students of Mexico and of race in Latin America. Its historical depth and interdisciplinary, transnational approach make it a significant contribution."

"Ilona Katzew and Susan Deans-Smith have put together a very impressive collection of essays tightly focused around the endlessly interesting question of race and classification, all the more valuable for a chronological and geographical scope unmatched by any other volume."

"This useful and enlightening book covers an historical and geographic arc that can only be covered in an edited volume. The combination of original essays on race and caste in the colonial period and the Mexican experience in the US is unique, as is the dialogue between visually oriented essays and social-historical analysis. Race and Classification is at once an original contribution to the field and a careful synthesis of a widely dispersed literature."