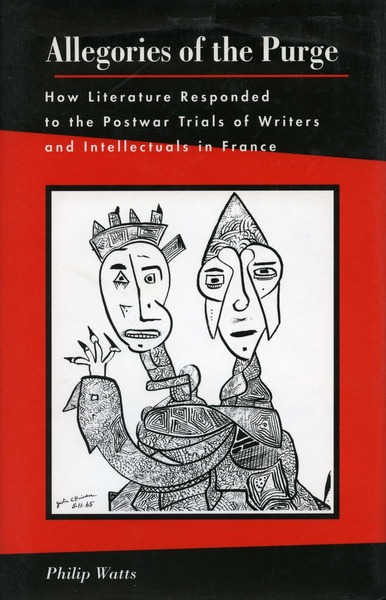 Winner of the 2000 Aldo and Jeanne Scaglione Prize for French and Francophone Studies, sponsored by the Modern Language Association of America.

This book is about four writers—Sartre, Eluard, Blanchot, and Céline—whose works confront and respond to the purge of collaborationist intellectuals in postwar France. It investigates how their writing argues for or against the different positions outlined during the purge and how it reflects or distorts the competing theories about literature to emerge from the trials.

These writers were themselves involved in the trials to varying degrees: Céline was accused of treason, though eventually condemned on a lesser charge; Eluard, one of the leading Resistance poets and a Communist, published in the clandestine Resistance press and devoted a number of his poems to condemning collaborators; Sartre’s theory of committed literature reiterates the theme of the writer’s responsibility as presented during the trials; as for Blanchot, if his work never directly comments upon the purge, its arguments for the autonomy of literature are both a response to Sartre and a commentary on what Blanchot called the “trial of art.”

In their reactions to the purge, these writers mobilized a number of discourses, ranging from the historical, economic, and literary to the sexual, medical, and corporeal. To understand their views on the trials, it is useful to read their texts as allegories of the purge. At one point or another they all speak about the purge through a series of metaphoric substitutions maintained through an extended narrative—whether this narrative is a critical essay, a novel, or a collection of poems. The texts also give the reader a code for reading them allegorically, and this code is the purge archive, whose records, debates, and arguments reshaped the way writers understood their craft.

Philip Watts is Assistant Professor of French at the University of Pittsburgh.

"Four authors—Jean-Paul Sartre, Paul Eluard, Maurice Blanchot, and Louis-Ferdinand Celine—whose works confront and respond to the purge of collaborationist intellectuals in postwar France are the subjects of this volume. . . . To understand their views on the trials, it is useful to read their texts as allegories of the purge. . . . The book won the Modern Language Association of America's 2000 Aldo and Jeanne Scaglione Prize for the best book in French and Francophone Literary Studies."

"[Watts's] arguments are original, he takes risks, and the stakes are significant."