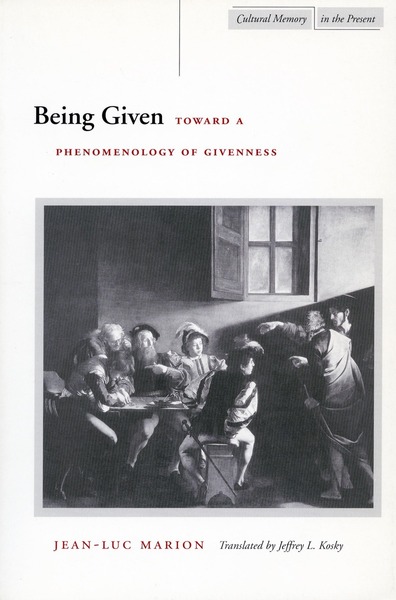 Being Given
Toward a Phenomenology of Givenness
Jean-Luc Marion Translated by Jeffrey L. Kosky
SERIES: Cultural Memory in the Present

Along with Husserl's Ideas and Heidegger's Being and Time, Being Given is one of the classic works of phenomenology in the twentieth century. Through readings of Kant, Husserl, Heidegger, Derrida, and twentieth-century French phenomenology (e.g., Merleau-Ponty, Levinas, and Henry), it ventures a bold and decisive reappraisal of phenomenology and its possibilities. Its author's most original work to date, the book pushes phenomenology to its limits in an attempt to redefine and recover the phenomenological ideal, which the author argues has never been realized in any of the historical phenomenologies. Against Husserl's reduction to consciousness and Heidegger's reduction to Dasein, the author proposes a third reduction to givenness, wherein phenomena appear unconditionally and show themselves from themselves at their own initiative.

Being Given is the clearest, most systematic response to questions that have occupied its author for the better part of two decades. The book articulates a powerful set of concepts that should provoke new research in philosophy, religion, and art, as well as at the intersection of these disciplines.

Some of the significant issues it treats include the phenomenological definition of the phenomenon, the redefinition of the gift in terms not of economy but of givenness, the nature of saturated phenomena, and the question "Who comes after the subject?" Throughout his consideration of these issues, the author carefully notes their significance for the increasingly popular fields of religious studies and philosophy of religion. Being Given is therefore indispensable reading for anyone interested in the question of the relation between the phenomenological and the theological in Marion and emergent French phenomenology.

Jean-Luc Marion is Professor of Philosophy at the University of Paris, Sorbonne. He has also taught and lectured for more than fifteen years at various universities in the United States, notably at the University of Chicago. Among his books published in English translation are God Without Being and Reduction and Givenness: Investigations of Husserl, Heidegger, and Phenomenology.

"Jean-Luc Marion has established himself as the leading phenomenologist of the day. The appearance of Being Given, the English translation of what is in my view the most important philosophical work of this important thinker, marks a milestone in the reception of Marion's work in English. A brilliant, complex and meticulous analysis of the whole range of phenomena surrounding giving, givenness, and the gift, culminating in the saturated phenomenon as the 'given par excellence,' Being Given, which was ten years in the making, will be the standard work in this field for an entire generation. Kosky's translation is superb. Altogether, a major publishing event."

"Audacious and rigorous, Being Given is a signal contribution to modern thought. For Marion, phenomenology is concerned not with objects or even being but with givenness. Having clarified what phenomenology does, Marion brilliantly shows how it exceeds metaphysics and how it requires us to rethink the human subject in the most radical manner. At no time are we asked to call on revelation, yet every page of this luminous book has rich and inescapable implications for theology as well as philosophy."

"Being Given is . . . simply dazzling: it is a work of tremendous depth and highly original thought. . . . It's amazing how much Marion . . . has changed the landscape of phenomenology—or what we on this side of the Atlantic call 'continental philosophy of religion.'"

..."Marion's Being Given is a major event in contemporary phenomenology, which will be a major source of debate and inspiration for contemporary philosophy and theology."