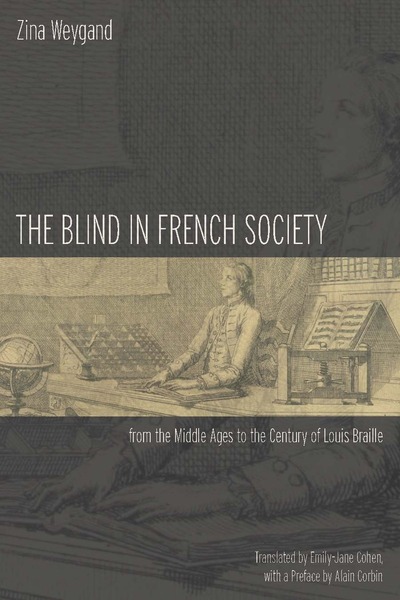 The Blind in French Society from the Middle Ages to the Century of Louis Braille
Zina Weygand Translated by Emily-Jane Cohen, with a Preface by Alain Corbin

The integration of the blind into society has always meant taking on prejudices and inaccurate representations. Weygand's highly accessible anthropological and cultural history introduces us to both real and imaginary figures from the past, uncovering French attitudes towards the blind from the Middle Ages through the first half of the nineteenth century. Much of the book, however, centers on the eighteenth century, the enlightened age of Diderot's emblematic blind man and of the Institute for Blind Youth in Paris, founded by Valentin Haüy, the great benefactor of blind people.

Weygand paints a moving picture of the blind admitted to the institutions created for them and of the conditions under which they lived, from the officially-sanctioned beggars of the medieval Quinze-Vingts to the cloth makers of the Institute for Blind Workers. She has also uncovered their fictional counterparts in an impressive array of poems, plays, and novels.The book concludes with Braille, whose invention of writing with raised dots gave blind people around the world definitive access to silent reading and to written communication.

"In this erudite, sensitive, witty, and impeccably-documented book Zina Weygand draws from the rich tradition of the French Annales school, while also offering something completely new. Thanks to her energy and creativity as a researcher, we meet scores of people who might otherwise be "victims of the vagaries of existence," from the first troupe of blind actors to the "individualist, dirty, noisy, and quarrelsome" residents of the Quinze-Vingts hospice.... Weygand's in-depth study of the reciprocal relationship between the social treatment and representations of blind people from the Middle Ages to the middle of the nineteenth century invites readers to reconsider the ocularcentric roots of modernity."

—From the foreword by Catherine Kudlick, University of California, Davis

"Until recently, historical studies of disability [...] have had difficulty finding their bearings [] Zina Weygand's work on the blind [...] is new evidence of the vitality of historical research in little known and insufficiently explored domains."

"I must first of all underscore the contribution Zina Weygand has made to the history of the longue durée that is still sorely lacking in disability studies. The history of the disabled and of disabilities is barely twenty years old. It still has almost no place in universities. It has been introduced by pioneers who have had recourse to history, in response to practices and social policies they find questionable [...]" 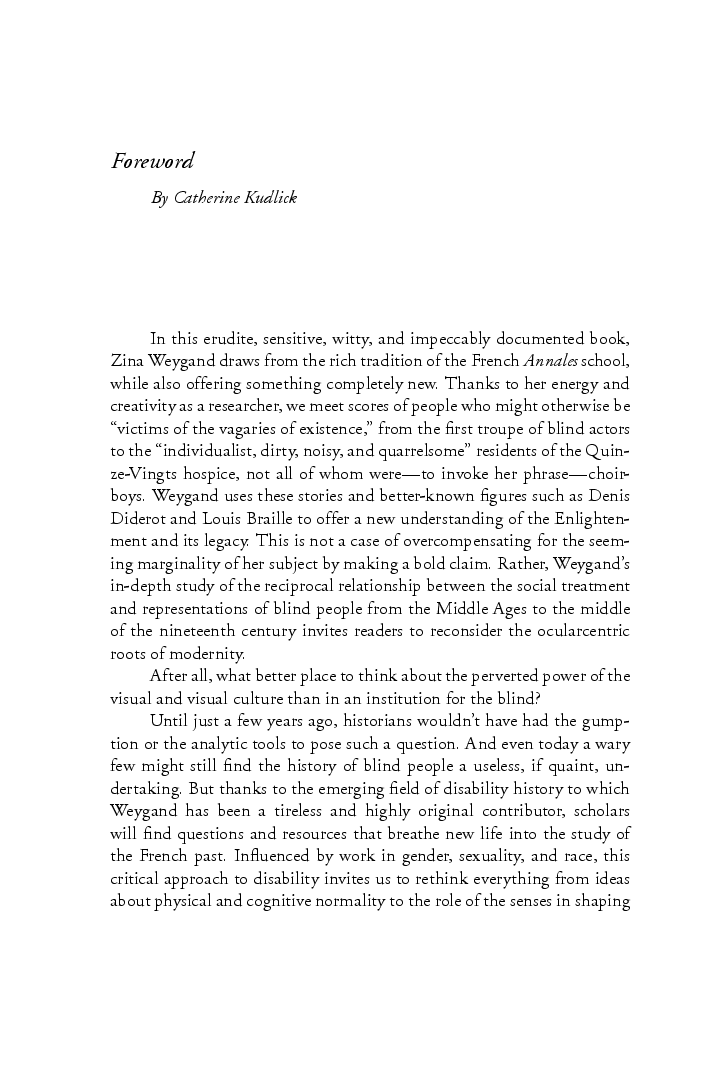 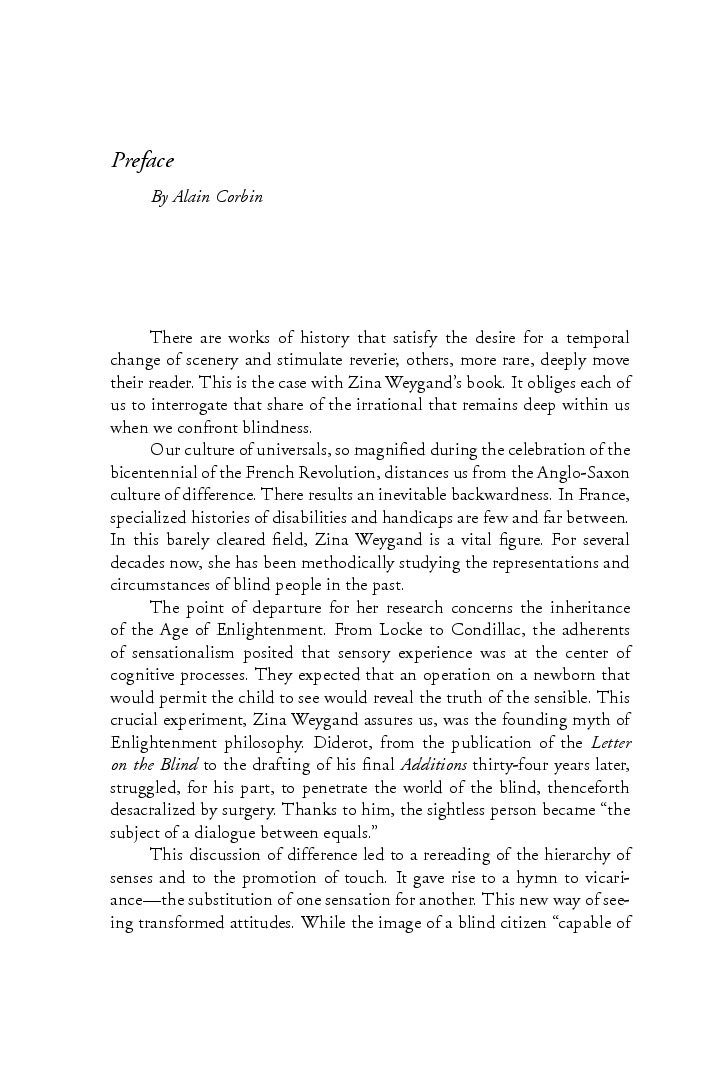 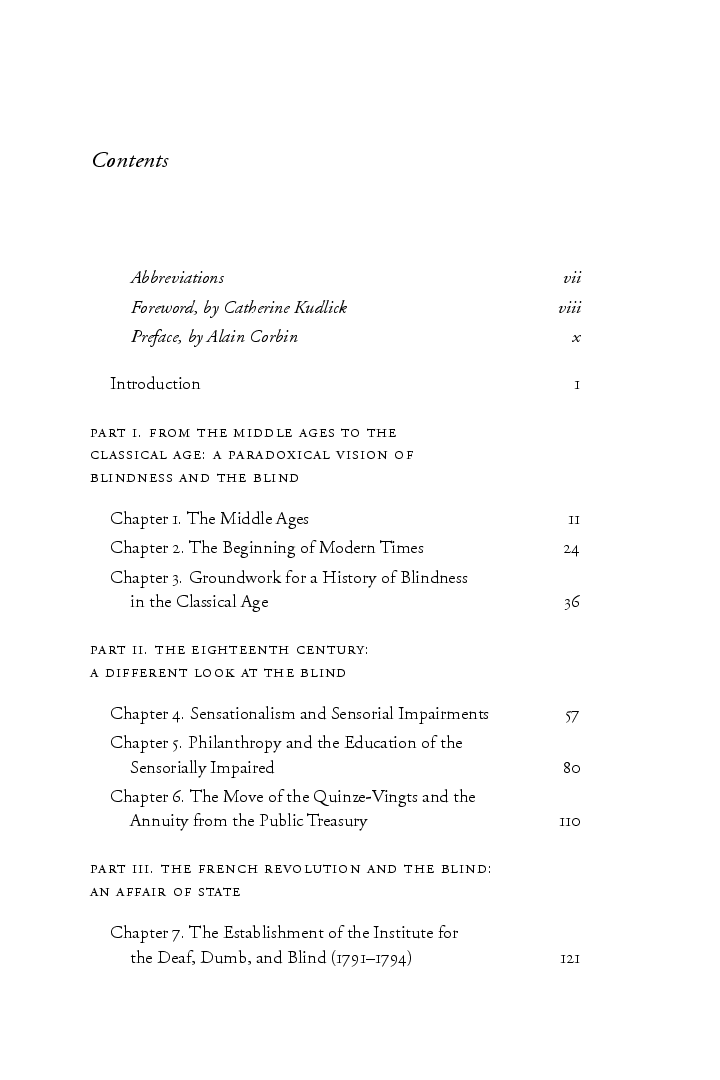