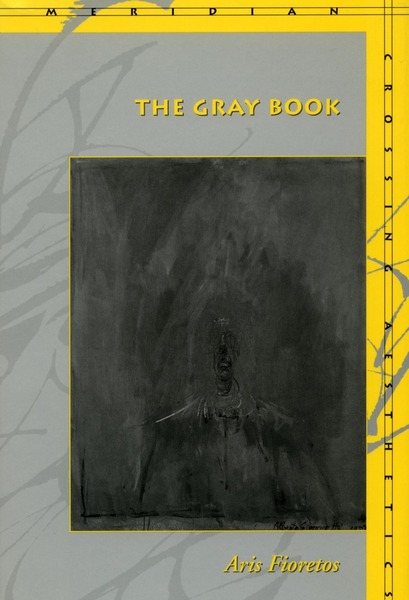 Generally considered the least lively and most bleak of casts, gray is the taint of vagueness and uncertainty. Marking the threshold region where luminous life seems suspended but death has not yet darkened the horizon, it belongs to an evasive and evanescent world, carrying the tint of smoke, fog, ashes, and dust. As the ambiguous space of thought and remembrance where things blend and blur, gray measures the difference between distance and proximity, shading into tinges of hesitation, hues of taciturnity, tones of time past and lost. Thus it may also be the spectral medium of literature itself—that grainy gas of language.

Written with a lead pencil akin to those found in Nabokov, Rilke, Svevo, Poe, and Dickinson, The Gray Book chronicles the vicissitudes of such equivocal articulation—registering the graphite traces it leaves behind but also recording the dwindling span of its life. The book situates itself in a region beyond criticism but this side of literature, characterized by forgetting and finitude, and investigating important yet seemingly inaccessible "gray areas" in texts as old as those of Homer, and as recent as those of Beckett.

Loosely arranging these literary finds according to a revision of the four elements, The Gray Book distances itself from tradition and treats not water but tears, not fire but vapor, not earth but grain, not air but clouds. The narrative thus construed, proceeding in the meandering movements of volatile thought rather than in the prudent steps of a treatise, appears gradually affected by its subject. Themes and facts previously confined to the realm of quoted texts leak into the narrative itself. The border between fiction and fact slowly dissolves as the book approaches the curious void that the author locates at the heart of "gray literature." Shaped by an omnipresent though increasingly unreliable narrator, The Gray Book may thus ultimately yield a poetics cast in the form of a ghost story.

A professor of Aesthetics at Södertörn University in Stockholm, Sweden, Aris Fioretos was educated at Stockholm and Yale Universities. The recipient of numerous prizes and fellowships, most recently from the Swedish Academy and All Souls College, Oxford, he has published several novels and book-length essays in his native Sweden and has rendered the works of Paul Auster, Friedrich Hölderlin, and Vladimir Nabokov into Swedish. His latest, award-winning novel is entitled The Last Greek (2009). Fioretos is also the general editor of the first commented edition of the complete works of Nelly Sachs in German.