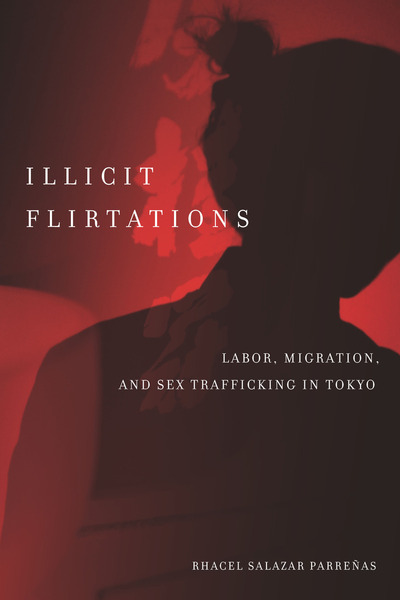 Winner of the 2012 Distinguished Scholarly Publication Award, sponsored by the ASA Labor and Labor Movements Section.

In 2004, the U.S. State Department declared Filipina hostesses in Japan the largest group of sex trafficked persons in the world. Since receiving this global attention, the number of hostesses entering Japan has dropped by nearly 90 percent—from more than 80,000 in 2004 to just over 8,000 today. To some, this might suggest a victory for the global anti-trafficking campaign, but Rhacel Parreñas counters that this drastic decline—which stripped thousands of migrants of their livelihoods—is in truth a setback.

Parreñas worked alongside hostesses in a working-class club in Tokyo's red-light district, serving drinks, singing karaoke, and entertaining her customers, including members of the yakuza, the Japanese crime syndicate. While the common assumption has been that these hostess bars are hotbeds of sexual trafficking, Parreñas quickly discovered a different world of working migrant women, there by choice, and, most importantly, where none were coerced into prostitution. But this is not to say that the hostesses were not vulnerable in other ways.

Illicit Flirtations challenges our understandings of human trafficking and calls into question the U.S. policy to broadly label these women as sex trafficked. It highlights how in imposing top-down legal constraints to solve the perceived problems—including laws that push dependence on migrant brokers, guest worker policies that bind migrants to an employer, marriage laws that limit the integration of migrants, and measures that criminalize undocumented migrants—many women become more vulnerable to exploitation, not less. It is not the jobs themselves, but the regulation that makes migrants susceptible to trafficking. If we are to end the exploitation of people, we first need to understand the actual experiences of migrants, not rest on global policy statements. This book gives a long overdue look into the real world of those labeled as trafficked.

"Illicit Flirtations is an excellent book that is well written and thoroughly researched. Parreñas untagles an incredibly complex system of migration, middlemen, and international laws to reveal the golbal implications of the US morality on international policies and migrant workers. Parreñas should be commended for making a sensitvie and cogent argument that avoids sweeping claims."

"By now, Rhacel Parreñas's depth of knowledge about the migrations of Filipinas allows her to mark distinctions, unsettle commonplace understandings, and make legible that which is shrouded. Out of this depth also comes the possibility of genuine theorizing. This is an extraordinary book whose audience will go well beyond the specialists of the subject."

—Saskia Sassen, Columbia University, author of A Sociology of Globalization

"Unflinching in its stark descriptions of day-to-day activities that transpire inside an entertainment club, the author detailed all the mundane and gritty matters of working as an entertainer in Japan . . . [T]his book contributes to the literature on Filipinos in Japan as it enriches our knowledge of what particularly goes on in the life an entertainer."

"Parrenas did an excellent job in combining field interviews with participant observation to obtain rich and reliable data from her research subjects. The result is a highly readable and informative book with firsthand accounts of the work and lives of Filipina hostesses in Tokyo. Parrennas' book is based not only on rich, empirical data, but also on theoretical framework. This book undoubtedly makes a major contribution to our understanding of the relationship between hostessing, prostitution, and sex trafficking."

—Viviana A. Zelizer, Princeton University, author of Purchase of Intimacy and Economic Lives: How Culture Shapes the Economy

"In this superb new study, Parreñas takes her rapt readers into the lives of scantily clad Filipina hostesses in Tokyo nightclubs and into the work of the professional flirter. Caught between money-gouging middlemen, club owners, and anti-trafficking laws, these women live in a labile moral world. They mix business, body, and heart in complex ways, each making peace with her own mix in her own way. A brilliant work, a must-read."

—Arlie Hochschild, author of Commercialization of Intimate Life: Notes from Home and Work

"Illicit Flirtations brings together riveting ethnography, conceptual innovation, and significant policy implications. Parreñas breathes new life into gender and labor migration scholarship with an analytic focus on sexuality, morality, and money to challenge simplistic notions of trafficked victims. This book prompts us to rethink what we thought we knew about citizenship, intimacy, and work in transnational contexts."

—Pierrette Hondagneu-Sotelo, University of Southern California, author of Doméstica: Immigrant Workers Cleaning and Caring in the Shadows of Affluence

"This book is a triumph from a leading scholar of migrant-female labor. In this work of daring ethnography and thinking, Rhacel Parreñas challenges conventional views about sex work and sex trafficking, revealing sex work as not solely prostitution but a continuum of practices, along which issues of volition, morality, and law collide and converge in complex dynamics."

"Illicit Flirtations draws on ethnographic immersion to illuminate the little understood reality of Filipina hostesses in Japan. Rhacel Salazar Parreñas's courageous, nuanced ethnography and provocative analysis of 'indentured mobility' make vital contributions to our understanding of the social realities of migration and to the debate on the policies that regulate it."

"Avoiding broad-brushstroke mischaracterizations of sex-work, Rhacel Parreñas makes an important contribution to transnational feminist scholarship by productively reworking multiple binaries—motion and stasis, fixity and freedom, opportunity and risk—through her concept of 'indentured mobility.' She refuses to view her subjects as victims in need of rescue by Euro-American feminists, while simultaneously enables a useful analysis of the vulnerability to human rights violations all these women experience."

"Illicit Flirtations is a daring rethinking of the conditions of trafficking, the nature of sex work, the meaning of citizenship, and the moral classifications given by the workers themselves to intimate labor performed for pay. Bold and daring, this engaging ethnography breaks theoretical ground by advancing our understanding of the relationship between the economic and the sexual, focusing on global exchanges of people as well as cash."

"After extensive research, which included several months working undercover as a hostess herself, Parreñas arrived at a nuanced understanding of [Filipina hostesses'] situation . . . The book brings together issues of gender and labor migration with discussion of human trafficking, contributing the theoretical concept of 'indentured mobility' to describe the hostesses' situation . . . [Parreñas] calls attention to the varied perceptions of the women themselves, noting that their experience of their work depends on the particular moral lens they use to evaluate and make sense of what they do." 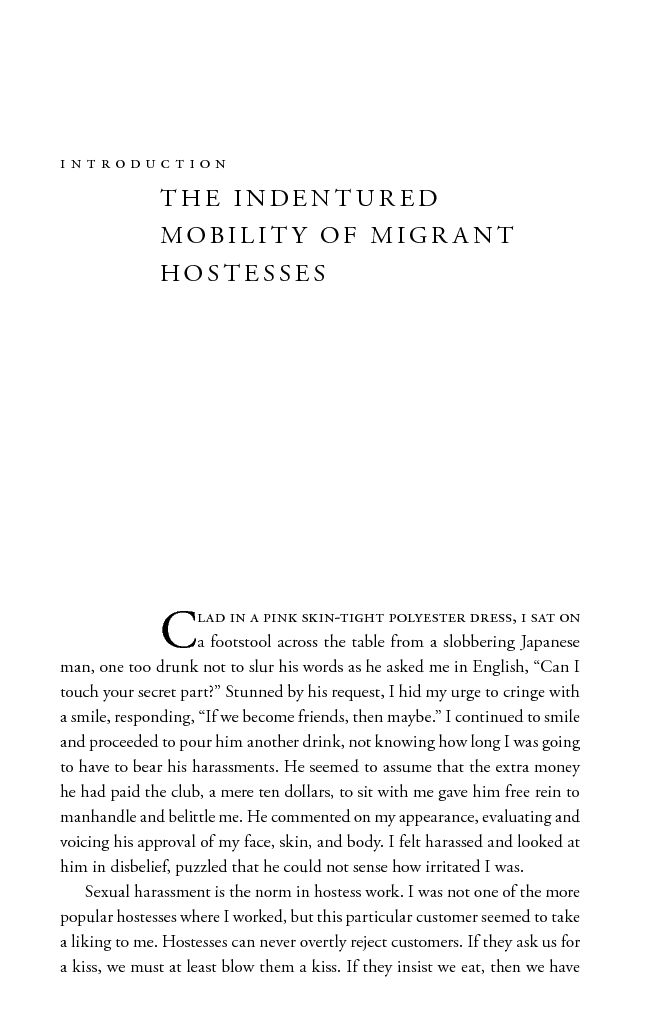 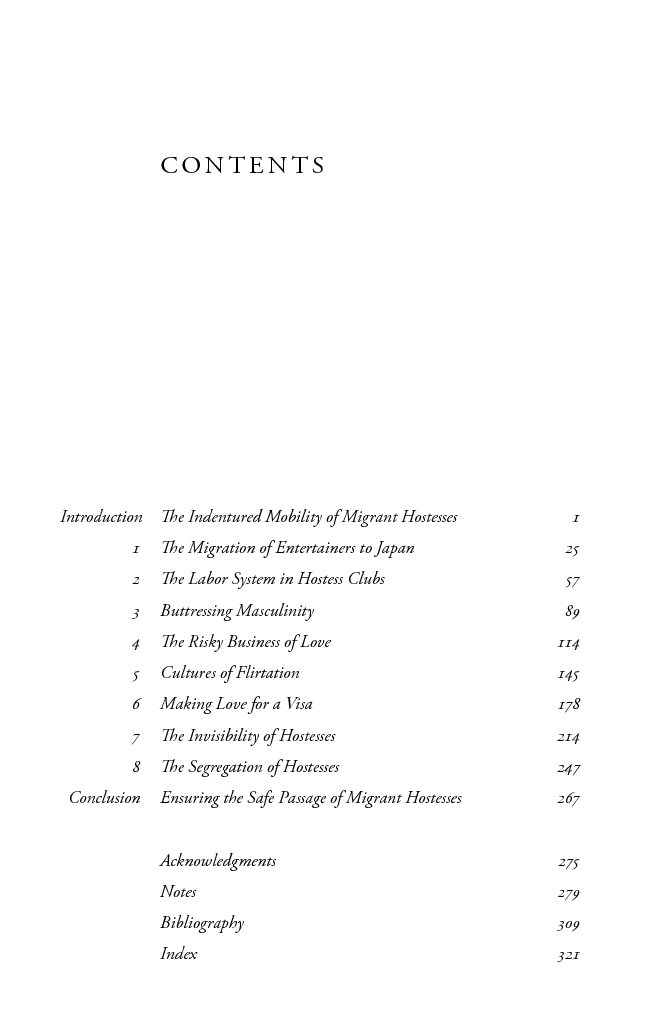