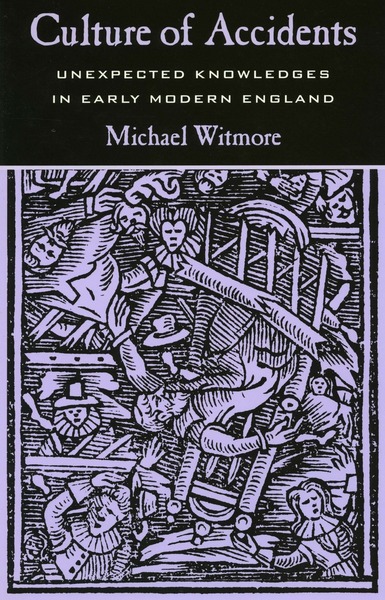 1st place in the 2002 Perkins Prize, sponsored by the Society for the Study of Narrative Literature.

Collapsing buildings, unexpected meetings in the marketplace, monstrous births, encounters with pirates at sea—these and other unforeseen “accidents” at the turn of the seventeenth century in England acquired unprecedented significance in the early modern philosophical and cultural imagination. Drawing on intellectual history, cultural criticism, and rhetorical theory, this book chronicles the narrative transformation of “accident” from a philosophical dead end to an astonishing occasion for revelation and wonder in early modern religious life, dramatic practice, and experimental philosophy.

Embracing the notion that accident was a concept with both learned and popular appeal, the book traces its evolution through Aristotelian, Scholastic, and Calvinist thought into a range of early modern texts. It suggests that for many English writers, accidental events raised fundamental questions about the nature of order in the world and the way that order should be apprehended.

Alongside texts by such canonical figures as Shakespeare and Bacon, this study draws on several lesser-known authors of sensational news accounts about accidents that occurred around the turn of the seventeenth century. The result is a cultural anatomy of accidents as philosophical problem, theatrical conceit, spiritual landmark, and even a prototype for Baconian “experiment,” one that provides a fresh interpretation of the early modern engagement with contingency in intellectual and cultural terms.

"Michael Witmore (Carnegie Mellon) has given us an extraordinary, erudite book (with full attention to Aristotelian, Scholastic, and Calvinist world views as challenged by chance, monstrous births, and other unexpected occurrences). His book fills a felt need and is sure to be a classic."