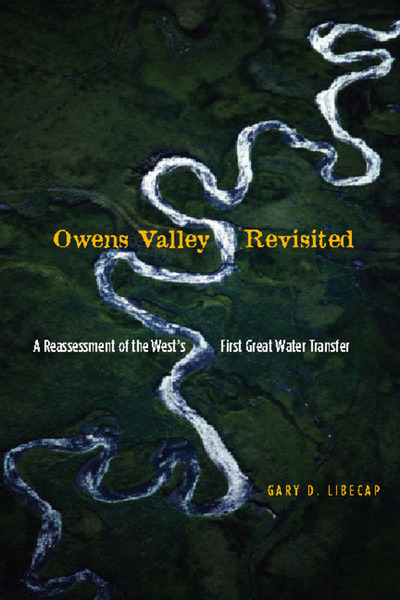 The legacy of Owens Valley raises concerns about how reallocation can occur. Although it took place over seventy years ago, the water transfer from Owens Valley to Los Angeles still plays an important role in perceptions of how water markets work. The memory of Owens Valley transfer is one of theft and environmental destruction at the hands of Los Angeles. In reassessing the infamous transfer, one could say that there was no "theft." Owens Valley landowners fared well in their land and water sales, earning more than if they had stayed in agriculture. In another sense, however, "theft" did occur. The water was not literally stolen, but there was a sharp imbalance in gains from the trade—with most of the benefits going to Los Angeles. Owens Valley, then, demonstrates the importance of distributional issues in water trades when the stakes are large.

Los Angeles water rights in the Owens Valley and Mono Basin have again been a front-page issue since 1970. New environmental and recreational values and air pollution concerns have ushered in demands to curtail the shipment of water from source regions for urban use.

Owen's Valley Revisited: A Reassesment of the West's First Great Water Transfer carefully explores how these sagas were addressed, considering the costs involved, and alternative approaches that might have resulted in more rapid and less contentious remedies. This analysis offers insights to guide the ongoing conversation about water politics and the future thereof.

Gary D. Libecap is Donald Bren Professor of Corporate Environmental Management, Bren School of Environmental Science and Management and Economics Department, University of California, Santa Barbara. Dr. Libecap is a Research Fellow and Associate at the Hoover Institution, the National Bureau of Economic Research, and the Property and Environment Research Center. He previously was Anheuser-Busch Professor of Entrepreneurial Studies, Economics, and Law and Director of the Karl Eller Center of the Eller College of Mangement at the University of Arizona.

". . . Libecap constructs a convincing revisionist history of the Owens Valley land and water purchases by the City of Los Angeles in the early 20th century."

"Libecap provides a stimulating new view of the infamous Owens Valley Water Purchase. Using scientific tools and objectively weighing the evidence, the book gives the reader an accurate understanding of this controversial and fascinating history."

"This book is an important contribution to the recent literature on institutions, property rights, and transaction costs. Libecap's careful correction of the historical record is a welcome addition to the ongoing debate about water transfer policy."

"In his latest book Owen's Valley Revisited, Libecap takes on one of the most enduring myths in western water history—the famous transfer of water from Owen's Valley to Los Angeles that occurred in the early part of the twentieth century The result is impressive: using extensive archival data, Libecap manages to convincingly demonstrate that the popular 'rap and pillage' myth surrounding Owen's Valley is in actuality much more complicated than generally perceived."

"Gary Libecap has produced a new economic analysis of the century-long, acrimonious relations between the Los Angeles's Department of Water and Power (LADWP), and Owen's Valley, a region of California that supplies water to Los Angeles His book belongs on the shelf of any water resources economist, as well as on the shelves of historians seeking multiple perspectives of the American West."

"Scholars of the Los Angeles-Owens Valley controversy will be most interested in the revisionist approach of Gary D. Libecap's Owens Valley Revisited . . . The book does provide a chronology and a solid bibliography as well as several maps, graphs, and tables that students of this story will find useful."