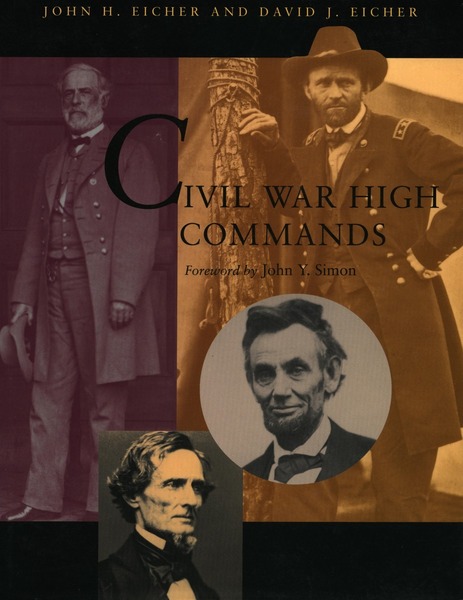 Based on nearly five decades of research, this magisterial work is a biographical register and analysis of the people who most directly influenced the course of the Civil War, its high commanders. Numbering 3,396, they include the presidents and their cabinet members, state governors, general officers of the Union and Confederate armies (regular, provisional, volunteers, and militia), and admirals and commodores of the two navies. Civil War High Commands will become a cornerstone reference work on these personalities and the meaning of their commands, and on the Civil War itself.

Errors of fact and interpretation concerning the high commanders are legion in the Civil War literature, in reference works as well as in narrative accounts. The present work brings together for the first time in one volume the most reliable facts available, drawn from more than 1,000 sources and including the most recent research. The biographical entries include complete names, birthplaces, important relatives, education, vocations, publications, military grades, wartime assignments, wounds, captures, exchanges, paroles, honors, and place of death and interment.

In addition to its main component, the biographies, the volume also includes a number of essays, tables, and synopses designed to clarify previously obscure matters such as the definition of grades and ranks; the difference between commissions in regular, provisional, volunteer, and militia services; the chronology of military laws and executive decisions before, during, and after the war; and the geographical breakdown of command structures. The book is illustrated with 84 new diagrams of all the insignias used throughout the war and with 129 portraits of the most important high commanders.

John H. Eicher is Professor of Chemistry Emeritus at Miami University of Ohio and a lifelong student of the Civil War. David J. Eicher is Managing Editor of Astronomy magazine and a well-known non-academic Civil War historian. He is the author of several books on the war, most recently Mystic Chords of Memory: Civil War Battlefields and Historic Sites Recaptured and The Civil War in Books: An Analytical Bibliography.

"Here is the reference work that Civil War historians have been waiting for. All arguments and confusion about full vs. brevet rank, seniority, jurisdiction, and dozens of other matters concerning military commanders and civilian officials in the Union and Confederacy are cleared up in this volume, which would have been as useful to Civil War contemporaries, if it had existed then, as it will be to modern students of the war."

"It is difficult to imagine the staggering amount of research that must have gone into the creation of this highly valuable reference work. All students of the military side of the Civil War, and especially those interested in the organizational structures and leading figures of the Union and Confederate high commands, should keep this volume near at hand."

"Civil War High Commands is a bibliophile's tour de force and a Civil War aficionado's dream. It combines in a single volume concise biographical information on nearly 4,000 of the war's movers and shakers, be they politicians, soldiers, or sailors. But that is not all. The authors include invaluable data that is necessary to an understanding of the mid-19th century military, its command structure, and mystique."

"The Eichers have devoted years to assembling their fascinating array of facts. . . . Rarely is a sound and practical reference book so much fun to use."

—from the foreword by John Y. Simon, editor of The Papers of Ulysses S. Grant

"This important new work is a welcome addition to the field of Civil War literature, and will without a doubt become the standard tool for research in questions related to high command in the Union and Confederate militaries and governments. . . . This book is highly recommended for every library that treats the Civil War in any respect. It should also be considered for the private libraries of Civil War buffs."

"Besides being a truly handy reference work, the Eichers' book is simply great fun to peruse, but beware: looking up one tidbit may lead you to browse and read for a very long time."

—The Journal of Southern History

"...it is an enormously valuable reference guide to the command structure of both sides during the Civil War."