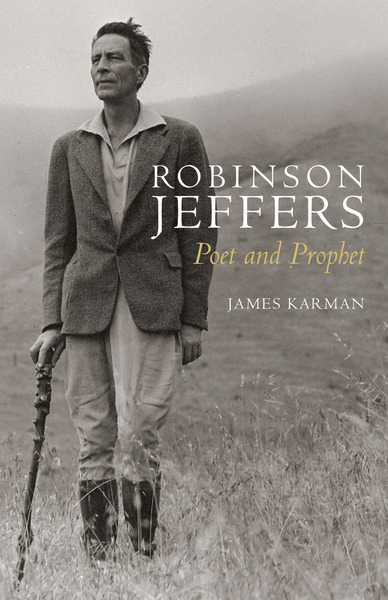 Very like leaves
upon this earth are the generations of men—
old leaves, cast on the ground by wind, young leaves
the greening forest bears when spring comes in.
So mortals pass; one generation flowers
even as another dies away.

Robinson Jeffers was born January 10, 1887 and died January 20, 1962. He and his generation came of age at the beginning of the last century, during a time of extraordinary change. Among American-born poets, Jeffers, Ezra Pound, H. D. (Hilda Doolittle), Marianne Moore, and T. S. Eliot were all about the same age. Amy Lowell, Robert Frost, Carl Sandburg, Wallace Stevens, William Carlos Williams, and Sara Teasdale were a few years older; Edna St. Vincent Millay, Archibald MacLeish, and E. E. Cummings were a few years younger. Each was born with an artistic gift that, like a sail, caught the wind of human longing and cast them forth, in search of a creative and meaningful life.

The generation of poets that passed away around the time Jeffers and his contemporaries were born included Emily Dickinson, who died in 1886, and Walt Whitman, who died in 1892. As precursors, both showed those who followed how to find and use a personal voice, how to express deep truths in simple language, how to share both joy and pain with perfect candor.

Each of these lessons served Jeffers and his contemporaries well. As they looked back at the nineteenth century, the Western tradition, and all of human history behind them, and as they looked forward to the twentieth century and the unknown human future stretching out before, they were emboldened to start fresh, to “make it new,” as Pound said, and to meet the world on their own terms. In them and through them, Modern poetry was born.

As time progressed and the twentieth century ran its course, critical regard for each poet fluctuated. Jeffers became famous, virtually overnight, with the publication of Tamar and Other Poems in 1924 and the expanded Roan Stallion, Tamar and Other Poems in 1925. By the end of the decade, with three additional books of candescent verse on bookstore shelves, he was arguably the most famous poet in America. When two more books soon followed, Time magazine took note and featured a portrait photograph of Jeffers, taken by his friend Edward Weston, on the cover of the April 4, 1932 issue. Jeffers remained popular through the 1930s, but by the end of the decade a number of influential critics had turned against him. In the 1940s, despite the overwhelming international success of his play Medea, written for and performed on Broadway by Judith Anderson, Jeffers’ reputation continued to slide. His poetry won honors in the 1950s, and his plays were performed around the world, yet many critics dismissed him—prompting Horace Gregory to ask, in a 1954 New York Herald Tribune essay titled “The Disillusioned Wordsworth of Our Age,” “‘Why does so much deep silence surround the name of Robinson Jeffers?’” This is a question that has puzzled attentive readers ever since.

In some ways, the question is misleading, for Jeffers has always had a wide audience. Tor House, his home in Carmel, California, is now a National Historic Landmark, visited by several thousand people every year; the Robinson Jeffers Association, an organization of scholars, publishes Jeffers Studies and hosts an annual conference devoted to his work; and books and articles about Jeffers continue to assess his achievement. Recent additions to an expanding list of publications include Robinson Jeffers and the American Sublime by Robert Zaller and Inventing the Language to Tell It: Robinson Jeffers and the Biology of Consciousness by George Hart. Forthcoming books include The Wild That Attracts Us: New Critical Essays on Robinson Jeffers edited by ShaunAnne Tangney, Towers of Myth and Stone: Yeats’s Influence on Robinson Jeffers by Deborah Fleming, and a comprehensive descriptive bibliography by Michael Broomfield.

In other ways, the silence surrounding Jeffers is easy to understand. As an anti-modern Modernist, his poetry is fundamentally different in both form and content from that of his contemporaries, and critics have devoted most of their attention to mainstream verse.

A typical modern poem, for instance, is composed in the lyric mode—a short form concerned primarily with the expression of subjective thoughts, perceptions, and experiences. While there are many exceptions, the setting of a modern poem is usually current in time and place, diction leans toward the colloquial, lines are short, rhythms free, and a variety of devices (such as ambiguity, discontinuity, and irony) are used to complicate meaning.

Jeffers also composed lyric poems, but he devoted equal attention to narrative verse and drama. These long poetic forms, all but abandoned by others, provided Jeffers with opportunities for impersonal observation, the depiction of life in different historical settings, character development, and dialogue. His lines were usually long, sometimes extending to twenty words or more, and employed complex, organic rhythms based on heartbeats, tidal recurrences, and other natural measures. In an effort to avoid obscurity, he used poetic devices to stabilize and clarify meaning.

With regard to content, the difference between Jeffers and his contemporaries was even greater. Jeffers was the only major poet of his time who lived in the far west, and much of his poetry attempts to capture the beauty of the wild Pacific shore. People were important to him—indeed, a main theme of his work involves their tragic suffering—but he saw human history within the context of natural history, and, with an evolutionary view of life in mind, he embraced an astronomical and geological view of time. From that vantage point, all existence, including that of the entire human species, was ephemeral. As he surveyed the course of history—writing of Greece, Rome, the birth of Christendom, the Middle Ages, modern Europe, and America—he saw each cultural moment, and civilization as a whole, as wave-like, destined to rise, fall, and ultimately dissolve away.

Jeffers’ experience of deep time added a vatic amplitude to his verse, and a sharp moral edge. He spoke repeatedly about the destruction of Earth’s environment, warning, shrilly at times, of the effects of overpopulation, pollution, and the exploitation of natural resources. He also studied the mystery of human cruelty, and condemned violence on all levels: against animals, between persons, within families, and amongst nations. Jeffers was particularly concerned with the manifestation of cruelty in love—or, more narrowly, from a Darwinian and Freudian perspective, in sex—and he examined the destructive complications of desire with a frankness that appalled some readers. The cruelty of war was another major theme of his work, and his reflections on the two main conflagrations of his time, World War I and World War II, were among the most bitter and searing of the century.

In Jeffers’ denunciation of war, and in his excoriation of world leaders (Roosevelt included), some readers heard the furious voice of a biblical prophet, and, given his upbringing, that voice may in fact be there. Jeffers rejected the biblical tradition, however, along with Christianity, all organized religions, and spiritual leaders in general. Nevertheless, his poetry is permeated with philosophical and religious concerns, and much of it is devoted to the search for Truth, Beauty, and the Good—a fool’s errand, in the eyes of many. Jeffers found all three in a pantheistic view of nature and, thus, in a direct experience of God.

When Jeffers died in 1962, his friend Mark Van Doren wrote a eulogy that was published in the Proceedings of the American Academy of Arts and Letters. People thought of Jeffers, he says, as a remote and solitary figure—“a man of improbable, grim, abstracted beauty, indeed a hawk, a figure of granite, rather than a man at all”—but, to those who knew him, he “was affectionate and humorous, warm-hearted and courtly.” Some people, he adds, regarded Jeffers’ poetry as “uncompromising” and, because of the way it challenges accepted norms, “unacceptable.” But one need not agree with Jeffers, Van Doren says, to appreciate him: “If Jeffers was wrong he will be wrong forever, and he would be the first to admit this. Right or wrong, however, his poems have power. And this power, at a guess, will last into other centuries than this one which he thought so pitifully mistaken.”

Was Jeffers wrong? Decades before anyone worried about the effects of unbridled development on the environment, or disasters like Love Canal and the Exxon Valdez oil spill, Jeffers mourned “the broken balance, the hopeless prostration of the earth / Under men’s hands and their minds, / The beautiful places killed like rabbits to make a city, / The spreading fungus, the slime-threads / And spores; my own coast’s obscene future” (“The Broken Balance”). Long before anyone raised concerns about the shootings at Kent State, the beatings in Selma, Alabama, or the transformation of the United States into a militarized superpower, Jeffers said “beware . . . of the police in armed imperial America” (“I Shall Laugh Purely”). And years before jihad became a familiar word all around the world, Jeffers saw a looming threat: “Faith returns, beautiful, terrible, ridiculous, / And men are willing to die and kill for their faith. / Soon come the wars of religion; centuries have passed / Since the air so trembled with intense faith and hatred” (“Thebaid”).

Right or wrong, the issues raised by Jeffers remain pressing; they are at the very center of public life; and the way we address them in coming years will affect, as Jeffers knew, not only the future of America, but the fate of humanity. The time is propitious, it seems, for a reexamination of Jeffers and for a careful consideration of the insights his poetry contains.

The concise biography that follows is a revised version of my introduction to volume one of the Collected Letters, where it served as an overview of Jeffers’ life and work—one that could be read as a continuous narrative, or, for readers seeking a deeper understanding of moments in time when specific letters were written, as a series of chronological episodes. The purpose of the introduction was to identify the people, issues, and events that shaped Jeffers, to list and describe each of his major books, and to explain his response to and place in the modern world. That purpose remains the same in this edition. Readers who desire more than an overview, or who are curious about particular details mentioned in the text, should turn to the Collected Letters, where the full arc of Jeffers’ life is traced through correspondence, and where he and Una tell their story in their own words. Key portions of that story—such as family life at Tor House, travels, marital conflicts, and relationships with friends—can only be understood through a study of the letters, together with the explanatory notes that accompany them.

Complete texts of the poems and essays by Jeffers cited in this biography can be found in either the Collected Poetry or the Collected Letters (with the exception of The Alpine Christ, which is only available in The Alpine Christ and Other Poems, edited by William Everson). Many of the poems are also included in The Selected Poetry of Robinson Jeffers, edited by Tim Hunt, and in The Wild God of the World: An Anthology of Robinson Jeffers, edited by Albert Gelpi.

For most citations, basic source information is provided within the text. In many instances, additional documentation can be found in the Collected Letters. Historical facts—such as population statistics and wartime casualty figures—are drawn from widely available public sources and government documents.