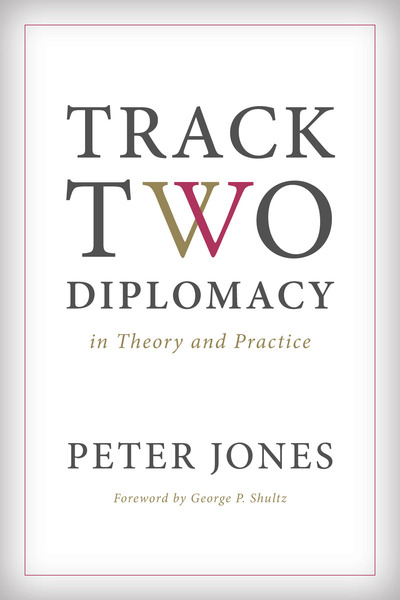 Track two diplomacy is something I heard of frequently during my years as Secretary of State. To be honest, I was often somewhat leery of it. I did not question the motives or the integrity of most who were engaged in it. Rather, my concern was that it would get in the way of our official diplomatic efforts and confuse others as to where the United States stood on various matters. More than once, I gave instructions to State Department officials to inform a foreign government in no uncertain terms that the US Government had nothing to do with this or that Track Two initiative and did not endorse it.

Since leaving office, I have had a deeper association with Track Two and have taken part in some of these discussions. My views have evolved now that I am no longer charged with the day-to-day management of foreign policy (which can be largely a matter of rushing from one crisis to another, but must be transformed and informed always by a sense of strategy) and have time to reflect more on things. In particular, I now realize that properly done Track Two does not seek to “get in the way” of Track One diplomacy, as those in office sometimes fear, but rather to complement it, often by going to places where Track One is unable to tread and by tackling subjects it cannot approach.

To my mind, this is the essence of useful Track Two. It achieves its greatest contributions when it provides a forum for the kinds of discussions which are vitally necessary if a thorny problem is to be dealt with. In this sense, Track Two provides a mechanism to explore new ways forward without committing anyone to anything. When it is carefully and well done, that is extraordinarily useful. Most importantly, Track Two provides a space whereby serious people can consider and develop alternate and creative ways of viewing things—something governments mired in conflict are notoriously bad at doing, I have generally found.

To be successful at this challenging task, it seems to me that a few key considerations need to be borne in mind. First, these dialogues must involve influential people who can sway opinion at home. These are not “academic” discussions; they are meant to generate ideas which can have a real-world impact. Often, those taking part will be retired leaders or retired senior officials, but they can also be civil society leaders, depending on what audience the particular Track Two is trying to reach. What matters is that they should be people to whom others will listen when they come home with new and controversial ideas. Second, it is critical that the mood around the table allow for a far-reaching and no-holds-barred discussion. At the same time, the discussion must have a basis in reality in terms of what can work. The creation of a conversation which is at once far-reaching but also grounded in reality is a difficult balancing act. I particularly like the fact that this technique is referred to in the field as a “problem solving” approach, which I think is exactly right; it is not about defending positions but about mutually and collaboratively trying to understand and then resolve a problem. Which brings me to my third observation: the role of the convener and facilitator of the dialogue, the so-called third party, is crucial in creating an atmosphere in which the right kind of discussion can take place, and in gently nurturing and steering the process over time. It is a complex role which is often underappreciated and misunderstood. One of the greatest contributions of this book is to explore the role of the third party and to demystify it.

This book is the result of a challenge. In 2011, I sponsored Peter Jones to bring to the Hoover Institution at Stanford University a meeting of an ongoing India–Pakistan Track Two project he has been running called “The Ottawa Dialogue.” It was a meeting about the difficult nuclear relationship between these two countries, and it was part of a series which had quietly been underway for some time and which has continued since. That meeting, and the others in the series, brought together retired people from the two countries who had held very senior positions of leadership on these issues just a short time before, as well as subject-matter experts from academe and civil society in the two countries. The discussions were tough, even brutal at times, but productive. The mood was informal, even though it was not always comfortable, and the participants seemed willing, even eager, to explore ideas that they had not been able to when they had been in office.

Sitting in on these meetings, and talking with Peter about his ongoing Track Two work in this region and others, caused me to wonder if anyone had ever written a book which presented and analyzed the current state of thinking about Track Two and its place in international relations. This would not be a theoretical book, although it should be informed by theory, but rather a book that would make the subject accessible to officials and students. When Peter told me that there had been some books which tried to tackle this in years past, though with mixed results, and that there was nothing recent which covered this ground, I challenged him to write the book. You hold in your hands the result.

What makes for successful Track Two? As Peter shows us in these pages, much depends on what a given project seeks to achieve—there are many different definitions of Track Two and each has its particular set of objectives and methods. Indeed, one of the most useful elements of this book is its careful and rigorous unpacking of the term “Track Two,” which is too often casually used to cover a myriad of different kinds of dialogues. By showing us that dialogues held under the rubric “Track Two” can have very different methods, participants, and objectives, this book provides a critical guide to those who intersect with Track Two, whether as officials, scholars, or students, as to how to approach the subject and understand its potential contributions.

I also appreciate the fact that the book does not shy away from discussing the limitations of Track Two. These are important. There is a tendency for enthusiasts to believe that their favored method is applicable in all cases, when it is not. People who are active in the field, and those who study it, must be aware when Track Two is not appropriate to a situation or problem. In my experience, cases where Track Two projects overstepped their ability to be helpful were the ones which did damage and brought disrepute to the field as a whole. As in so many things, really well-done Track Two is often quiet and few know of it, while badly done Track Two generates considerable notoriety.

I am excited about this book. I wish it had been around when I was Secretary of State. It brings together in a clear and readable way the theory of Track Two, but tempers it critically with real-world insights and observations. Peter’s background as an official who has negotiated important international agreements, as an academic who brings scholarly rigor to his subject, and as someone who both practices and studies Track Two at the highest level shines through on every page.

I challenged Peter to write the book on Track Two. He has met my challenge.