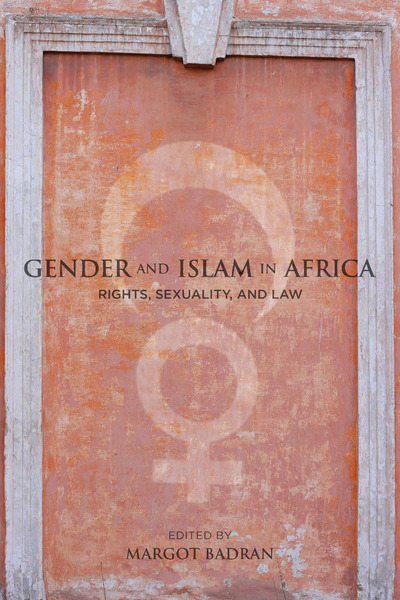 Gender and Islam in Africa
Rights, Sexuality, and Law
Edited by Margot Badran

Gender and Islam in Africa examines ways in which women in Africa are interpreting traditional Islamic concepts in order to empower themselves and their societies. African women, it argues, have promoted the ideals and practices of equality, human rights, and democracy within the framework of Islamic thought, challenging conventional conceptualizations of the religion as gender-constricted and patriarchal.

The contributors come from the fields of history, anthropology, linguistics, gender studies, religious studies, and law. Their depictions of African women's interpreting and reinterpreting of Islam go back into the nineteenth century and up to today, including analyses of how cultural media such as popular song and film can communicate new gender roles in terms of sexuality and direct examinations of religious and religiously based family law and efforts to reform them.

Margot Badran is a historian of women and gender issues in Muslim societies. She is a Senior Scholar at the Woodrow Wilson Center and a Senior Fellow at the Prince Alwaleed ibn Talal Center for Muslim-Christian Understanding, Georgetown University. Her most recent book is Feminism in Islam.

"Margot Badran has assembled in this very useful volume 12 articles by outstanding scholars and ethnographers in the fields of African Studies and Islamic Studies. By focusing on political, social, and economic societal micro-processes that are often ignored in text-focused Islamic legal studies, this volume helps reveal how particular conceptions of Islamic law are naturalized and valenced 'a historical' in particular African societies . . . [The dynamic convergence of ethnography and scripture is] highly useful and productive . . . in this excellent volume."

"Margot Badran has served the academic community well by providing a rich collection of essays focused on the role of Islam in shaping women's rights, the institutions of marriage, and the role of family law . . . This is an important collection of essays, which challenges the ideas of a homogenous African Islam, while also showing the ways in which Muslim women are challenging patriarchal concepts of society and the family within the context of various types of 'embodied', historically contextualized interpretations of the Islamic tradition. It places African Muslim debates about gender and family firmly within the greater Islamic context while respecting the specific situations of various African countries."

"In this path-breaking interdisciplinary collection, Margot Badran brings together scholars from almost the entire continent . . . to render visible connections and contrasts that are frequently lost in the balkanization of work on Islam. This volume goes a long way toward showing the centrality of ender dynamics to the contemporary ferment over how to define a modern Islamic future in Africa, and it places women as agents and interpreters of Islam at the center of these debates. Rather than simply celebrating female agency as an end in itself, the authors provide sensitive studies of how women negotiate complex discursive and political terrains."

"The volume provides a much welcome contribution to the literature on Islam and gender in Africa, and will be of interest to graduate students and scholars alike."

"This book both presents new and original work and provides a glimpse at the state of the art among scholars who have a sustained commitment to an extremely difficult and contentious topic."