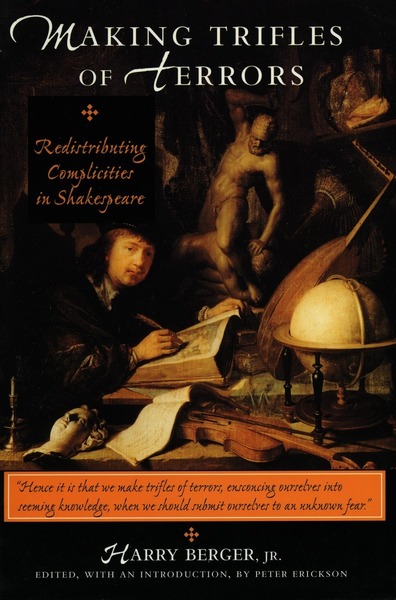 This collection of essays includes some of the most recent work of a master critic at the height of his powers. Of the fourteen essays, written from the late 1970's to the present, three have never before been published; the essays' appearance in a single volume makes available for the first time the full scope of Berger's unique approach to ethical discourses in Shakespeare's plays. The sequence of essays displays both the continuity and the revisionary development that mark his critical practice since the early work on The Tempest, Troilus and Cressida, and the Elizabethan theater.

When one compares Berger's earlier work from the 1960's with the writing from the 1980's and 1990's in the present collection, one sees that the difference stems primarily from the impact on the later work of his encounters with the whole range of structuralist and poststructuralist theory. Much of the excitement and vitality of Berger's current work comes from his efforts to incorporate new methodological influences into his previous system. Because he comes to poststructuralism as a mature critic whose larger interpretive framework is already in place, his response is not simply to immerse himself in the new theoretical modes and adopt them wholesale, but rather to make them his own.

Among the plays discussed are The Merchant of Venice, Much Ado About Nothing, King Lear, Macbeth, 2 Henry IV, Richard II—and, in two of the new essays, 1 Henry IV and Measure for Measure. Also new is Berger's retrospective account of his critical development in the extensive opening "Acknowledgments."

“This collection represents a decade of writing by a uniquely brilliant critic who combines intense sensitivity to textual nuance with extraordinary theoretical agility. Complex and sophisticated, these essays brim with thrills, gags, twists, and flashes. And Shakespeare's texts never quite read the same again.”—Margreta de Grazia, University of Pennsylvania.