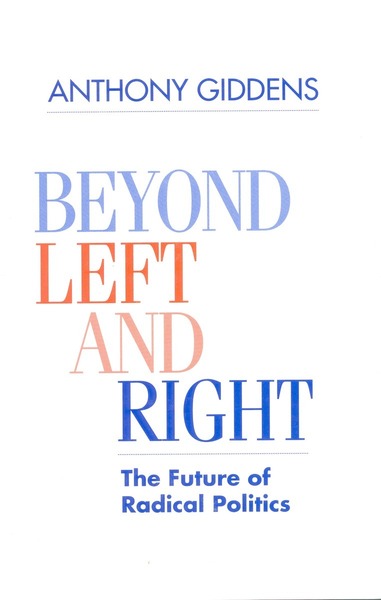 Beyond Left and Right
The Future of Radical Politics
Anthony Giddens

How should one understand the nature and possibilities of political radicalism today? The political radical is normally thought of as someone who stands on the left, opposing backward-looking conservatism. In the present day, however, the left has turned defensive, while the right has become radical, advocating the free play of market forces no matter what osbtacles of tradition or custom stand in their way.

What explains such a curious twist of perspective? In answering this question, Giddens develops a new framework for radical politics, drawing on what he calls "philosophic conservatism," but applying this outlook in the service of values normally associated with the left. The ecological crisis is at the core of this analysis, but is understood by Giddens in an unconventional way—as a response to a world in which modernity has run up against its independently human intervention, and the end of tradition, combined with the impact of globalization, are the forces which now have to be confronted, made use of and coped with.

This book provides a powerful interpretation of the rise of fundamentalism, of democracy, the persistence of gender divisions and the question of a normative political theory of violence. It will be essential reading for anyone seeking a novel approach to the political challenges we face at the turn of the twenty-first century.

"The author, a noted sociologist at Cambridge University, begins by critiquing the relevance of socialism, neoliberalism, and conservatism for a world characterized by globalization, the abandonment of tradition, and pervasive uncertainty stemming from socially manufactured risk. . . . The book contains useful insights into the difficulties of the welfare state."