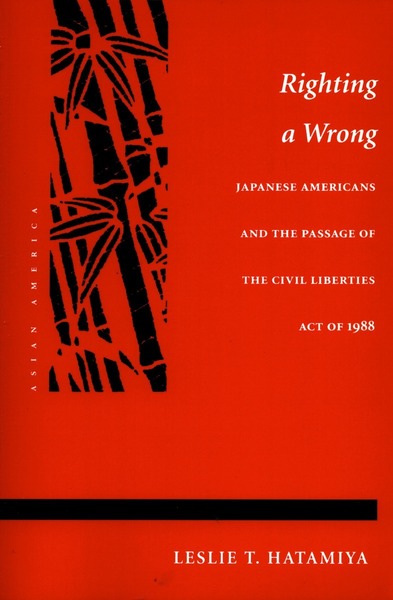 Righting a Wrong
Japanese Americans and the Passage of the Civil Liberties Act of 1988
Leslie T. Hatamiya
SERIES: Asian America

In 1982, a congressional commission concluded that the incarceration of 120,000 Americans of Japanese ancestry during World War II resulted from racism, war hysteria, and failed political leadership. Against long odds, the commission's recommendation that the U.S. government offer financial redress became law on August 10, 1988, when President Reagan signed the Civil Liberties Act. This book is a case study of the political, institutional, and external factors that led to the passage of this controversial legislation. Based on extensive interviews with Senators, members of Congress, key members of their staffs, and lobbyists, as well as statistical analyses of roll call votes, this book provides a uniquely rich account of the passage of a federal law. It also places the campaign for redress in the broader theoretical context of the workings of Congress and the policy-making process.—Publisher description.