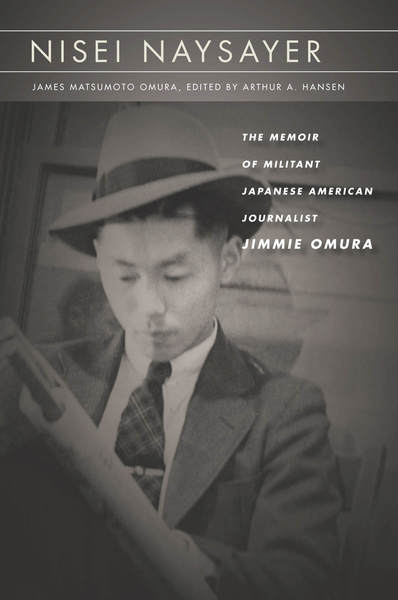 Among the fiercest opponents of the mass incarceration of Japanese Americans during World War II was journalist James "Jimmie" Matsumoto Omura. In his sharp-penned columns, Omura fearlessly called out leaders in the Nikkei community for what he saw as their complicity with the U.S. government's unjust and unconstitutional policies—particularly the federal decision to draft imprisoned Nisei into the military without first restoring their lost citizenship rights. In 1944, Omura was pushed out of his editorship of the Japanese American newspaper Rocky Shimpo, indicted, arrested, jailed, and forced to stand trial for unlawful conspiracy to counsel, aid, and abet violations of the military draft. He was among the first Nikkei to seek governmental redress and reparations for wartime violations of civil liberties and human rights.

In this memoir, which he began writing towards the end of his life, Omura provides a vivid account of his early years: his boyhood on Bainbridge Island; summers spent working in the salmon canneries of Alaska; riding the rails in search of work during the Great Depression; honing his skills as a journalist in Los Angeles and San Francisco. By the time of the attack on Pearl Harbor, Omura had already developed a reputation as one of the Japanese American Citizens League's most adamant critics, and when the JACL leadership acquiesced to the mass incarceration of American-born Japanese, he refused to remain silent, at great personal and professional cost. Shunned by the Nikkei community and excluded from the standard narrative of Japanese American wartime incarceration until later in life, Omura seeks in this memoir to correct the "cockeyed history to which Japanese America has been exposed."

Edited and with an introduction by historian Arthur A. Hansen, and with contributions from Asian American activists and writers Frank Chin, Yosh Kuromiya, and Frank Abe, Nisei Naysayer provides an essential, firsthand account of Japanese American wartime resistance.

James Matsumoto Omura (1912–1994) was a newspaper editor and later operated a landscaping business in Denver, Colorado. He received a Lifetime Achievement Award from the Asian American Journalists Association in 1989.

"Nisei Naysayer is an essential and eagerly-awaited account of Japanese America's resistance in American-style concentration camps during World War II.Offering new insight into Omura's controversial sedition trial, Nisei Naysayer reveals the depth of Omura's commitment to constitutionalism and freedom of the press. Expertly annotated by Art Hansen, this unique exposition will be invaluable for students and scholars alike."

"James Omura was a truth-teller silenced in his own time. His legal and moral opposition to the wartime treatment of Japanese Americans was too much for both the US government and the Japanese American Citizens League, and they shut him down. Seventy-five years later, the silence is broken with the publication of Omura's memoir, Nisei Naysayer. Scrupulously edited and annotated by Arthur A. Hansen, this memoir reminds us what a courageous voice of resistance sounds like."

"Contrarian Jimmie Omura altered history and the writing of history, as evidenced in this superbly edited memoir. His life righted the wrongs of civil liberties denied and the errors of accommodationist histories."

"Impeccably edited by Arthur Hansen, this memoir by the dedicated American patriot Jimmie Omura spans his early life through the end of World War II, revealing the rebuke and ostracism he endured, and the courage he exhibited in his search for justice. Omura's moral compass and well-articulated, incisive critiques are a wellspring of inspiration."

—Eileen H. Tamura, author of In Defense of Justice: Joseph Kurihara and the Japanese American Struggle for Equality