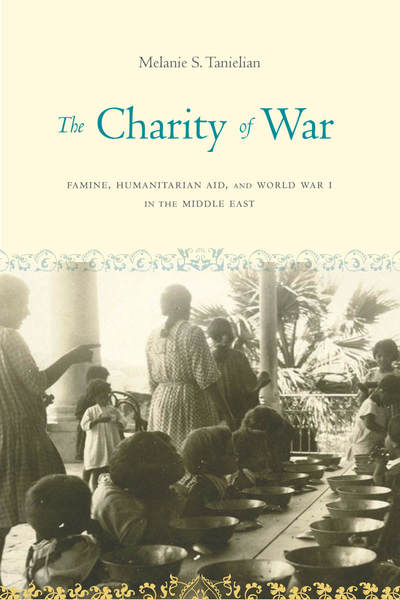 The Charity of War
Famine, Humanitarian Aid, and World War I in the Middle East
Melanie S. Tanielian

With the exception of a few targeted aerial bombardments of the city's port, Beirut and Mount Lebanon did not see direct combat in World War I. Yet civilian casualties in this part of the Ottoman Empire reached shocking heights, possibly numbering half a million people. No war, in its usual understanding, took place there, but Lebanon was incontestably war-stricken. As a food crisis escalated into famine, it was the bloodless incursion of starvation and the silent assault of fatal disease that defined everyday life.

The Charity of War tells how the Ottoman home front grappled with total war and how it sought to mitigate starvation and sickness through relief activities. Melanie S. Tanielian examines the wartime famine's reverberations throughout the community: in Beirut's municipal institutions, in its philanthropic and religious organizations, in international agencies, and in the homes of the city's residents. Her local history reveals a dynamic politics of provisioning that was central to civilian experiences in the war, as well as to the Middle Eastern political landscape that emerged post-war. By tracing these responses to the conflict, she demonstrates World War I's immediacy far from the European trenches, in a place where war was a socio-economic and political process rather than a military event.

Melanie S. Tanielian is Assistant Professor of History at the University of Michigan.

"Melanie Tanielian provides us with an honest history of the miseries in Lebanon during the Great War, as well as the humanitarian efforts to relieve them. The Charity of War offers a unique story, neglected until now in other histories of the region. A highly original and important contribution."

"Melanie S. Tanielian's The Charity of War is an important work that contributes to our broader understanding of the origins of modern humanitarianism in the Middle East and beyond. Built on both a solid archival foundation and broad reading in famine and food insecurity, the book is a critical text in the emerging literature on the global history of humanitarian organizations, relief work, and development."

—Keith David Watenpaugh, University of California, Davis, and author of Bread from Stones: The Middle East and the Making of Modern Humanitarianism

"Deeply felt, thoughtfully considered, and impressively researched, The Charity of War places Beirut at the cutting edge of World War I history, alongside the local histories of wartime Paris, London, and Berlin. With an eye for the telling anecdote and the skill of a social analyst, Melanie Tanielian brings the reader into the heart of a city under siege, and reconstructs the complex web of social norms and political structures that converged toward catastrophe."

"For her part, Tanielian must be lauded for her diligence at employing previously neglected local sources. Particularly impressive is her work in the confessional communities' archives in Beirut. These 'new' sources, in tandem with established work, contribute to Tanielian's captivating memoir of a city and a region at war."