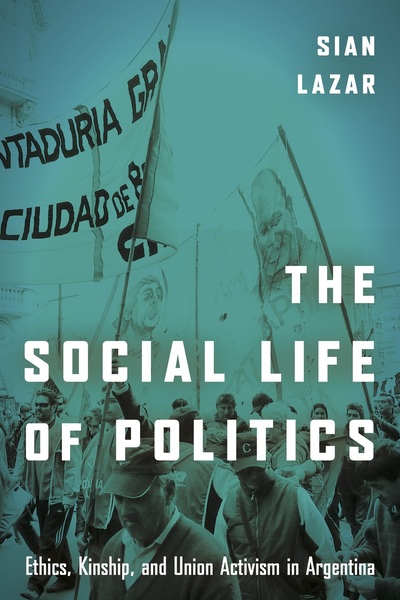 A central motor of Argentine historical and political development since the early twentieth century, unions have been the site of active citizenship in both political participation and the distribution of social, economic, political, and cultural rights. What brings activists to Argentine unions and what gives these unions their remarkable strength?

The Social Life of Politics examines the intimate, personal, and family dimensions of two political activist groups: the Union of National Civil Servants (UPCN) and the Association of State Workers (ATE). These two unions represent distinct political orientations within Argentina's broad, vibrant labor movement: the UPCN identifies as predominantly Peronist, disciplined, and supportive of incumbent government, while the ATE prides itself on its democratic, horizontal approach and relative autonomy from the electoral process. Sian Lazar examines how activists in both unions create themselves as particular kinds of militants and forms of political community. The Social Life of Politics places the lived experience of political activism into historical relief and shows how ethics and family values deeply inform the process by which political actors are formed, understood, and joined together through collectivism.

Sian Lazar is Senior Lecturer in Anthropology at the University of Cambridge. She is the author of El Alto, Rebel City: Self and Citizenship in Andean Bolivia (2008), among other books.

"Bringing the new anthropology of ethics to bear on the lives of union activists, Sian Lazar provides fresh insight into the moral foundations of political commitment and collective identity. Her nuanced approach to politics expands our understanding of the ethical. This book opens up fertile new terrain."

"The Social Life of Politics brings a sensitively deployed interdisciplinary approach to the study of Argentine trade unionism in the contemporary era. Lazar's fine blend of ethnographic research, theoretical sophistication and genuine compassion for trade unionists offers fresh insight into activism and political identity in the complex and shifting context of modern Argentina and Peronism. Latin Americanists and all who are interested in the emerging international contours of labor in the era of neoliberalism are in her debt."

"Written primarily for academic and graduate student audiences, The Social Life of Politics makes a number of key contributions to anthropological scholarship....[Lazar's] book is a theoretically compelling work that will no doubt provide a great source of inspiration for anthropologists studying subjectivation, kinship, union organizing, and class-based social movements."

"[A] rich ethnographic portrait of the internal dynamics of two public sector unions in Argentina....[Offers] key insights into an overlooked element of the anthropology of bureaucracy."