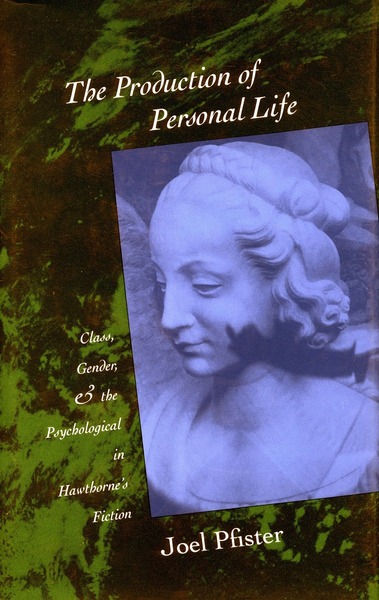 The Production of Personal Life
Class, Gender, and the Psychological in Hawthorne’s Fiction
Joel Pfister

This book aims both to demystify and to reconstitute 'Hawthorne' as an object of study by rereading Hawthorne's fictions, mainly those from the early 1840's to 1860, in the context of the emergence of a distinctively middle-class personal life (the domestic emotional revolution that accompanied the industrial revolution. Recent histories of middle-class private life, gender, the body, and sexuality now enable us to bring a more encompassing grasp of history to our reading of the 'psychological' in Hawthorne's writing. Rather than taking the conventional view that Freud explains Hawthorne's psychological themes, the author draws on the history of personal life to suggest that mid-century psychological fictions help, historically, to account for the surfacing of a bourgeois Freudian discourse later in the century. The production of Personal Life also asks why it was that women in mid-century fiction, especially that written by men, were represented as psychological targets of male monomaniacs in the home. By connecting the enforcement of middle-class 'feminine' roles to psychological tension between the sexes, Hawthorne's fiction at times implicitly critiques the sentimental construction of gender roles on which the economic and cultural ascendancy of his class relied.

"Pfister merges the best of both new historical and cultural studies in his treatment of the novels and the cultural ambivalence—about domesticity, motherhood, and the middle class—that Hawthorne's career illustrates."

"A provocative yet sensible reading, a welcome contribution to debates on Hawthorne's gender politics and to the new scholarship in domestic ideology."