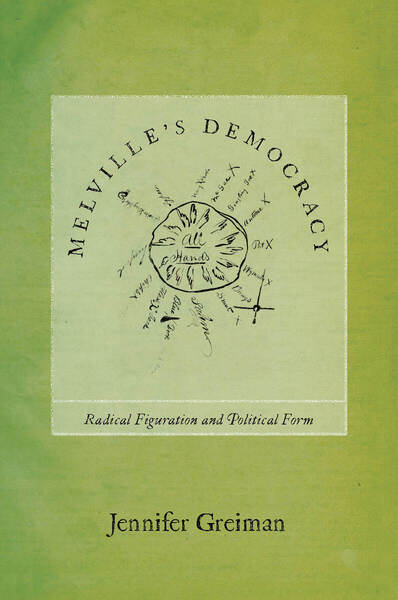 For Herman Melville, the instability of democracy held tremendous creative potential. Examining the centrality of political thought to Melville's oeuvre, Jennifer Greiman argues that Melville's densely figurative aesthetics give form to a radical reimagining of democratic foundations, relations, and ways of being—modeling how we can think democracy in political theory today.

Across Melville's five decades of writing, from his early Pacific novels to his late poetry, Greiman identifies a literary formalism that is radically political and carries the project of democratic theory in new directions. Recovering Melville's readings in political philosophy and aesthetics, Greiman shows how he engaged with key problems in political theory—the paradox of foundations, the vicious circles of sovereign power, the fragility of the people—to produce a body of radical democratic art and thought. Scenes of green and growing life, circular structures, and images of a groundless world emerge as forms for understanding democracy as a collective project in flux. In Melville's experimental aesthetics, Greiman finds a significant precursor to the tradition of radical democratic theory in the US and France that emphasizes transience and creativity over the foundations and forms prized by liberalism. Such politics, she argues, are necessarily aesthetic: attuned to material and sensible distinctions, open to new forces of creativity.

"Greiman succeeds at the difficult task of saying something new about democracy in her original reading of Melville as a systematic thinker of it. This is an excellent book, wonderfully written and researched."

—Colin Dayan, author of With Dogs at the Edge of Life

"In Greiman's dazzling analysis, Melville emerges as a political theorist in his own right whose 'figurative imagination' gives us new forms, new language, new narratives to explore what democracy is and what it should be."

—Nathan Wolff, author of Not Quite Hope and Other Political Emotions in the Gilded Age