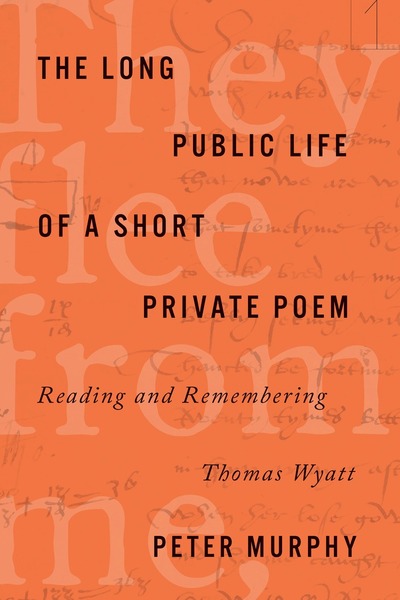 Thomas Wyatt didn't publish "They Flee from Me." It was written in a notebook, maybe abroad, maybe even in prison. Today it is in every poetry anthology. How did it survive? That is the story Peter Murphy tells—in vivid and compelling detail—of the accidents of fate that kept a great poem alive across 500 turbulent years. Wyatt's poem becomes an occasion to ask and answer numerous questions about literature, culture, and history. Itself about the passage of time, it allows us to consider why anyone would write such a thing in the first place, and why anyone would care to read or remember the person who wrote it. From the deadly, fascinating circles of Henry VIII's court to the contemporary classroom, The Long Public Life of a Short Private Poem also introduces us to a series of worlds. We meet antiquaries, editors, publishers, anthologizers, and critics whose own life stories beckon. And we learn how the poem came to be considered, after many centuries of neglect, a model of the "best" English has to offer and an ideal object of literary study. The result is an exploration of literature in the fine grain of the everyday and its needs: in the classroom, in society, and in the life of nations.

"We take great poems to have survived history by virtue of their excellence. Peter Murphy shows how wrong we are. He tells a vivid, compelling story of one poem's survival across five centuries of reckless printers, contentious critics, warring editors, and devoted readers, and of all the good luck that's kept it alive."

"Murphy turns the story of a single work into a moving, lyrical meditation on the vicissitudes of poetry as it enters the unpredictable worlds of readers, collectors, editors, and scholars. Beautifully attuned to what can and cannot be known about a poem's history, this book provides a model for understanding what it means for literature to endure."

"Beautifully written and utterly original, Peter Murphy's study of Wyatt's 'They Flee From Me' as it passes through the hands and minds of readers from the sixteenth century to the present is a profound meditation on how we remember and forget the past, on everything that makes us truly human."

"Peter Murphy's superb book takes Wyatt's perhaps most famous poem, "They flee from me,' and turns it into a parable of loss, rediscovery, and the fragility and chance of how the lyric poem's small proportions generate capacious meaning over time and vastly different cultural contexts. Murphy's work is admirable in so many ways it is hard to know where to begin....[It] provides singular access to the 'vse of Poesie' as the original cause for what it means to be human."

"Murphy's study and style are subtly and pleasurably convincing in their discussion of fine prosodic and stylistic distinctions....[One] of the most interesting provocations in the English Renaissance this year."