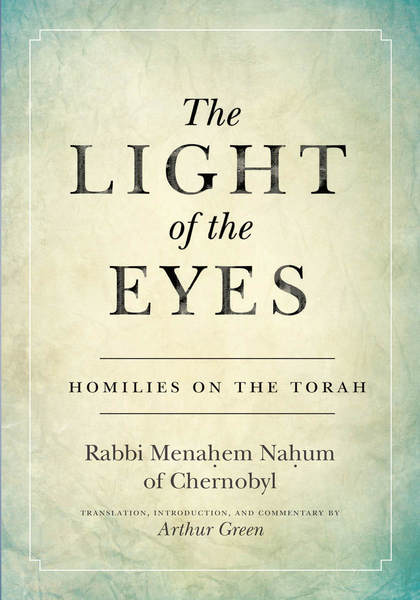 The Light of the Eyes
Homilies on the Torah
Rabbi Menahem Nahum of Chernobyl  Translation, Introduction, and Commentary by Arthur Green
SERIES: Stanford Studies in Jewish Mysticism

Hasidism is an influential spiritual revival movement within Judaism that began in the eighteenth century and continues to thrive today. One of the great classics of early Hasidism, The Light of the Eyes is a collection of homilies on the Torah, reading the entire Five Books of Moses as a guide to spiritual awareness and cultivation of the inner life. This is the first English translation of any major work from Hasidism's earliest and most creative period. Arthur Green's introduction and annotations survey the history of Hasidism and outline the essential religious and moral teachings of this mystical movement. The Light of the Eyes, by Rabbi Menahem Nahum of Chernobyl, offers insights that remain as fresh and relevant for the contemporary reader as they were when first published in 1798.

Arthur Green is the Irving Brudnick Professor of Jewish Philosophy and Religion at Hebrew College and serves as Rector of the Rabbinical School which he founded in 2003. A historian of Judaism and also a theologian, Professor Green is the author and translator of a number of works on Jewish mysticism and spirituality. He is the author of A Guide to the Zohar, among many other publications.

"The Light of the Eyes provides the English reader with a first-hand encounter with Hasidism in its spiritual heyday as a revival movement within Judaism. The author reads the entire Torah as a guidebook of spiritual awareness, combining mystical insights with a firm focus on compassion as the key to moral living. In this beautiful volume of translation and interpretation Green has persuasively presented Menahem Nahum of Chernobyl as a most faithful heir and disseminator of the teachings of Israel Ba'al Shem Tov."

"Arthur Green has given us the first complete, academic English translation of one of the classic works of early Hasidic thought, including scholarly introductions and notes. Written in an eloquent, lucid, and sophisticated style, Green's discussions reflect a lifetime of profound involvement in Hasidic literature. A judicious and implicated sensibility provides rich access to one of the outstanding creations of that literature."

"Arthur Green's The Light of the Eyes is a pedagogical and spiritual tour de force—of monumental proportions. Green is a master teacher and superb guide into each nuance and phrase. What is more: his work is a luminous theological event in its own right, sparkling with the truths of Hasidic religiosity and its challenge to consciousness. It is a gift for all."

—Michael Fishbane, The University of Chicago

"Menahem Nahum's Me'or Einayim is a clear, bold presentation of early Hasidic wisdom. Its central themes include: cultivating awareness of the divine energy animating all of existence, shaping one's moral character, and balancing the emotions. Arthur Green's superb edition guides the reader masterfully throughout. In his stimulating conclusion, Green distills the essence of Hasidism and retools it for today."

"Green's translation of The Light of the Eyes is indubitably a magnificent exposition of one of the masterpieces of early Hasidism. It makes accessible to the English reader the richness of early Hasidism, written by an author whose book had a profound impact on this movement."

"Green's translation is a major contribution to the field of early Hasidism and will make an important text from this Jewish movement more available to a larger audience."

The Times of Israel
More in Jewish Studies