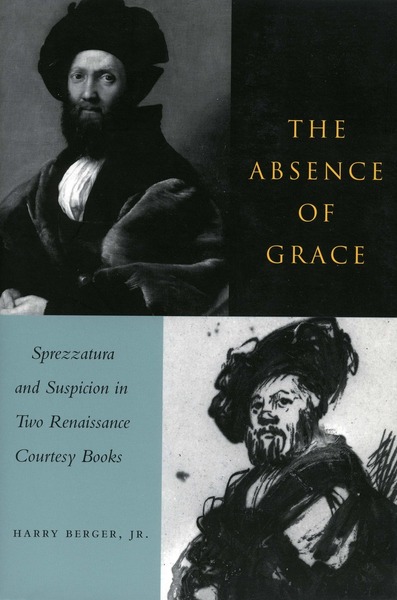 The Absence of Grace is a study of male fantasy, representation anxiety, and narratorial authority in two sixteenth-century books, Baldassare Castiglione's Il libro del Cortegiano (1528) and Giovanni Della Casa's Galateo (1558). The interpretive method is a form of close reading the author describes as reconstructed old New Criticism, that is, close reading conditioned by an interest in and analysis of the historical changes reflected in the text. The book focuses on the way the Courtier and Galateo cope with and represent the interaction between changes of elite culture and the changing construction of masculine identity in early modern Europe. More specifically, it connects questions of male fantasy and masculine identity to questions about the authority and reliability of narrators, and shows how these questions surface in narratorial attitudes toward socioeconomic rank or class, political power, and gender.

The book is in three parts. Part One examines a distinction and correlation the Courtier establishes between two key terms, (1) sprezzatura, defined as a behavioral skill intended to simulate the attributes of (2) grazia, understood as the grace and privileges of noble birth. Because sprezzatura is negatively conceptualized as the absence of grace it generates anxiety and suspicion in performers and observers alike. In order to suggest how the binary opposition between these terms affected the discourse of manners, the author singles out the titular episode of Galateo, an anecdote about table manners, which he reads closely and then sets in its historical perspective. Part Two takes up the question of sprezzatura in the gender debate that develops in Book 3 of the Courtier, and Part Three explores in detail the characterization of the two narrators in the Courtier and Galateo, who are represented as unreliable and an object of parody or critique.

Harry Berger, Jr. is Professor Emeritus of Literature and Art History at the University of California, Santa Cruz. He is the author, most recently, of Fictions of the Pose: Rembrandt Against the Italian Renaissance (Stanford, 1999).

"This book not only fulfills the long-standing need for a comprehensive study in English of della Casa's short but powerful treatise, but it will also undoubtedly have an impact on criticism of Castiglione and of the Italian court culture similar to that of classics such as Wayne Rebhorn's Courtly Performances, J.R. Woodhouse's Balesar Castiglione: A Reassessment of 'The Courtier,' and Robert Hanning and David Rosand's edition of the influential set of essays etitled Castiglione: The Ideal and the Real in Renaissance Culture. . . . [A] praiseworthy methodological achievement."

"[The Absence of Grace] is based on extremely careful readings of the two texts, and Berger displays his familiarity with the works while including enough citations to orient the reader. This book will be most useful to students of readings and texts in the Renaissance, and it also offers a valuable perspective on the literary production of court society in early modern Europe as a whole."