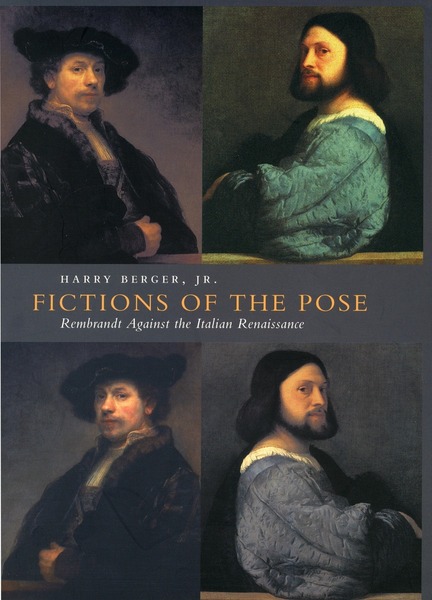 Fictions of the Pose
Rembrandt Against the Italian Renaissance
Harry Berger, Jr.

The foundational question this book explores is: What happens when portraits are interpreted as imitations or likenesses not only of individuals but also of their acts of posing—when the observer's attention is redirected so that the primary object the portrait imitates becomes the likeness not of a person but of an act, the act of sitting for one's portrait? This shift of attention involves another: from the painter's to the sitter's part in the act of (self-)portrayal.

At the ground level, Fictions of the Pose develops a hypothesis about the structure and meaning of portraiture. That foundation supports a first story devoted to the practices and politics of early modern Italian and Dutch portraiture and a second story devoted to Rembrandt's self-portraits, especially those in which he poses in fancy dress as if he were a patron. The author approaches the Rembrandt/Renaissance relation not as an art historian but as an interpreter trained in literary studies, taunted by the challenge of extending the practice of "close reading" from verbal to visual media and fascinated by the way this practice can show how individual works "talk back" to their contexts. The context for Rembrandt, the object and target of his "looking-glass theater," is the structure of patron/painter relations that developed during the Renaissance and influenced the very different conditions of patronage that emerged in the Dutch Republic around the turn of the seventeenth century.

The book is in four parts. Parts One and Two comprise an interpretive study of the technical and sociopolitical conditions within which portraiture becomes an important if problematic medium of self-representation in early modern Europe. The major portion of these two sections considers the structure and the consequences of a system of practices and conventions that governs poses in commissioned portraits. In Part Three the scene shifts from Italian to Dutch portraiture. Part Four is devoted to self-portraits by Rembrandt that are interpreted as responses to the conditions depicted in the first three parts. Through a series of close readings of individual works, the author demonstrates the ironic, polemical, and political force of Rembrandt's self-portraits.

Harry Berger, Jr., is Professor Emeritus of Literature and Art History at the University of California, Santa Cruz. He is the author, most recently, of Making Trifles of Terrors: Redistributing Complicities in Shakespeare (Stanford, 1997).

"Specialists in the field should be interested in Berger's re-interpretation of particular portraits by Rembrandt and other artists. . . . More general readers can benefit from these summaries. . . ."

"Berger comes to art history from outside of art history, like fresh air through an open window."