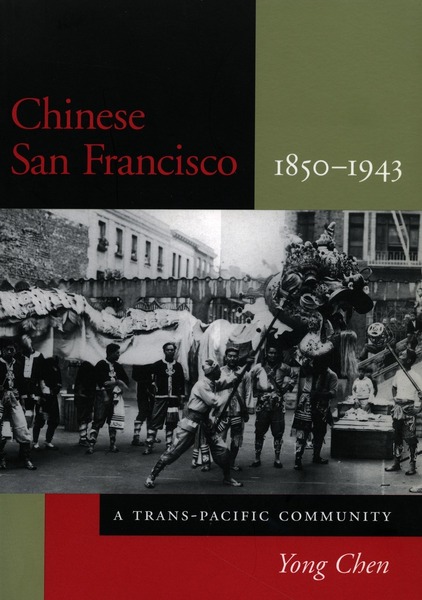 Founded during the Gold Rush years, the Chinese community of San Francisco became the largest and most vibrant Chinatown in America. For those Chinese traveling between the Old World and the New, San Francisco was a port of entry and departure. Many Chinese settled there, forming one of the oldest continuing ethnic communities in urban America.

This is a detailed social and cultural history of the Chinese in San Francisco, relating the development of various social and cultural institutions, ranging from brothels to the powerful "Six Companies." The book recaptures in vivid detail not only the community's collective mentalities but also the lives of ordinary people—laborers, theater-goers, gamblers, and prostitutes. In so doing, the author achieves what has been missing from virtually all the historiographic writing on the Chinese in America—he brings to life individual personalities with their varying human qualities.

The book shows the persistence of Chinese social patterns in San Francisco Chinatown, and demonstrates how the community helped shape white America's view of Asians in general and the development of race consciousness and strife. The author challenges several long-accepted views, such as the myth that the Chinese exodus to California in the mid-nineteenth century occurred mainly because of impoverishment in South China and the notion that the overwhelming majority of Chinese women in San Francisco were prostitutes. He also makes insightful comparisons of Chinese Americans with other ethnic groups.

The book makes imaginative use of a wide range of materials, private and public, fictional and statistical, in both Chinese and English, produced by both pro- and anti-Chinese sources. Among these are Chinese-language newspapers (including their advertisements), handbills, personal diaries, and other cultural productions. The author offers multidisciplinary analyses of such documents, showing the possibilities of extracting rich historical information from texts created for very different purposes.

Yong Chen is Associate Professor of History and Asian American Studies at the University of California, Irvine.

"Chen gives us new insights into the San Francisco community, its inhabitants and their lifestyles, and trans-Pacific connections. . . . Highly recommended."

"A rich and nuanced account of key events in San Francisco Chinatown."

"General audiences will enjoy this vivd depiction of Chinatown politics and insider perspectives on tourism. Experts will find this an illuminating . . . encounter with a tantalizing new array of sources."

"This impressively researched study of San Francisco's Chinatown is a valuable contribution to our understanding of the history of the Chinese in America."

"Chin has produced one of the finest first-person narratives available on the Chinese experience in America, and it will be an invaluable resource for students and scholars alike. As K. Scott Wong notes, Paper Son is much more than a story of one man's life in the United States; it "gives voice to thousands of paper sons.""

"This is a refreshing approach to this oft-studied period of Chinese immigration."

"By utilizing a variety of sources in English and Chinese, the author provides a vivid picture of the cultural and social transformation of Chinese Americans in San Francisco over the course of the century."

"By drawing on both Chinese- and English-language sources and by grounding his analysis in a thorough knowledge of social conditions in both China and California during this period (between the end of the California Gold Rush and the passage of the Repeal of the Chinese Exclusion Act), Chen has produced a robust and nuanced portrait of a dynamic and active diaspora community. He takes full advantage of a more sophisticated understanding of culture to document the ways in which Chinese Americans operated in and around the strictures of Confucian morality (and mainland Chinese nationalism) on the one hand and the various different segments of American society (missionaries, politicians, labor unions, and Euro-American capitalists) on the other. Chen also deals very well with issues such as gender and the "tourist trade" that established opportunities for European Americans to visit an exoticized and sensationalized Chinatown through the safety of a guided tour."