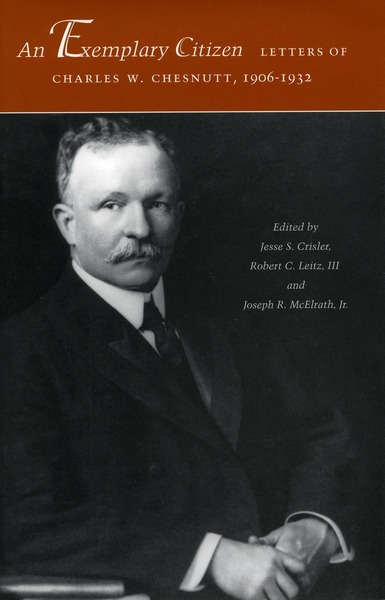 This book collects the letters written between 1906 and 1932 by novelist and civil rights activist Charles W. Chesnutt (1858-1932). Between 1885 and 1905, this pioneer in the African-American literary tradition published three novels, two books of short stories, a biography of Frederick Douglass, and many short stories and essays in prestigious periodicals—at the same time managing a stenography and court reporting firm in Cleveland, Ohio. His works, which featured the experiences of African-Americans in the ante- and post-bellum period, received favorable reviews. But they did not find a large and appreciative audience until many decades later when both the civil rights movement and increased interest in the African-American contribution to American cultural life resulted in the “rediscovering” of Chesnutt’s large body of writings.

Though he never saw the publication of another of his book-length manuscripts after 1905, Chesnutt continued to write fiction and essays, and to deliver speeches ranging from disenfranchisement to the life and works of Alexandre Dumas, and to act in behalf of the African-American cause through such organizations as the Committee of Twelve and the N.A.A.C.P. A dedicated integrationist opposed to “race-pride” movements of all kinds, Chesnutt in his post-1905 letters includes many references to the unfortunate consequences of racial segregation, addressed to both African-American and white correspondents.

These letters also reveal a multi-faceted personality with interests that transcended the issue of race and urged everyone to live life to the fullest. His correspondents included prominent members of the Harlem Renaissance as well as major American political figures Chesnutt sought to influence on behalf of his fellow African-Americans. As a successful businessman enjoying the amenities of upper middle class American life, a family man, and an Episcopalian who worshipped at a “white church,” Chesnutt in many respects embodied the realization of the American Dream. He was, as William Dean Howells termed Booker T. Washington, an “exemplary citizen” and a role model for all Americans.

"These letters from the last third of Chesnutt's life add crucial information to the understanding of this important and, until recently, largely neglected African-American author. The collection will provide a vital resource for scholars for years. I have nothing but praise for the editors—they have done a first rate job."

"The preface, introduction, and notes to the letters reflect the expertise of the editors, all of whom are experienced in textual editing; selection criteria and editing prinicples are well explained, and the thoroughly researched notes explain clearly Chesnutt's references and the contexts in which he wrote the letters."

"If Chesnutt's letters from 1906-1932 include fewer demonstrations of passionate engagement that hagiographically inclined readers might wish, they reveal something almost as interesting, a man of tireless intellectual energy who considered it his duty to know everything there was to know pertaining to the rights of African Americans in early twentieth-century America. Much of this knowledge is now available to us as well, thanks to the judgment and professionalism of Crisler, Leitz, and McElrath."