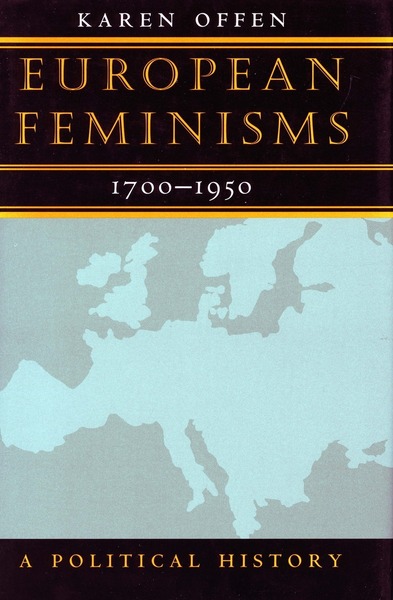 This ambitious book explores challenges to male hegemony throughout continental Europe. It focuses especially on France, but it also offers comparative material on developments in the German-speaking countries and in the smaller European nations and aspiring nation-states. Spanning 250 years, the sweeping coverage extends from Portugal to Poland, Greece to Finland, Ireland to Ukraine, and Spain to Scandinavia—as well as international and transnational feminist organizations.

The study has several objectives. For general readers and those interested primarily in the historical record, it provides a comprehensive, comparative account of feminist developments in European societies, as well as a rereading of European history from a feminist perspective. By placing gender, or relations between women and men, at the center of European politics, where the author argues that it belongs but from which it has long been marginalized, the book aims to reconfigure our understanding of the European past and to make visible a long but neglected tradition of feminist thought and politics.

On another level, by providing a broad and accurate historical analysis, the book seeks to disentangle some misperceptions and to demystify some confusing contemporary debates about the Enlightenment, reason, nature, equality vs. difference, and public vs. private, among others. The author argues that historical feminisms offer us far more than logical paradoxes and contradictions; feminisms are about sexual politics, not philosophy. Feminist victories are not, strictly speaking, about getting the argument right, nor is gender merely “a useful category of analysis”; sexual difference lies at the heart of human thought and politics.

Karen Offen is an independent scholar and historian who is affiliated as a Senior Scholar at the Institute for Research on Women and Gender, Stanford University. Her most recent books are Paul de Cassagnac and the Authoritarian Tradition in Nineteenth-Century France (1991) and Writing Women's History: International Perspectives (with Ruth Roach Pierson and Jane Rendall, 1991).

"This is an important work both for its recovery of little-studied aspects of European feminisms and for the reinterpretation of their main strands. The author's ability to situate feminisms squarely in the political and intellectual history of Europe, as well as in various chronological, geographical, and ideological contexts, is particularly impressive."

"[European Feminisms] is clear, sensible, and forceful, and it never lapses into jargon or anachronism. It offers a rich account of the aspirations, illusions, disillusions, flounderings, achievements, and advances of a compelling cause."

"European Feminisms provides the best-documented and most synthetic survey of the European-wide [feminist] effort to date."

"Karen Offen's long-awaited book provides an ambitious and substantially fascinating comparative narrative of themes in the history of European feminism. . . . This is a thoroughly reasearched, bibliographically impeccable, and interpretatively feisty history."

"Offen's history of European feminisms since 1700 is a fascinating tale of the complex relationship between political, state and feminist pragmatics. It will contribute to debates about what counts as a certain gain for feminism."

"[European Feminisms] will become an indispensable research tool for students and scholars. . . . By its range and research this represents a remarkable scholarly work and integrates the history of feminism convincingly into mainstream history. European Feminisms provides a record of feminims' struggles as being fundamentally political and is itself a work of politics as well as of history."

"[European Feminisms] marks a milestone in recent scholarship in women's history and particularly the history of feminism. The originality of the book lies not only in its reinterpretation of the history of feminism but also in its inclusion of countries usually considered to be on the periphery of European history."

"The most comprehensive analysis of European feminism to date."

"European Feminisms is a book that could be used in a wide variety of undergraduate and graduate courses in Women's Studies and gender studies, history, philosophy, and literature. Offen writes clearly, cogently, and persuasively . . . .For contemporary feminists, European Feminisms offers invaluable lessons from the past for the future."

“...in the tremendous breadth of its coverage, this book is a tour de force; there is none that compares.”—Journal of Modern History