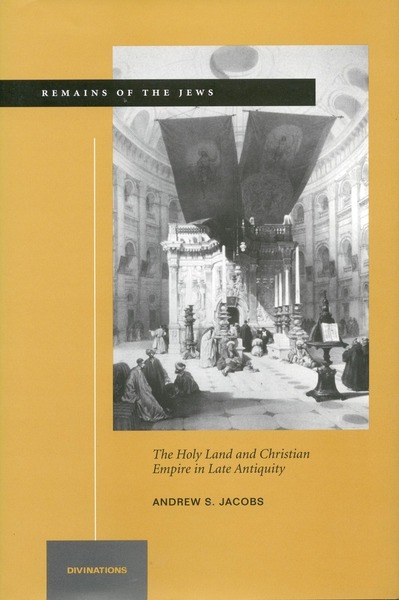 Remains of the Jews studies the rise of Christian Empire in late antiquity (300-550 C.E.) through the dense and complex manner in which Christian authors wrote about Jews in the charged space of the "holy land." The book employs contemporary cultural studies, particularly postcolonial criticism, to read Christian writings about holy land Jews as colonial writings. These writings created a cultural context in which Christians viewed themselves as powerful—and in which, perhaps, Jews were able to construct a posture of resistance to this new Christian Empire. Remains of the Jews reexamines familiar types of literature—biblical interpretation, histories, sermons, letters—from a new perspective in order to understand how power and resistance shaped religious identities in the later Roman Empire.

Andrew S. Jacobs is Assistant Professor of Religious Studies at the University of California, Riverside.

"This is an extensive and well-constructed book. The use of post-colonial criticism is novel and thought-provoking, and provides many new and interesting readings of relevant ancient literature. Jacobs makes his case with skill and enthusiasm."

"He presents the detailed exegetical, historical, and critical analysis of imperial Christianity in an accessible and highly engaging style."

"[Jacobs's] skillful use of postmodern and postcolonial theories, coupled with his solid knowledge of the relevant sources and scholarly literature, are remarkable....Overall this is a challenging and thought-provoking study that forces the reader to reconsider accepted assumptions and hypotheses."

"[Jacobs] gives smart readings of some familiar sources and draws connections that no one has seen before."