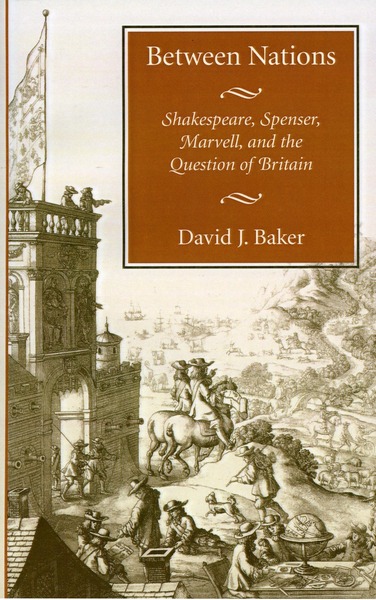 Between Nations
Shakespeare, Spenser, Marvell, and the Question of Britain
David J. Baker

Fusing historiography with literary criticism, Between Nations produces an array of unexpected readings of early modern texts. Starting from the premise that England has never been able to emerge or define itself in isolation from its neighbors on the British Isles, this book places Renaissance England and its literature at a meeting of English, Irish, Scottish, and Welsh histories.

It ranges from the late sixteenth through the late seventeenth centuries and deals with the "reigns" of three monarchs and one regicide—those of Elizabeth I, James I, Charles II, and Oliver Cromwell. However, it shifts the domain they ruled from the customary center into interactions between England and the other British polities. The author argues that England was able to develop into what we call a "nation" only in and by means of its relations with the other proto-"nations" that often it was also suppressing.

Among the authors who served one or more of the four English rulers are Shakespeare, Spenser, and Marvell, who are studied here in the way they responded to the complexities of British history that encompassed their "nation." They not only participated in nation building/destroying, but their works are shown often to be meditations on that process and their own roles in the process.

In Henry V, for example, Shakespeare both produces a vision of an ideal Britain and inscribes into his play the voices of various British peoples that are meant to be subsumed. Spenser's A View of the Present State of Ireland, which is often taken as an anti-Gaelic screed, is more plausibly seen as a text compounded of heterogeneous cultural influences, many of them originating from within Ireland. The complexity of the text reflects Spenser's own situation as a colonial official exiled from one British nation, England, to another, Ireland. In "An Horation Ode upon Cromwell's Return from Ireland," Marvell explicitly considers the consequences of a campaign that historians have called the "War of the Three Kingdoms." In that, and in a later poem, "The Loyal Scot," Marvell emerges as a shrewd commentator on the British politics of his day. Throughout, the book demonstrates that historical readings of this period's English literary works can be as multivalent and multicentric as the British history that produced them.

David J. Baker is Associate Professor of English at the University of Hawaii.