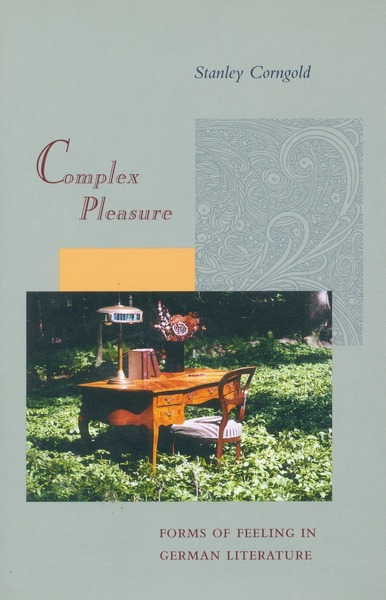 Complex Pleasure deals with questions of literary feeling in eight major German writers—Lessing, Kant, Hölderlin, Nietzsche, Musil, Kafka, Trakl, and Benjamin. On the basis of close readings of these authors Stanley Corngold makes vivid the following ideas: that where there is literature there is complex pleasure; that this pleasure is complex because it involves the impression of a disclosure; that this thought is foremost in the minds of a number of canonical writers; that important literary works in the German tradition—fiction, poetry, critique—can be illuminated through their treatment of literary feeling; and, finally, that the conceptual terms for these forms of feeling continually vary.

The types of feeling treated in Complex Pleasure include wit (the startling perception of likeness) and the disinterested pleasure of aesthetic judgment; Hölderlin's "swift conceptual grasp," in which "the tempo of the process of thought is stressed"; "artistic imagination," mood, sadistic enjoyment, rapturous distraction, homonymic dissonance, and courage as a mode of literary experience. At the same time, through the deftness, range, and surprise of its execution, the book itself conveys complex pleasure. The reader will also find fascinating, hitherto untranslated material by Nietzsche ("On Moods") and Kafka (important sections from his journals and from his unfinished novel The Boy Who Sank Out of Sight).

Stanley Corngold is Professor of German and Comparative Literature at Princeton University. He is the author, most recently, of Franz Kafka: The Necessity of Form and Borrowed Lives (with Irene Giersing.)

"Elegance and intelligence meet on virtually every page of this intriguing book. I was persuaded by the perspicacity and inventiveness of the individual chapters and even more by the cumulative effect of the readings [of Lessing, Kant, Hölderlin, Nietzsche, Musil, Kafka, Trakl, and Benjamin]."

"Written with enticing rhetoric and in an often-delightful polemical mode, Complex Pleasure vacillates between the temptation of a straight definition, whose premises are continuously undermined, and the pressure of literary texts, which emerges behind every theoretical demonstration. Thus, the book develops in the tension of the two languages, and keeps reflecting on itself, as it reflects the aesthetic experience."