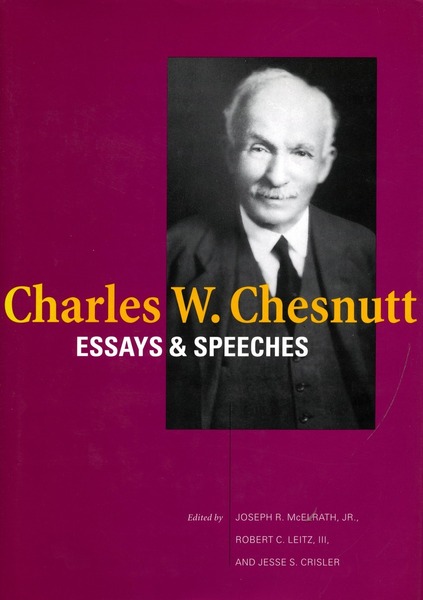 Over the past decade, increasing attention has been paid to the life and work of Charles W. Chesnutt (1858-1932), considered by many the major African-American fiction writer before the Harlem Renaissance by virtue of the three novels and two collections of short stories he published between 1899 and 1905.

Less familiar are the essays he wrote for American periodicals from 1899 through 1931, the majority of which are analyses of and protests against white racism. Collected as well in this volume are the addresses he made to both white and black audiences from 1881 through 1931, on topics ranging from race prejudice to the life and literary career of Alexandre Dumas.

The 77 works included in this volume comprise all of Chesnutt’s known works of nonfiction, 38 of which are reprinted here for the first time. They reveal an ardent and often outraged spokesman for the African American whose militancy increased to such a degree that, by 1903, he had more in common with W. E. B. Du Bois than Booker T. Washington. He was, however, a lifelong integrationist and even an advocate of “race amalgamation,” seeing interracial marriage as the ultimate means of solving “the Negro Problem,” as it was termed at the end of the century. That he championed the African American during the Jim Crow era while opposing Black Nationalism and other “race pride” movements attests to the way Chesnutt defined himself as a controversial figure, in his time and ours.

The essays and speeches in this volume are not, however, limited to polemical writings. An educator, attorney, and man of letters with wide-ranging interests, Chesnutt stands as a humanist addressing subjects of universal interest, including the novels of George Meredith, the accomplishments of Samuel Johnson, and the relationship between literature and life.

"The present volume is an invaluable addition to the growing body of work concerning this African-American literary pioneer. . . . Until now these pieces were almost completely inaccessible."

"A highly enlightening and impressive collection. . . . The present volume is an indepensable contribution to Charles Chesnutt and African-American historical and literary scholarship."

"This volume is a welcome and much appreciated contribution to African American literature and the scholarship that has grown up around it."

"This first-rate edition represents a signal achievement in the restoration of Chesnutt's oeuvre and in the editing of major African American writers. It reinforces and extends the outstanding reputation of it editors as leading Chesnutt scholars."