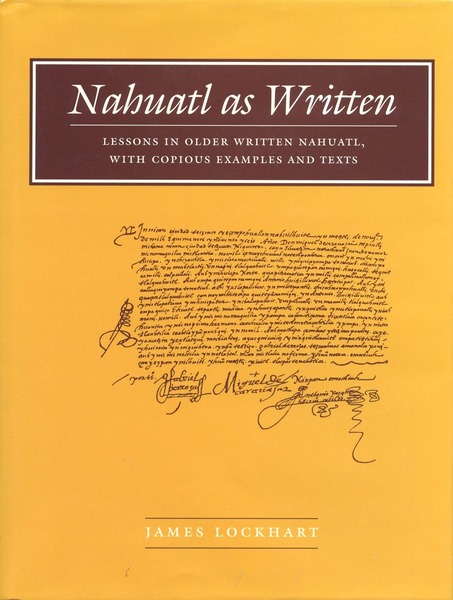 Nahuatl was the primary native language of central Mexico both before and after the Spanish conquest. It is the Latin of the indigenous languages of the New World. Its tradition of alphabetic writing goes back to the middle years of the sixteenth century and embraces not only grammars, dictionaries, collections of preconquest lore, and works of religious instruction, but also, above all, a great mass of mundane writing by the Nahuas themselves for their own purposes. Though the past quarter century has seen a flourishing of ethnohistorical, philological, and grammatical studies based on this corpus, those interested in the world of Nahuatl texts still find access to it difficult.

James Lockhart, an eminent historian of early Latin America, is also perhaps the leading interpreter of this large body of work. He has translated and edited a wide range of texts, analyzed their cultural and linguistic implications, and over the years trained a large number of students, several of whom have gone on to become well known scholars of Nahuatl and other indigenous languages.

Lockhart's main tools of instruction were: (1) a gradually growing set of lessons consisting primarily of examples culled from many sources of the sixteenth through eighteenth centuries (or concocted in the spirit of that time), and (2) the grammar or Arte of Nahuatl published in Spanish by the Florentine Jesuit Horacio de Carochi in 1645. In small groups of students, with a maximum of personal instruction and discussion, these materials accomplished their purpose, but the lessons were only in skeletal form, and the Carochi grammar, too, in the Spanish editions available, needed extensive explanation.

Now, Lockhart has organized and expanded these materials into volumes that can be understood by students working alone or used in organized Nahuatl classes. The two books together will allow any seriously interested person to master Nahuatl sufficiently to begin reading the texts, and they will provide essential reference works as one progresses. They are geared primarily to the older form of the language and its written texts, but they can also be extremely useful to those studying the spoken Nahuatl of later times.

Nahuatl as Written presumes no previous knowledge of the language. Treating all essential features of Nahuatl, it is organized on purely pedagogical principles, using techniques developed over many years of practical teaching experience. The book is in large format, almost like a workbook, with a great abundance of examples that serve as exercises; the examples are also available separately for the student's convenience. The orthography and vocabulary are those found in texts of the time, and the last several of the twenty lessons give the student training in working with texts as they were actually written. Some of the lessons deal with syntax in a way not found elsewhere and develop notions of anticipation and crossreference that are basic to Nahuatl grammar. In line with Lockhart's wish to bring more people into the Nahuatl documentary world, an Epilogue surveys many of the published Nahuatl texts and an Appendix presents substantial selections from ten different texts.

Carochi's 1645 Grammar is the most influential work ever published on Nahuatl grammar and remains an essential work of reference. The best recent grammars of Nahuatl are based on it, but they have not exhausted it. It includes an extensive discussion of adverbial expressions and particles that is found nowhere else, as well as an irreplaceable fund of authentic examples from the time, translated by a contemporary. Though a facsimile edition is available, the original is very difficult to read, and only a few experts can fully understand the seventeenth-century Spanish and Latinate grammatical terms. This new edition presents the original Spanish and an English translation on facing pages. Helpful footnotes provide explanatory commentary and more literal translations of some of Carochi's examples. The volume is at once an indispensable pedagogical tool and the first critical edition of the premier monument of the Nahuatl grammatical literature.

James Lockhart is Professor Emeritus of History at the University of California, Los Angeles. Among his many books are The Nahuas After the Conquest: A Social and Cultural History of the Indians of Central Mexico, Sixteenth Through Eighteenth Centuries (Stanford, 1992) and Of Things of the Indies: Essays Old and New in Early Latin American History (Stanford, 1999)

"A volume that can be understood by students working alone, as well as by those taking Nahuatl classes. Nahuatl as Written presumes no previous knowledge of the language. . . . [It] is being issued simultaneously with Lockhart's bilingual edition of Horacio Carochi's 1645 Grammar of the Mexican Language. . . . The two works are complementary."

"This book is clear and easy to use, providing all the essential elements one needs to undertake translation of Nahuatl documents. It transforms the effort of learning this fascinating but difficult language into an enjoyable and rewarding challenge. It is another notable achievement in Lockhart's impressive career."