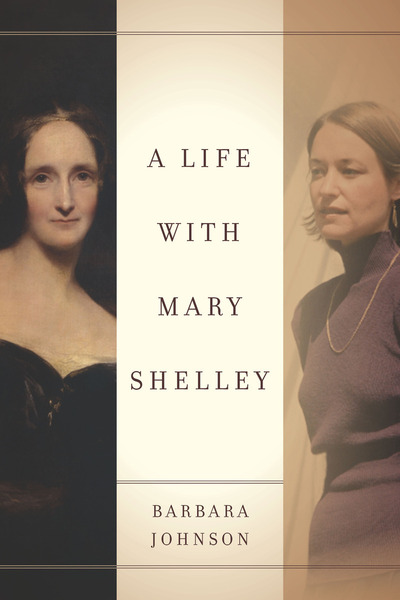 In 1980, deconstructive and psychoanalytic literary theorist Barbara Johnson wrote an essay on Mary Shelley for a colloquium on the writings of Jacques Derrida. The essay marked the beginning of Johnson's lifelong interest in Shelley as well as her first foray into the field of "women's studies," one of whose commitments was the rediscovery and analysis of works by women writers previously excluded from the academic canon. Indeed, the last book Johnson completed before her death was Mary Shelley and Her Circle, published here for the first time. Shelley was thus the subject for Johnson's beginning in feminist criticism and also for her end.

It is surprising to recall that when Johnson wrote her essay, only two of Shelley's novels were in print, critics and scholars having mostly dismissed her writing as inferior and her career as a side effect of her famous husband's. Inspired by groundbreaking feminist scholarship of the seventies, Johnson came to pen yet more essays on Shelley over the course of a brilliant but tragically foreshortened career. So much of what we know and think about Mary Shelley today is due to her and a handful of scholars working just decades ago.

In this volume, Judith Butler and Shoshana Felman have united all of Johnson's published and unpublished work on Shelley alongside their own new, insightful pieces of criticism and those of two other peers and fellow pioneers in feminist theory, Mary Wilson Carpenter and Cathy Caruth. The book thus evolves as a conversation amongst key scholars of shared intellectual inclinations while closing the circle on Johnson's life and her own fascination with the life and circle of another woman writer, who, of course, also happened to be the daughter of a founder of modern feminism.

Barbara Johnson was Professor of English and Comparative Literature and the Fredric Wertham Professor of Law and Psychiatry in Society at Harvard University.

Judith Butler is Maxine Elliot Professor in the Department of Comparative Literature and the Program in Critical Theory at UC Berkeley.

"[R]eading Johnson's A Life with Mary Shelley is no less compelling for the very reason that it so strikingly reveals what this 19th-century woman novelist meant over time to a scholar and teacher deeply committed to bringing a whole range of critical differences (gender and race being chief among them) into our scholarship and our classrooms . . . [A] work of tremendous economy, wit, and insight . . . Johnson has always been stylistically precise and pithy, lucid, and lively. Her final book is simply more of a good thing: feminist deconstruction pared down to its essentials and written for an ever-widening, and appreciative, audience . . . In the end this animated book brings to life the very thing Mary Shelley could herself hardly have imagined: the critical difference a supportive circle of women writers can make . . . This collaborative publication featuring the last words of a ferociously gifted literary scholar may well be, in the decades to come, the Yale School we remember, and miss, the most."

"Johnson's real gift was to tackle the 'dead white males' of the canon and reread them, looking for the women, ever alert to what she called 'muteness envy' in canonical poetry . . . [Johnson's] essays stress critical and creative vitality in the midst of death, and are still life-giving today, still radical, angry and passionate, yet always disciplined. Johnson asks acute questions, inserts the personal into her academic essays, and gives us new ideas about 'how to read'."

"This animated book brings to life the very thing Mary Shelley could herself hardly have imagined: the critical difference a supportive circle of women writers can make."

"One of this collection's many strengths is Johnson's talent for producing highly astute, informed and even (perhaps) revolutionary writing that is both entertaining and accessible . . . [I]t is the collected writing of a superb, generous, and talented writer and academic, on the subject closest to her heart—to which she returned over and again—and which is so fascinating that our own culture can't let it go. This is an academic book, but it isn't inaccessible: anyone whose imagination has been hooked from those first chapters when we meet the ailing Victor Frankenstein on the arctic wastes will find something worth engaging with. However you feel about this book, in the end it's worth reading, primarily because it does something exquisitely rare in academic literature, which is that it both feels as though you've somehow come to eavesdrop on somebody else's very interesting conversation, and also that it opens the discussion to the reader. Johnson's gift—the most precious of gifts—which is the talent of a teacher who invites her audience to actively, critically, and passionately participate in the conversation she has started, is apparent in every page of these works."

"Of singular importance as a set of contributions to theoretical debates, and filled with humanity, this book plays a major role in the transmission of Barbara Johnson's work. Johnson was brilliantly insightful, outspoken, witty, and endowed with an incredibly strong intelligence. These qualities are present at every turn of A Life with Mary Shelley, including the essays that frame her early and late writings."

"The publication, for the first time in this volume, of Barbara Johnson's last book Mary Shelley and Her Circle (2009) will be of interest to feminist theorists and literary critics alike Completed only a few weeks before Johnson's death, Mary Shelley and Her Circle is, perhaps one should say above all, a measure of the value of intellectual labor: Johnson's concise, yet pithy and unfailingly rewarding style is here refined in the relentless temporality of terminal illness." 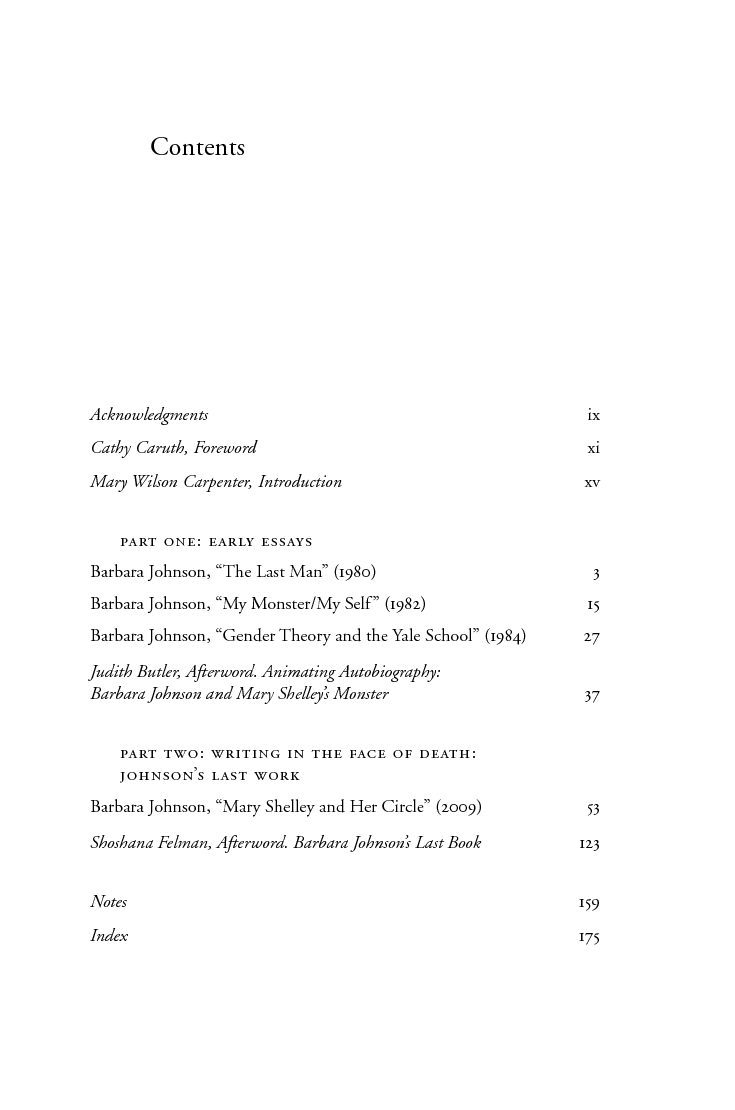 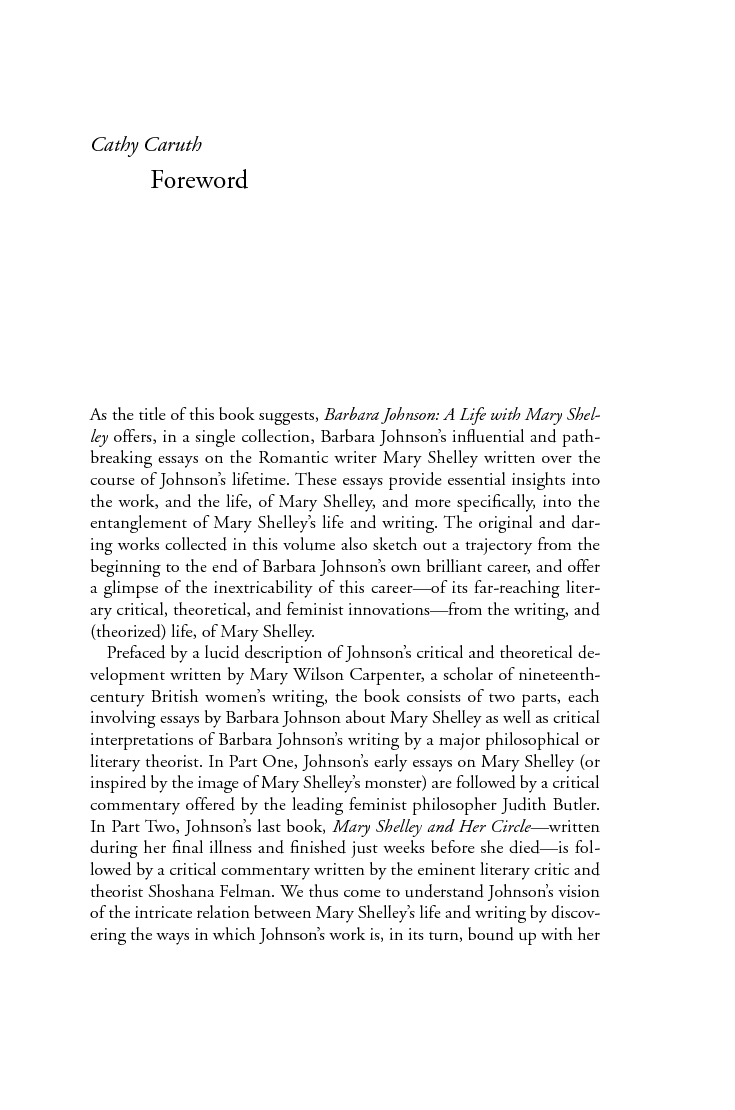 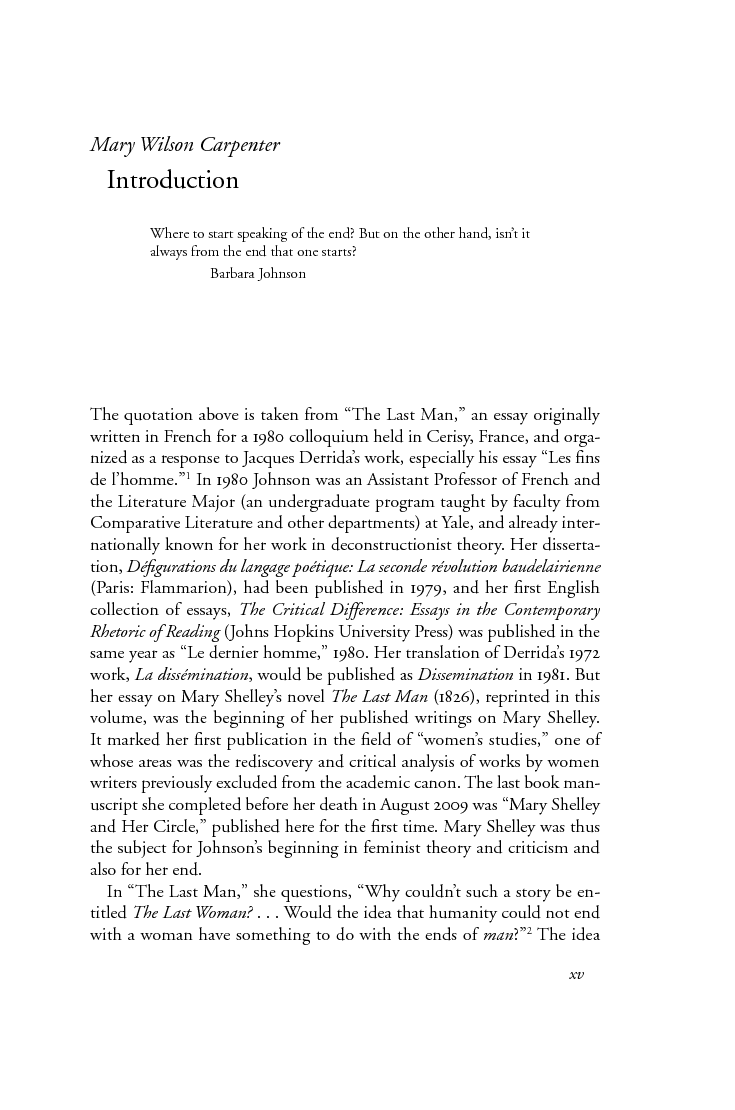